A remark by a supporter of Turkey’s Justice and Development Party (AKP) has created a domestic political crisis for Prime Minister Recep Tayyip Erdogan. 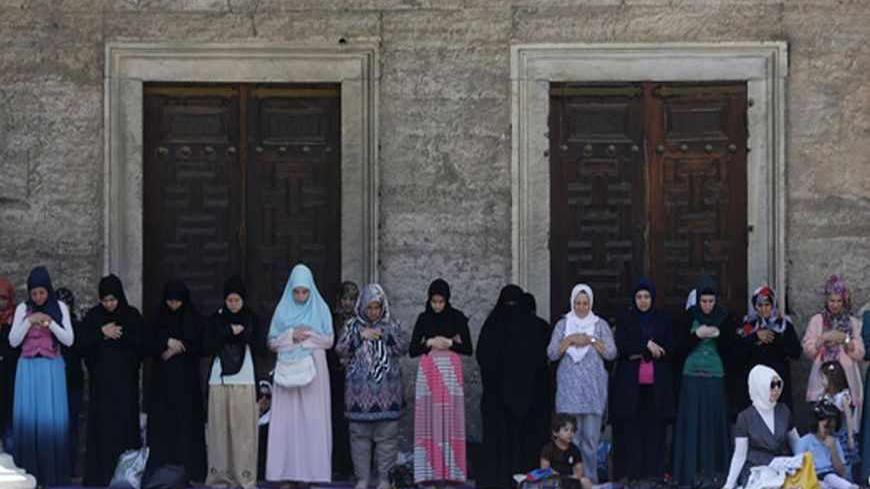 It is no wonder that Turkish soap operas — depicting a range of issues from equality between the sexes and the empowerment of women, to liberal lifestyles and contemporary forms of leisure — are so popular in the Middle East, where millions are clamoring for more equality and modernity in their lives.

But true life experiences and debates are much more relevant for the region than mere products of fiction, and Turkey certainly has no shortage of these, as the latest heated debate concerning the “morality of pregnancy” — which has been raging for days — clearly demonstrates.

It all began when Omer Tugrul Inancer, an Islamist lawyer and commentator on religion, asserted on the state-owned television network TRT that it was shameful for pregnant women to go out on the streets. He was speaking during a special Ramadan talk show broadcast just before iftar on July 26.

“Declaring your pregnancy with drums is against our understanding of decency. You cannot walk on the streets with such bellies. To get a bit of fresh air, a woman in the seventh or eighth month of her pregnancy can go around a little in her husband’s car in the late afternoon,” Inancer, who is also known to Islamic circles as an expert on Sufi mysticism, said. He went on to add that despite this, pregnant women of all shades are to be seen everywhere in Turkey nowadays, including on television, and added, “This is shameful, shameful! This is not realism, this is vulgarity.”

The outcry following Inancer’s remarks was instant with women from all walks of life protesting him. Protesters included pregnant women and their husbands as well as women and men feigning pregnancy and prominently displaying distended bellies. Most of the demonstrators saw Inancer’s remarks as more evidence of creeping Islamism in Turkey under Prime Minister Recep Tayyip Erdogan’s ruling Justice and Development Party (AKP).

Government circles and AKP supporters insist, of course, that Inancer’s remarks have nothing to do with them. Given the way Turkey has become divided along secularist and Islamist lines under the AKP, however, it seems almost inevitable that the finger of blame should be pointing at the government.

Inancer poured more fuel on the debate later, when he not only stood by his remarks, but added that the ugly sight of pregnant women was putting young girls off the idea of pregnancy. Not surprisingly, the topic went instantly viral on Twitter under #direnhamile (meaning “pregnant women resist”). This was clearly inspired by “#direngezi” (meaning “Gezi resist”), the battle cry for the recent Gezi Park protests. One highly popular Twitter post read “Down with pregnant women, long live storks!”

While the topic became the No. 1 social issue in Turkey overnight, it was clear that women on the Islamist side of the fence were not too pleased over Inancer’s remarks either. Ozlem Zengin Topal, a lawyer and the head of the AKP’s women organization in Istanbul, for example, said she also found Inancer’s remarks disturbing. “Of course pregnant women can go on the streets. It is their natural right,” she said.

But trying to deflect some of the anger away from Inancer — who is highly respected among Islamists — Topal nevertheless felt the need to add that she did not think the debate he had started was about pregnancy itself, but the manner in which some pregnant women dress.

“There are times when I, too, look around with surprise, and I wonder if it should be this way. Of course, everyone is free to dress as they like. But a person who says it should not be like this, should not be the object of intense attacks,” Topal said during an iftar dinner in Istanbul, adding that both sides in this debate were justified in their own way.

There were other female AKP supporters who were angered by Inancer’s words, but they were also equally angered over the manner secularists had, in their opinion, jumped on this latest bandwagon to lash out at the Erdogan government. Nihal Bengisu Karaca, a popular columnist for daily Haberturk, for example, wrote that she was “shocked” on hearing Inancer’s words.

“If you try to make candidates for motherhood, at whose feet you spread heaven, loose attitude shows you are not too worried about how women approach Islam, or if they cool toward it,” Karaca said, employing a literary, but strikingly hard-hitting tone for a devout woman.

She nevertheless also had harsh words for those who “attach the end of the pipe that discharges their hatred to the prime minister’s door.” Pointing at columnists who she claimed promote “Sex and the City-type lifestyles” — a reference to the popular and “risqué” US soap — she added the following:

“In every part of this country, every day, there are those who speak out on religion, modernity, being contemporary and the need to behave this or that way. Is it not just unfair, but the height of insincerity to pin everything said on the government and claim it is part of its ‘secret agenda?’”

Women on the secularist side, however, were much more merciless in their castigation of Inancer, while pointing an accusing finger at the AKP directly or indirectly.

“What is it you don’t find aesthetic (in pregnant women)? Is it that they are bloated? Are you fond of thin and elegant women, God forbid me for saying? When you see a woman on the street do your eyes slide toward her belly? How shameful,” Ayse Aral, one of daily Hurriyet’s popular female columnists wrote in response to Inancer.

In her article titled Sit Down You Ugly Pregnant Woman, Aral went on to characterize that women swell up during pregnancy as “an act of God,” and asked Inancer, “What kind of a Turkish mystic thinker are you?” The reference was of course to his expert knowledge about “Sufism,” a tradition within Islam that promotes humanism based on the idea of love for all creations of the creator.

Daily Vatan writer Ruhat Mengi, a remorseless critic of Erdogan and the AKP, was equally angry in her column titled Their Latest Trick: Hide Your Pregnant Women. Her use of the possessive pronoun was clearly aimed at Islamists who support the Erdogan government. Mengi was particularly angered by Inancer’s claim that pregnant women scared and discouraged young girls from pregnancy,

If Inancer is so interested in the welfare of young girls, she argued, then he should also talk about the rape of young girls in and outside their homes by their own fathers and uncles, as well as incidents of mass rape around the country and other similar occurrences reported daily which, she said, reminds one of the Stone Age.

This is not a unique debate for Turkey, of course, but it shows once again how the lines have been drawn among fundamentally different social groups, even if they are all Turkish. Similar topics that have already surfaced during the AKP government’s term in office — and caused angry public exchanges — include the question of how many children women should have. Erdogan repeatedly calls on them to have at least three.

Other such topics heatedly debated by Turks recently — and which are generally not touched on in the Islamic world — were abortion, cesarean section and even homosexuality, which a former AKP state minister in charge of family affairs, Aliye Kavaf, declared in 2010 to be a “biological deformity and a disease.”

But then Turkey’s uniqueness as a predominantly Islamic, but not Islamist, country perhaps lies in that it can have such public debates on such sensitive social issues, some of which are also heatedly debated in the West today.