What happened at anti-IS coalition meeting?

A diplomatic source participating in the gathering of the international coalition against the Islamic State told Al-Monitor that Turkey sought to undermine its regional rivals for its own interests. 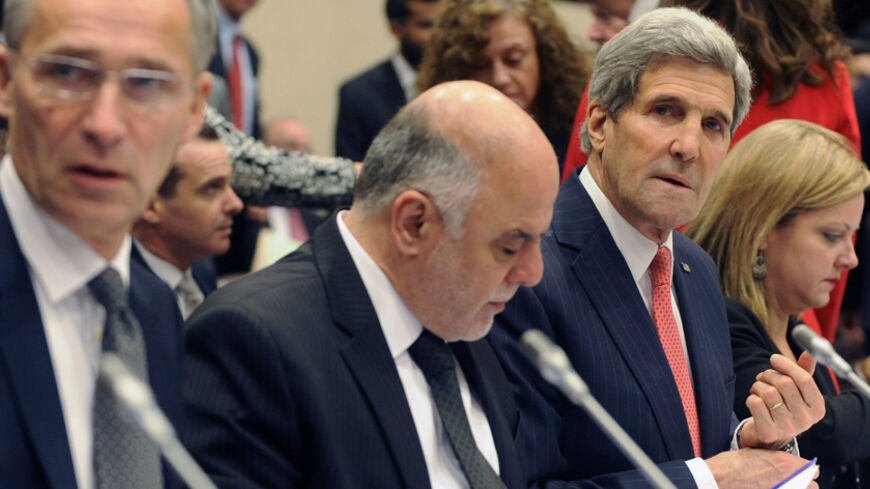 A Lebanese diplomatic source told Al-Monitor on condition of anonymity that two main issues emerged during the meeting of the international coalition against the Islamic State group (IS) and other groups at the NATO headquarters in Brussels on Dec. 3. First, there was a split between the United States and Turkey over the Syrian situation, and second, Washington was keen to focus its efforts on fighting IS and avoid the complexities of the thorny Syrian crisis and the stances of other parties on it.

These two issues become clear when comparing the draft statement set forth before the conference and the final text released after it was over.

According to the source, who participated in the meetings in Brussels, the preliminary draft had been prepared with a focus on the Syrian crisis, trying to present the war on IS as a war against the Syrian regime as well.

In the first draft of the text, Paragraph 11 focused on the UN reports regarding IS crimes of war and against humanity and civilians in Syria, reading, “Participants have pondered with great concern the suffering of the Syrian people, who live under the brutality of IS and the shelling of the [President Bashar] al-Assad regime. Participants have stressed their commitment to support the Syrian people in their efforts to confront IS, and to a transitional period based on the full implementation of the Geneva Communiqué, including increased support to the moderate opposition.”

The paragraph concluded, “Participants support the work of the moderate Syrian opposition forces fighting against IS inside Syria.”

The source said that upon receipt of this preliminary version, the participating countries expressed reservations. Some of these countries conditioned their attendance at the conference on the modification of certain expressions and terms, especially with regard to the Syrian issue.

The source said that the United States was first to respond to these reservations and expressed its readiness to work on finding an alternative final formulation, and the text was modified shortly before the conference opened. Paragraph 11 was reformulated as follows: “Participants have pondered with great concern the suffering of the Syrian people. They urge the parties to the Syrian conflict to respect the international humanitarian law and to facilitate humanitarian access to those who need it, as per the Security Council Resolutions No. 2139 and 2165.”

The new text went on, “A number of participants [which avoids implying a consensus] stressed the need for effective forces on the ground to fully defeat IS.” In this context, the participants are supporting the works of the moderate Syrian opposition forces fighting IS inside Syria. They also called for “increasing support for the moderate opposition forces that are fighting on several fronts, against IS, Jabhat al-Nusra and the Syrian regime.” Again, no consensus is implied.

The diplomatic source added that during the conference, Turkey tried to restore the first draft of the statement, but there was a firm objection on the part of the Lebanese delegation.

The intervention of Lebanese Foreign Minister Gebran Bassil was decisive. He asked, “How could you request us to support armed groups, which — as I have been just informed — carried out an attack against the Lebanese army on Lebanese territories, causing the death of seven soldiers?” Bassil was referring to the ambush by an armed Syrian opposition group against the Lebanese army patrol in Baalbek, in eastern Lebanon's central Bekaa on Dec. 3, during the Brussels conference.

Surprisingly, the US delegation did not comment on Turkey's requests, neither with regard to the reformulation of the preliminary draft nor the sudden demand to establish a no-fly zone in northern Syria.

Furthermore, according to the diplomatic source, US Secretary of State John Kerry thanked Saudi Arabia for its stance and support in his speech. His words were taken as an evasion of the Turkish demands, according to the source. Kerry also shook hands with Bassil and thanked him for his speech and comments.

Why did the United States stick to this balanced position? The source said, “There are many plausible reasons for that. One ought to consider the relations with Iran and the participation of Tehran in the airstrikes [on IS], which came at a time when the Brussels conference was being held,” and added, “There is also the critical competition in the relations between Saudi Arabia and Turkey, which the US is trying not to get involved in. Moreover, Washington is keen on Iraq’s stance in its war on terror.”

Most importantly it seemed that the United States intends to focus the efforts of the war against IS without getting caught up in other issues.

It was clear during the conference, according to the source, that the European Union was also committed to the fight against IS, given the great concern of the European delegations over “European jihadists,” their growth in European countries and most seriously, their return from Syria and Iraq to Europe.

“It was clear in Brussels that the West wants to eradicate terrorism, while Turkey sought to achieve political gains against its regional rivals. Eventually, the West’s views and priorities to eliminate terrorism had the upper hand in the conference,” the source concluded.