Why did President Recep Tayyip Erdogan begin using an incorrect Arabic acronym, Deash, in referring to the Islamic State immediately after his meeting with French President François Hollande? 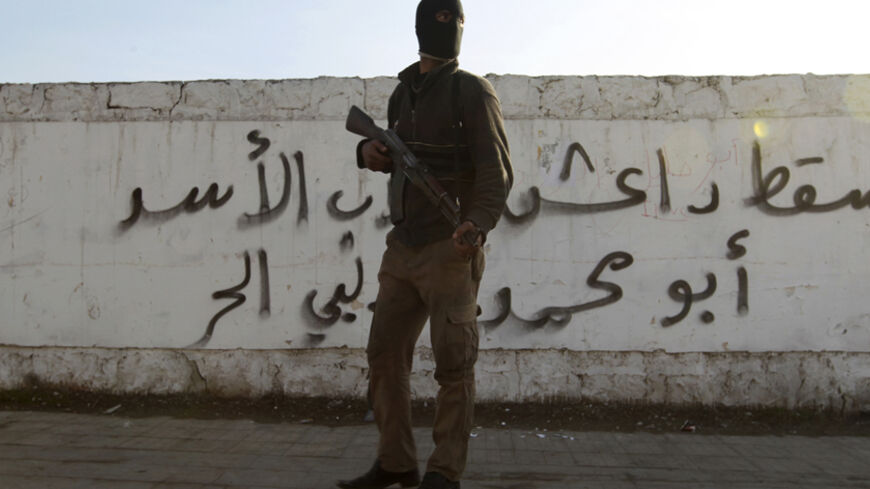 A Free Syrian Army fighter carries his weapon as he stands in front of a graffito that reads "Daesh (Islamic State of Iraq and the Levant) down," at Masaken Hanano neighborhood in Aleppo, Jan. 7, 2014. - REUTERS/Jalal Alhalabi

The middle aged among us remember the term “Kremlinologists,” used to refer to political scientists who analyzed and otherwise attributed meaning to the machinations in the closed world of the Soviet regime during the Cold War years. It appears that today “Erdoganologists” are needed to understand some of the language of Turkey's increasingly inward-looking “one-man rule.” In particular, a development during a visit to Paris Oct. 31 by Turkish President Recep Tayyip Erdogan has aroused the curiosity of budding Erdoganologists.

Erdogan had been using the acronym “ISIS” to refer to the Islamic State (IS, formerly the Islamic State of Iraq and al-Sham), but suddenly replaced it with the term “Deash” at a news briefing after meeting with his French counterpart, François Hollande. Later that day, he again used “Deash,” at an appearance at the French Institute of International Relations. After returning to Turkey, he addressed a mass rally in Istanbul’s Esenler district on Nov. 2 and made references to “Deash.” As anyone familiar with the group's Arabic acronym knows, this was wrong. The correct acronym is “Daesh.”

Here we have two questions for the Erdoganologists: First, why did Erdogan suddenly stop saying “ISIS” and began using “Deash”? Second, why is he mispronouncing “Daesh” as “Deash”?

It is well known that since Sept. 9, Hollande and other members of the French government have for political reasons been using “Daesh,” instead of “EIIL,” the French acronym for the jihadist group's name. While answering questions in the French parliament on Sept. 10, Foreign Minister Laurent Fabius had this to say on the subject: “The terrorist group [IS] is not a state. It wants to be one but it is not. I suggest we even avoid using the term ‘Islamic State’ because it can cause confusion by equating Islam with Islamism. As the Arabs say it, we should also say ‘Daesh.’ I will personally call them ‘Daesh cutthroats.’”

At the IFRI event, Erdogan explained why he began using ‘Deash’ instead of IS: “There are efforts to portray ISIS as an Islamic organization. For one thing, ‘Islam’ is a derivative of the word ‘sin,’ which means ‘peace.’ A religion that is based on peace will never allow terror. Please note, I am not using ISIS but ‘Deash’ because they are a terror organization.”

It was understood based on their statements that Fabius and Erdogan's common concern was to avoid making a terror organization synonymous with Islam. The difference between the two men was that Fabius approached the issue as a secular politician trying to be being respectful of the sensitivities of moderate segments of the Islamic world, while the Islamist Erdogan was defending his views from a religious perspective.

It is obvious that Erdogan realized that he did not even want to utter a transliteration involving “Islam” when he got to Paris, but even if Erdogan pronounced the Islamic State acronym as “Deash,” in Arabic the correct version of the group's full name still includes “Islam.” Erdogan’s abrupt switch to “Deash” from IS naturally aroused curiosity in Turkey. Some thought that it might well be perception management related to a change in ISIS policy.

Erdogan’s past contains other such examples of changes in labeling. For example, after he terminated his warm, family-like relations with Syrian President Bashar al-Assad in the autumn of 2011 and replaced them with hostility, the leadership, organization and media of Erdogan's Justice and Development Party (AKP) overnight dropped the name “Esad” (a Turkified version of Assad) and, without explanation, began collectively using “Esed” (which is pronounced like the original Arabic).

Another, still-raging example is how prosecutors and police affiliated with the Gulen movement were being called the “Cemaat” (congregation) by the AKP, but three days after the corruption and bribery scandal erupted on Dec. 17, they switched to calling the Gulenists the “parallel state.”

The commonality between these two examples is that both Assad and the Gulenists had been old friends and allies of Erdogan. No longer considered friends, they were simply rebranded after becoming the enemy. Here the intention is to erase memories, to make people forget those old friendships and create the impression that the new enmity had actually existed forever.

If the change from “ISIS” to “Deash” is the product of a similar effort at perception management, then one can conclude that until the recent past, the terror outfit known as IS had been a friend of the AKP government. If to now call IS “Deash” is implicit acknowledgment of an old friendship, Erdogan and his party could certainly not have been pleased about the need for a change.

Thirty-six days passed between Sept. 25 — when Erdogan for the first time finally called IS “terrorist,” in his UN General Assembly speech — and Oct. 31, when he called ISIS “Deash.” That it took so long to come up with a new name to erase the past and make their language compatible with the so-called policy change they had been bragging about, and that it required going all the way to Paris, would appear to point to a lapse in performance by Erdogan and his inner circle.

Ankara belatedly had to make changes in its IS policy. It could no longer sustain its policy of ambiguity concealed behind a smokescreen. It had no choice but to take a new position. The most undeniable example of this shift was allowing Kurdish peshmerga to pass through Turkey with their weapons en route to reinforcing fighters affiliated with the Democratic Union Party in their battle against ISIS in Kobani.

Of course, this has nothing to do with the proactive foreign policy about which the foreign policy architects in Ankara once boasted. Ankara was forced instead into a position of responding, in other words, playing reactive policies, under increasingly adverse regional circumstances and mounting external pressures.

That said, Turkey has not decisively become a real enemy of IS. If that had been the case, its air bases, notably Incirlik, would have been made available to the US-led coalition air forces for use in their airstrike operations against IS.

Perhaps not everyone requires an Erdoganologist to understand what is going on in this case. The signs, which everyone can see, appear to indicate that the “Deash” case developed along these lines: Erdogan did not have to go to Paris to adopt the term. If he had been aware, and he should have been aware, he would have known that the Arab media has been using “Daesh” since 2013. Erdogan should have been saying “Daesh” since the day he labeled IS terrorist.

But Erdogan did go to Paris. In bilateral talks and meetings, he heard the French saying “Daesh.” He liked it immediately and adopted it. He must, however, have misheard it, because he began saying “Deash,” instead of “Daesh,” and then continued to do so. Either there was no one around him who noticed or recognized his mistake, or there were indeed people in the know but who were too afraid to correct their leader. Same thing.

Soon, Foreign Minister Mevlut Cavusoglu began using “Daesh.” Although Cavusoglu has been using the correct term, the pro-AKP media has persisted in misquoting him as saying “Deash” — because that is the way the leader says it.