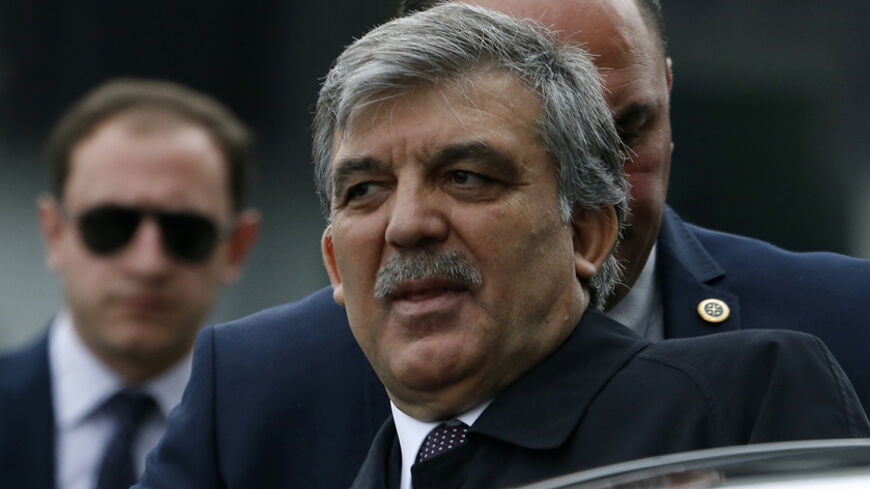 Turkey's President Abdullah Gul leaves after a meeting with his Georgian counterpart in Tbilisi, May 7, 2014. - REUTERS/David Mdzinarishvili

Last year in Turkey, the most widespread speculation was about the political future of then-President Abdullah Gul. Some speculated on a Putin-Medvedev style of swapping titles with Recep Tayyip Erdogan, while some wished to see him run against Erdogan. He was seen and believed to be the only person who could stop Erdogan’s march to absolute power and authoritarianism. The calculation was accurate. Gul was the only one.

But, those expectations did not materialize. Gul not only conveyed that he was either unwilling or incapable of challenging Erdogan despite their apparent differences on major issues, but he left the presidency in what was perceived as a humiliating manner.

Only a day after he had announced his intention to return to active politics in the ruling Justice and Development Party (AKP), of which he was a key founding member, the executive board of the AKP, chaired by Erdogan, called for an extraordinary party congress to convene a day before Gul was to officially step down.

If Gul had been allowed to return to the AKP before the congress elected a new party chairman to replace Erdogan (who had to resign to be elected as the ostensibly nonpartisan president), there was very little doubt that given his stature and reputation, Gul would have taken over as the new leader of the ruling party.

For Gul, not only was he betrayed by his former colleagues, but he was also cornered. The only option he had left if he wanted to run for the party leadership was to leave the seat of the presidency immediately. But that could have pushed Turkey into a new political and perhaps also an economic crisis. That was not Gul's style.

Gul seemed to ease into a “graceful” retirement, if not pushed into an eventual oblivion. Fewer and fewer people thought that he would ever come back, given his soft style, which was incompatible with the high-wire politics of the Erdogan era.

Yet, after nearly three months, he surfaced in Halifax, Canada. The occasion was the Halifax International Security Forum, which is considered one of the most important international gatherings on security on the globe. The November forum, a brainchild of Canadian Justice Minister Peter McKay, also a former foreign and defense minister, attracts statesmen, politicians, experts and opinion shapers from all over the world. Members of the US Congress, led every year by Sens. John McCain, R-Ariz., and Tim Kaine, D-Va., attend in growing numbers.

Gul’s attendance this year, for the first time ever, as the “Halifax Chat” session speaker, created as much interest in Turkish domestic politics as in international affairs. The president of the Halifax forum, Peter Van Praagh, told me that even if Gul had not uttered a single word, his mere presence would be sending signals to Turkey.

At a time when the politicians of the Western hemisphere in particular are displaying resentment of Erdogan, Gul’s presence as a guest of honor was significant.

At the Halifax Chat, he delivered a speech from a written text in which there was an unmistakably strong emphasis on his constructive contribution to all the issues that are high on the international agenda. The text of his speech was not distributed, but he made a copy available to me.

Gul’s recollection of his imprint as Turkey’s 11th president on a number of issues coincided with Western leaders’ increasingly negative perception of the anti-Western rhetoric of the 12th president, Erdogan, and of Erdogan's manifest noncooperation with Washington on Syria. It is noteworthy that Gul listed his stark differences from Erdogan at a predominantly Western but global forum.

He told his audience that his political career started at the same time as the Madrid Peace Conference on the Middle East in 1991. “Since that day, I have witnessed many initiatives, plans, projects and contacts launched to resolve various conflicts in the Middle East,” Gul said. “I personally contributed to some of these processes as a member of the parliament, prime minister, foreign minister and finally president of the republic. There were even cases where I took personal initiatives.”

Another interesting part of his talk was on how he regarded the carnage in the Gaza Strip, the atrocities committed by the Islamic State (IS) and the attack on the synagogue in Jerusalem as equivalent.

“Thousands of innocent people both in the region and outside have fallen victim to violence or terror originating from the Middle East,” Gul said. “Survivors have fostered feelings of spite, hatred and revenge. The tragedy experienced by the people of Gaza last summer, the atrocious murders of IS and victims at the synagogue in Jerusalem last week are the most recent examples. The despicable terrorist acts that took place in Canada last month, thousands of kilometers away from the region, was also a recent example to how contagious violence can be.”

That sounded so different than the selective treatment and the priority of importance formulated by Erdogan with regard to the violence in the Middle East.

The Palestinian question was another issue where he could remind the interested parties about his effectiveness.

“When I was elected the president of the republic in 2007, Palestinian President Mahmoud Abbas and Israeli President Shimon Peres came to Ankara to congratulate me and addressed the Turkish Grand National Assembly jointly. That atmosphere can and must be reinstated for a permanent solution.”

There he is, so different from his successor.

He left Halifax for London. It was not publicized back in Turkey, but he will deliver a speech at the Chatham House in London.

He told me that Istanbul would be his residence, not Ankara. He will routinely be working at a former royal Ottoman mansion being prepared as an office for him. He would move there by the beginning of the next year, 2015. From that post, he will be observing Turkey’s politics. Most probably, following the general elections, he will decide how he will get involved in the power game or in seeking office again.

The question is not rather, but how.

His presence and presentation in Halifax, Canada, has been a signal of his eventual return to Turkey’s political life.