Tunisia’s presidential elections are seeing a low youth voter turnout, as many young Tunisians are frustrated that the candidates are not addressing their core issues: employment and economic opportunity. 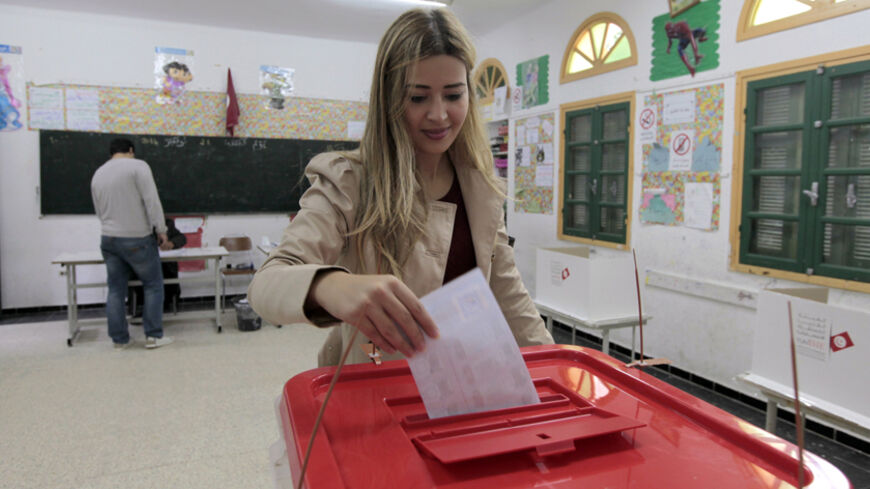 A woman casts her vote at a polling station during Tunisia's presidential election in Sousse, Nov. 23, 2014. - REUTERS/Anis Mili

TUNIS, Tunisia — Late Sunday afternoon, Nov. 23, Serine Limam, 21, purposefully strolled into a polling station in La Goulette, a suburb of Tunisia’s capital. She was resolute in her reasons for voting in Tunisia’s first free presidential elections. “It’s important for youth to vote because it is our future,” she told Al-Monitor.

Many of her friends did not feel the same way. “They think that, no matter what, Tunisia is not going to move forward and that their vote won’t change anything,” Limam said.

In Sunday’s election, Limam was the exception rather than the rule. By 4:30 p.m., youth comprised only about 10% of those who came to vote in the electoral district of Tunis 2, according to polling station director Noor al-Huda Sassi.

The trend of low youth participation was observed across the country, Wissem Missaoui, director of youth programs at Search for Common Ground in Tunisia, told Al-Monitor. “It was clear they were really not interested in participating,” he said.

Low youth turnout in the presidential elections reflects a sense of ambivalence and feeling of frustration toward the political transition shared by many young Tunisians.

The presidential vote came on the heels of parliamentary elections held last month. Both votes have been widely praised by observers as free and transparent, a major milestone in Tunisia’s democratic transition.

In the presidential race, 27 candidates vied for the symbolically important, but significantly reduced, office. Initial exit polls indicate that the two front-runners, Beji Caid Essebsi and Moncef Marzouki, will face each other in a runoff to be held next month.

Just as in the parliamentary elections, the Tunisian High Commission on Elections is reporting strong overall turnout, around 64% of registered voters. Many Tunisians ages 18-29, however, appear to have been pushed away from electoral politics.

The sense of disillusionment can be traced back to the high expectations young people had following the revolution, which was sparked by youth frustration with unemployment, economic marginalization and lack of social and political freedoms, Missaoui said. “They feel that their revolution was stolen by political parties,” he said.

Student Alaa Touil, for instance, was an anti-regime activist under former President Zine El Abidine Ben Ali and active in the revolution. He voted in 2011, a decision he now regrets. “I really believed in democracy and human rights. … I was expecting a lot of things,” he said. “I realized I’d been dreaming.”

Touil, 22, did not vote in either of the recent elections. “I just want to live my life without politics,” he told Al-Monitor.

Seif El-Hammami, a street vendor in Tunis, is similarly disillusioned. He thinks the presidential candidates all lied in their campaigns. “They all promised that they will employ people and that the situation is going to get better, but it’s just talk,” he said, saying he has struggled to make ends meet due to rising inflation since 2011.

Even for young Tunisians who are planning on voting in the presidential elections, the polarization of the country’s politics is a major source of frustration.

National security and improved foreign economic relations were the issues voters were most concerned about heading in to Sunday’s polls. However, Essebsi’s camp pushed the association between Marzouki and the widely disliked coalition that governed the country for the past three years, led by the moderate Islamist Ennahda movement.

Likewise, Marzouki said that supporting Essebsi, who served in the government under the country’s previous autocratic governments, would essentially be a vote for the return to the old regime.

The divide mirrored the parliamentary elections, which were primarily viewed as a contest between Essebsi’s anti-Islamist coalition party Nidaa Tunis and Ennahda.

For many young Tunisians, the ideological debate between the two poles, whether modernist versus Islamist or old regime versus new regime, misses the point. “Young people obviously weren’t interested in these topics,” Asma Laabidi, a 25-year-old media producer, said. “They are seeking social justice. They are seeking more job opportunities.”

Walid Derouiche, a computer science engineer, views the ideological division as a major problem in Tunisian politics. “The president should be in the middle,” he said, “so the [two sides] can live with each other.” He did not see any candidate who was interested in playing this role or in focusing on youth issues.

Instead of voting for a candidate he really supported, Derouiche, 28, who places himself on the modernist side of the political spectrum, chose between what he described as the lesser of two evils. “For me, I will choose Essebsi, not because I like Essebsi, but I don’t have any other candidate to vote for,” he said, before going to vote.

Student Rihab Mejri, 21, shares Derouiche’s frustration with the front-runners. Instead of choosing what is commonly referred to in Tunisia as a "utility vote," she voted for a third candidate, Hamma Hammami of the leftist Popular Front. “I think that everyone should be strong-willed,” she said. “If we all vote for someone other than [the front-runners] … then we can [make a change].”

In the next round of voting, however, there will only be two candidates on the ballot, something that will likely even further isolate the youth from the electoral process.

“So many people will be boycotting because they don’t see themselves in the projects of either of the candidates,” Achraf Aouadi, president of the Tunisian elections monitoring group I WATCH, said. “If we had a hard time getting the youth out for these elections, it will be even harder for the runoff.”