The Syrian army's recapture of a gas field from the Islamic State represented a strategic and symbolic victory, securing the country's electricity supply and protecting central Syria from further attacks. 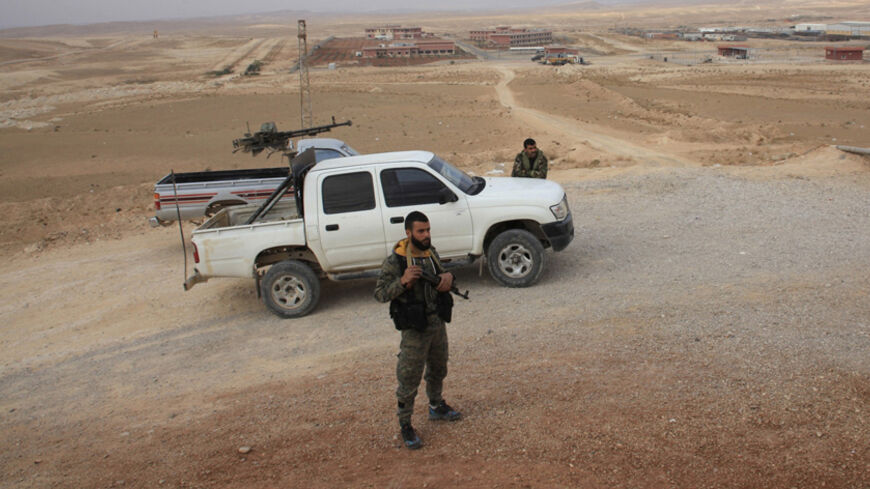 Forces loyal to Syrian President Bashar al-Assad stand beside a military vehicle in the Mahr and al-Shaer gas fields after regaining control of the area, in the Homs countryside, Nov. 15, 2014. - REUTERS/George Ourfalian
Khaled Atallah
November 18, 2014

HOMS, Syria — Following fierce battles, the Syrian army recaptured the al-Shaer gas field from the Islamic State (IS) Nov. 6, for the second time. IS fighters had taken control of the field, 110 kilometers (68 miles) east of Homs, and the surrounding hills at the end of October. Al-Monitor visited al-Shaer on Nov. 7.

The fight for the territory caused significant destruction to the gas field's facilities, especially the main plant, which feeds into the Hayan gas field, from which gas is distributed to networks along the coast and to the south. The army was quick to install fortifications, especially on Zimlat al-Maher Hill, also known as Syriatel Hill. The bodies of IS fighters lay scattered around the desert terrain near the field, alongside equipment destroyed in the clashes and sweeping up operations ongoing in the vicinity.

According to a Syrian army officer who participated in the fighting, the operation began at dawn on Nov. 2, two days after the renowned Col. Suhail al-Hassan was called upon to oversee the recovery of the strategic field. The officer told Al-Monitor that the army had begun to establish its positions by taking strategic hills, most notably Zimlat al-Maher. It then encircled al-Shaer to begin attacking IS positions, including at the main station and seven wells.

Speaking on condition of anonymity, the officer said that the army's control of the Palmyra-Homs road, securing the Martyr Omar Ayas Airport (also known as T4) and intense shelling and air raids had led to the collapse of IS fortifications. The IS fighters who survived retreated to the desert road in the direction of Palmyra. The army's rapid progress can be attributed to Hassan's strategy of high-intensity attacks on enemy positions while making swift land assaults. According to the officer, these actions were followed by calls for reinforcements from the Desert Falcons, an elite force expert in desert fighting.

The recovery of al-Shaer is important because it helps the regime secure central Syria against IS attack. It is part of the primary artery connecting eastern and western Syria, according to retired army Col. Hafez Nabil. "The Syrian army’s takeover [of the field] restored stability to the electricity sector. After IS gained control of the field, this clearly contributed to the electricity crisis suffered in most of Syrian territory," he told Al-Monitor from Damascus.

Nabil also said that IS control of the field and surrounding hills had adversely affected Syrian aerial reconnaissance missions. "The T4 and Shairat airports, which are the two most important military airports, are located near the field. They serve as a central point for launching air raids in the country. IS' control of the field hindered movement at the two airports and put pressure on one of the most effective military tools," Nabil said. He said this situation, in addition to the electricity problems, were key factors in the speed with which the army moved in the operation to retake al-Shaer.

The retired colonel said that the fight carried great symbolism for the Syrian army and the political authorities in terms of not allowing the field to remain in IS hands. It was especially important after the deaths of a large number of people in the first battle, in July, and the resulting grievances voiced by regime supporters. The Syrian army had previously regained control of the gas field in July 27, after IS militants stormed it on July 16 and massacred the field's guards and civilian employees.

IS' primary goal in attacking al-Shaer has not been to gain control of the field as a source of gas, but to control the surrounding hills. This would allow the group to secure expansion toward rural Homs and Hama, controlled by government forces.

Tamer Kayal, a journalist specializing in military affairs, told Al-Monitor, "Through gaining control of the field and surrounding hills, IS sought to control territory into the central region and progress as much as possible, especially after the strikes the group suffered in the north. Al-Shaer hills are an important region for linking IS' military weight in Anbar, Raqqa, rural Hasakah, rural Aleppo and rural Homs. [Their control of this region] also threatens nearby military airports, which would be the group's next target after the field and its hills."

Kayal further stated, "Had IS been able to maintain control of the field, this would have enabled it to fully control the electricity sector in Syria, which relies heavily on gas." He ruled out the group being able to benefit from the field, because it does not have the capacity to extract gas.

According to an engineer working in the field, al-Shaer produces 3 million cubic meters of gas a year, all of which is used to generate electricity. The crude gas is transformed into gaseous fuel at the adjacent Ebla plant (also threatened by IS), 10 kilometers (6.2 miles) from the al-Shaer field. The gas is then linked to a 77-kilometer (49-mile) pipeline that sends it to the national grid. The Ebla plant produces around 120 tons of gas a day for household use along with some 2,500 barrels of condensate in addition to 2.5 million cubic meters of clean gas.

US-led airstrikes had hit IS targets in the area, but stopped shortly before the militants regained al-Shaer field on Oct. 30. Haidar, a member of the National Defense Forces protecting the field, told Al-Monitor, "Coalition aircraft bombed a number of areas located just a few kilometers from the field. These areas were points of consolidation for IS fighters, which they used to prepare for their attacks on the field and surrounding hills. However, these raids stopped about two weeks before the IS attack on al-Shaer field." On Sept. 27, the international coalition had targeted al-Hamad desert region, to the east of Palmyra. IS had taken control of this region while expanding into the Deir ez-Zor countryside, using it as a gateway to reach al-Shaer.

The resumption of clashes between the group and government forces on the region's outskirts suggests IS has not given up on taking control of al-Shaer region. It seems, however, that government forces and political authorities are intent on preventing a repeat of engagements like the one on Aug. 24, with the fall of the Tabaqa military airport and the 17th Division along with the squadron of warplanes there. Thus, the army has called upon its most experienced leaders and trained forces for this decisive battle.