Louay Hussein, leader of the opposition Building the Syrian State movement, has been arrested Nov. 12 by regime forces on the Syrian-Lebanese border. 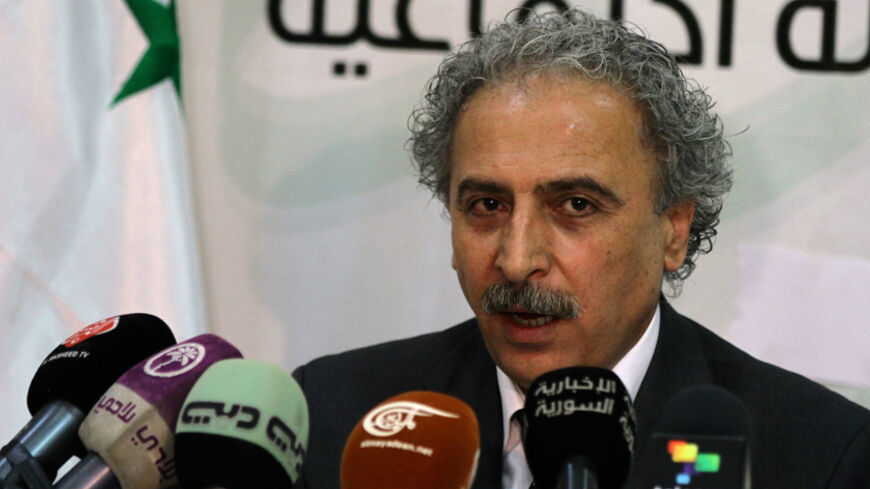 BEIRUT — Syrian security forces arrested opposition figure Louay Hussein Nov. 12 on the Lebanese-Syrian border while en route to Beirut, where he was due to fly to Spain to visit family living there since early 2012.

His political party, Building the Syrian State (BSS), reported that Hussein was arrested that afternoon on the Syrian-Lebanese border and referred to the judiciary in Damascus. The movement demanded his immediate release, blaming the Syrian regime for any harm that might befall him.

BSS deputy leader Anas Joudeh told Al-Monitor by phone from Damascus, “This arrest comes within the framework of the Syrian regime’s ongoing acts of suppression and clamping down on political freedoms and opposition politicians. We are surprised by this arbitrary arrest, which Syrians have become accustomed to.

“Hussein was referred to the first investigating judge facing ready-made charges fabricated by the Syrian regime, as is the case with any pro-opposition political activist. He has been accused of ‘weakening national sentiment and the morale of the nation.’ Hussein is still detained at the Justice Palace in Damascus, waiting to reappear before the judge again tomorrow,” Joudeh added.

Hussein is a prominent Syrian opposition politician and writer. He was among the first opposition activists to be arrested following the outbreak of the popular uprising in Syria. He was arrested on March 22, 2011, after issuing a statement expressing solidarity with the people of Daraa and supporting their peaceful demonstrations and freedom of speech. Hussein continued his activism following his release in June 2011. In September 2011, he founded the BSS movement with the participation of a broad spectrum of intellectuals and activists in Syria. Hussein is independent of the main opposition coalitions, the Syrian National Coalition (SNC) based in Istanbul and the National Coordination Committee in Damascus, but maintains cordial ties to the latter. His relationship with the SNC is distant, given their divergent points of view on foreign intervention — which Hussein opposes — but personal contacts remain nonetheless.

Joudeh said that the movement is likely to continue working from Syria without being licensed by the regime, which does not recognize it as a legitimate political group. According to Joudeh, this could have been another pretext for the arrest. He confirmed that BSS will issue an official statement after making sure that Hussein is safe and learning the details of his arrest.

The arrest came several days after BSS’ sudden withdrawal from its own initiative, which called on all political parties in Syria to issue a statement to stop the advances of the Islamic State. On Nov. 2, the group also issued an official statement titled, ''Louay Hussein calls on Syrians to save their country: The regime is collapsing, which will not benefit anyone.'' This may also have provoked the arrest.

In the statement, Hussein said, "The Syrian regime is aging and breaking down,” stressing that the presence of the president in his palace, with thousands of soldiers protecting him, does not change this reality. He believes that the collapse of the Syrian regime would not work for the benefit of anyone. He called upon all Syrians — whether pro- or anti-regime — to speak up and take action to save the state, through a political settlement that would replace the regime with a coalition government, including pro-opposition and pro-regime members as well public figures “who would have the capacity to protect the country."

In an another statement, Hussein told the Binaa News Center, "The regime is unable to protect national sovereignty, as the jets of the US alliance have been given free rein to soar in the skies of Syria. Meanwhile, Kobani is no longer on the Syrian map, as it has become a free zone under US auspices. Today, the regime is absolutely incapable of protecting the country.

“The regime claimed that it had achieved victory, yet the Golan Heights is out of its control, while IS controls all the areas in Raqqa,” he added.

As for the timing of the arrest, Mouna Ghanem, a member of parliament with BSS, said in a phone interview with Al-Monitor from Damascus, “We have been active in Syria for three years and our national agenda is very clear. I hope that this arrest will turn out to be a mistake and is corrected soon.” She said Hussein did not commit any criminal offense and is a peaceful activist.

Ghanem denied the rumors circulating in the media that the arrest was connected to BSS’ latest statement, saying, “Our stance on the unity government is clear in all BSS’ documents and statements that have been made over the past three years. Our position is not new,” she told Al-Monitor.

Ghanem explained why BSS suddenly pulled out of its anti-IS initiative: “There were many reasons behind BSS’ withdrawal from the initiative it started. One of the reasons was the fact that pro-regime forces did not agree with the need to form a unity government that would pave the way for fair democratic elections.”

She added, “But the main reason behind our withdrawal was the mistreatment we have been subjected to by some political forces affiliated with the regime at home, which were also part of this initiative.”

Ghanem warned the arrest will disrupt the path to a political solution and negotiations, adding, “However, BSS will continue its quest to create negotiating paths contributing to finding a peaceful and political solution to what is happening in Syria.”