The Syrian state media has been promoting a false image of the country and its capital, spreading images of untouched cities and holding entertainment events, while the war rages on in the opposition areas. 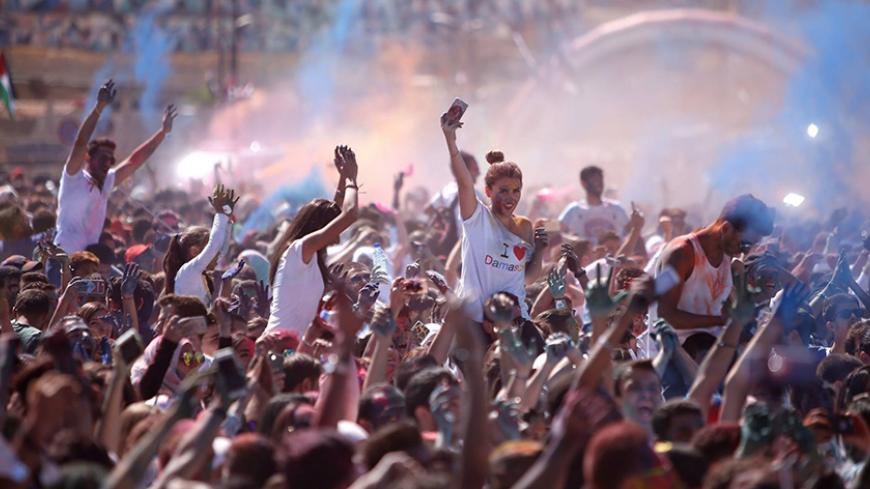 DAMASCUS, Syria — The Syrian regime has recently been trying to portray life in areas under its control as glamorous, leading followers of the Syrian Arab News Agency (SANA) page and the Ministry of Tourism on Facebook to think that Syria is living a golden age characterized by prosperity, tranquility and recreational activities.

This seemed apparent in the latest promotional video the Syrian Ministry of Tourism posted on its Facebook page Oct. 20. In the video, Damascus is shot from a lit sky and appears calm and at its best, as if no war has ever targeted the city.

In the same context of promoting a distorted image of life in Damascus, the ministry had launched on Oct. 7 the “I love Damascus” marathon, under the supervision of the Damascus Youth Voluntary Team. The event, called the “Color Marathon,” came at the same time as World Smile Day and the October War Anniversary day.

Around 2,000 participants gathered in al-Jalaa Garden on the Mezze Highway in central Damascus wearing “I love Damascus” shirts specifically designed for the event. To the sound of songs coming out of Hummers and glorifying the army and the president, they walked to Umayyad Square, where they threw colored powder at each other in the presence of Syrian Minister of Tourism Bishr Yazigi. A big “I Love Damascus” sign was erected in the middle of the square.

Pro- and anti-regime activists said on social networking sites that the event was provocative. “Respect the martyrs' blood and the tears of mothers! Respect the blood of innocent civilians! Respect the hunger of this country’s poor people,” Rima Haddad, an activist, said on Facebook. Others, according to the Ara News website, said the event was a comedy.

The marathon promotional video, published by the Ministry of Tourism on Facebook, was shot with a drone in order to show beautiful pictures of the marathon and show that the event represents the true face of Damascus. These pictures, according to activists, only represent the useful Syria where the regime controls and protects its supporters.

Pro-regime pages, such as the Dimashq Now page, published pictures of the marathon and raised the ire of social media users, who were surprised that the participants would take part in such an event in a war-torn country. Syrian opposition activist Mouna Ghanem, vice president of the Building the Syrian State movement, said Oct. 8 on her Facebook page, “Rich kids are throwing colors at each other as poor kids are stained by blood.”

In response to the event, activists published pictures on social media from Rif Dimashq and Aleppo showing the contradiction between the Syrian state media images and the reality on the ground. Also, a picture of a mother and her son sleeping on the streets of Damascus went viral and was published by several media outlets. Paradoxically, the mother and her son were sleeping on the same Mezze Highway from which the event kicked off.

Social media user Nawar Khalil mocked the marathon on his Facebook page and commented on the picture of the mother and her child by saying, “Those were very close to the color marathon but unfortunately only got the black color on the Mezze Highway. Neither the highly esteemed governor nor the tourism minister managed to see them. May God be with you, dear ones!”

The marathon video was not the first video to provoke the Syrians. On Sept. 29, the Ministry of Tourism had published a promotional video for the city of Aleppo, which has been bombarded by Russian airstrikes since Sept. 19. The ministry subsequently deleted the video from its Facebook page after being criticized by media channels such as Al-Arabiya Al-Hadath website and Al Jazeera.

The Aleppo video was one of a series of promotional clips published by the Ministry of Tourism and SANA under the slogan of its advertising campaign “The Will to Live” in support of tourism in Syria. The video shows the western part of the city of Aleppo, which is controlled by the regime, but neglects its eastern part, which, according to The New York Times, is similar to Berlin in 1945.

To embellish the image of the regime, Syrian media outlets are using educated and modern youth to create an impression among Westerners that regime-controlled areas are full of freedom, prosperity and equality as opposed to the militancy, terrorism and extremism in the opposition-controlled areas. They are trying to show that bombing and destroying these areas is justified to maintain security and stability in regime-controlled areas.

This regime mentality seemed clear in the promotional video published Oct. 14 by the photographer who goes by the name 3adstna (Arabic for “our lens”) where a group of “cute” girls are shown playing basketball and swaying in front of the camera in a Hollywood-like movie. Luxurious and clean gyms also appear in the video to promote the Syrian league for women’s basketball. In the picture published by SANA, the girls look like models or like girls promoting a world championship.

This campaign to convey a different image of Syria surprised the Russian journalist who President Bashar al-Assad hosted in his palace for an interview broadcast by SANA on Oct. 14. During the interview, the journalist, Daria Aslamova, said to Assad, “The images provided by the Syrian media make the viewer imagine that there is no war taking place in Syria and that you are living in a time of peace. There are many television programs about children, schools and sports, and little about war — this is exaggerated. I watch and think to myself: Oh my God, I am in a country where I hear about mines exploding in cities, but I don’t see that on Syrian television.”

She added, “It's good to raise the morale of citizens, but not at the expense of a real war. You have to explain to them that there is a real war. I don’t like this image of peace on television: It doesn’t exist here.”

Assad said the media outlets are well-aware of what is happening, but “we have to create a balance to keep us closer to a normal life.”

In a related incident, a wedding video of well-known figures in the Syrian regime went viral on Facebook Oct. 13. The Lebanese Al-Modon website described the wedding ceremony in Syria as legendary, and Syrian opposition activist Bassam Yousef posted on his Facebook page information explaining that the wedding was for the daughter of Assad's office director and the daughter of the president of the National Defense Forces, Bassam Ahmad Hassan, and the son of pro-regime and renowned businessman Naeem al-Jarrah. Yousef pointed out that the wedding was sponsored by the grand mufti of Syria, Sheikh Ahmad Hassoun, and that Assad’s gift to the newlyweds was a car worth $150,000.

Yousef added in his post, “Every drop of blood shed by your children infers more money piling up in the accounts of these killers. … Do you still believe that your children are being killed in the defense of the homeland? What a lie!”

Yousef said in another post on his page that the wedding cost $1 million. He addressed regime loyalists by saying, “Dear Syrian loyalists, these are the ones killing you. These are the ones who destroyed Syria and looted and brought all types of scum and occupations in the world to the country, including IS [Islamic State]. These are the ones lying to you and saying that they are defending their homeland.”

Despite the intensive campaign the regime is leading in the media to promote an embellished image of Syria to the West — a safe Syria where peace prevails — it will not be able to deny the hundreds of daily photos and videos spread on Arab and world media. These images show the real destruction the Syrian regime’s war machine leaves behind. The regime’s campaign has even infuriated its supporters, who consider these images that the regime is trying to portray about life in Syria to be untrue.