Russian Foreign Minister Sergey Lavrov, ever skeptical of US intentions, elaborates on Russia's policies in the Middle East — and risks alienating the West. 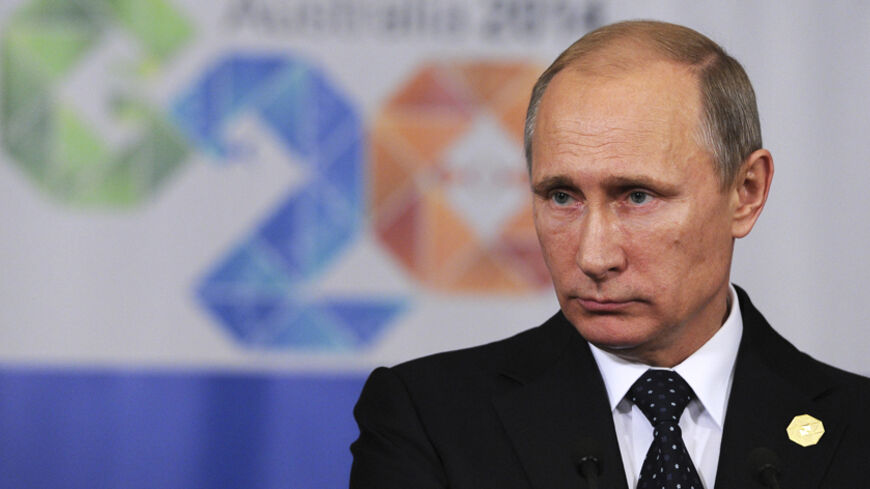 Relations between Russia and the United States, as well as between Russia and US-oriented European countries, further deteriorated following the G-20 summit in Brisbane due to the crisis in Ukraine. This poses the question for analysts as to how this situation might affect Moscow’s Middle East policy and the existing forms of cooperation with the West on regional issues, namely: the Middle East quartet of international mediators; the negotiations of the five permanent members of the UN Security Council plus Germany (P5+1) with Iran; the stabilization of the situation in Yemen; and the fight against terrorism.

Naturally, this kind of cooperation will be preserved, with Russia even bearing some of the political costs. For example, at the 2014 Conference on Non-Proliferation held in Moscow, one of the Iranian participants criticized Russia for its position in the P5+1 talks with Iran — clearly hinting at Russia’s solidarity with the West, rather than with Iran — to which the Russian participant emphasized that in this Moscow was guided exclusively by its national interest.

At the same time, the director of the Center for Energy and Security Studies, Anton Khlopkov, deplored the tendency to politicize the problem: “It is very unfortunate that this is now noticeable in the relations between Russia and the United States. I have always thought that concerning non-proliferation our interests — of both Moscow and Washington — coincide. Recently, however, on the initiative of our American partners, cooperation on a number of projects has either been frozen or suspended.” The position of the former UK representative to the International Atomic Energy Agency (IAEA), Peter Jenkins, drew the attention of experts. He expressed regret that “the Obama administration makes unrealistic promises to Congress,” when it ensures that “it won’t give Tehran the opportunity to create its own nuclear bomb.”

The general atmosphere of mistrust between Russia and the West, especially the United States, also has an impact on Middle Eastern issues. Thus, in Conflicts Forum’s Weekly Comment for Nov. 14-21, it was noted that Russia sees radical Wahhabism and the Islamic State (IS) “as simply another [Saudi-Western] tool that equally can be ‘switched on’ to undermine Russia’s security.” And for Russia and its allies, the next question is: “Does the United States truly want to ‘degrade and destroy’ [IS]?” In this regard, some Western analysts recall accounts that appeared in the Western media after Prince Bandar bin Sultan’s visit to Russian President Vladimir Putin in July 2013. On that occasion, the prince allegedly suggested that the Russian president “abandon Syria,” and “Saudi Arabia would protect the Sochi Olympics from Islamic terrorists.”

Citing the Lebanese paper Al-Safir, the British Daily Telegraph even reported that Bandar added: “The Chechen groups that threaten the security of the [Olympic] Games are controlled by us.” He also reportedly promised to maintain Russia’s base in Tartus, “if the Assad regime is toppled.” It was reported that Putin indignantly rejected these and other proposals by Bandar. This is certainly not the language with which one can influence the Russian leader.

Russian suspicions were reflected in Foreign Minister Sergey Lavrov’s speech at the 22nd annual assembly of the Council on Foreign and Defense Policy in Moscow on Nov. 22, which contained several major points relating to the Middle East. An important topic in Lavrov’s statement, it seems to me, was the notion of “Christianophobia” and the need to protect Christians. He stated that next week he intends to raise this issue at the meeting of OSCE foreign ministers and that, on this subject, most EU politicians “fade into the shadows.” He reproached European leaders for being ashamed even to mention “the Christian roots” of European civilization during the discussion of the draft EU Constitution in the recent past. “If you do not respect your own roots, then you are not going to respect the values and traditions of others.” It is evident here that Russia is positioning itself as the protector of Christians in the world within the philosophical framework of “enlightened conservatism,” which is based on traditional values. Thus, the principles emanating from the Islamic segment of Russian society are also included in the overall construction of this “field of traditional values.”

Another item in the speech concerned cooperation with the Syrian regime in the fight against IS. In my opinion, it is significant in this part of the statement that the Russian foreign minister did not defend Syrian President Bashar al-Assad, but first and foremost stressed that Syria was a sovereign state and a member of the United Nations — from which it hasn’t been expelled by anyone. He leveled harsh criticism at the United States’ claim that it has the right to use force wherever it may be without the approval of the UN Security Council. In the case of Syria, Lavrov even asked US Secretary of State John Kerry why the United Stats did not seek authorization from the UN Security Council, to which — in Lavrov’s words — Kerry replied: “If we do, we will somehow validate the status of the regime of Bashar al-Assad.”

Lavrov noted that, when it was needed, the United States cooperated perfectly well with the Syrian regime in destroying the stockpiles of chemical weapons, whereas now it does not want to treat the regime as a partner in the fight against terrorism. With regard to the well-known argument against cooperation with the regime, that it attracts terrorists to Syria “like a magnet,” Lavrov said that it was a “totally perverse logic,” because the Americans were talking to the Taliban, for example. In this regard, Lavrov even wondered whether in Syria the Americans “are actually conducting an operation against IS, or rather an operation to overthrow the regime.”

Another significant feature in the minister’s appearance was his reflections on the issue of the Arab-Israeli conflict, which he emphasized in unusually strong terms. If one wants to highlight the main elements in this part of Lavrov’s speech, it is possible to note, first of all, his call for a speedy resolution of the Palestinian issue through the creation of a Palestinian state alongside the Jewish one. As he put it, “one cannot keep the Palestinian issue permanently frozen.” The minister even chided US diplomacy, which first took nine months to promote a settlement, then extended this timeline, but then engaged with Iran, “leaving aside” Palestine. Second, the lack of resolution to the Palestinian problem was linked to the rise of extremism. Specifically, the minister said that a settlement not having been reached “for almost 70 years is one of the major arguments for those who recruit extremists into their ranks.” In this context, one may recall how strongly Israeli politicians reacted when Kerry made a similar argument, despite the United States having for years considered Israel’s security as a major foreign policy priority.

Is Lavrov running the risk of causing an equally negative reaction? Of course, Russia cannot be compared to the United States, for which everything that is connected to Israel is a matter of domestic — rather than foreign — policy. Moscow, however, maintains very good relations with Israel, which is home to over a million former Russian and CIS citizens. Likewise, some foreign policy steps in Moscow are implemented by taking into account Israel’s interests. Thus, Iranian and Syrian analysts often criticize Moscow for refusing — in spite of its promises — to supply Tehran and Damascus with S-300 missile systems due to the strong opposition of Israeli leaders.

Will Russia still be ready to cooperate with the United States and its allies in the fight against Islamist terrorism? I am confident it will. At the same time, however, the old Chinese saying springs to mind: “Who can remove the tiger from the room? Only the one who put it there.”