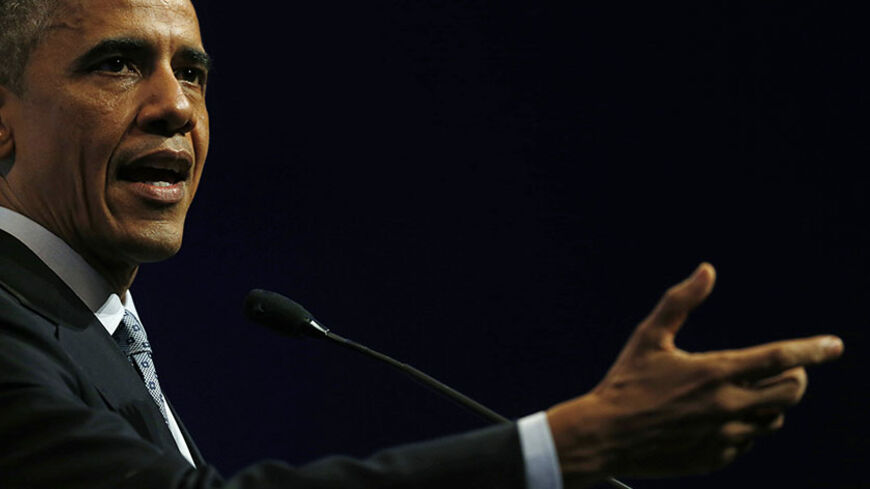 US President Barack Obama speaks at a news conference at the end of the G-20 Leaders Summit in Brisbane, Nov. 16, 2014. - REUTERS/Jason Reed

On the role of Assad in the battle with IS and in a political transition in Syria, Obama said “there’s no expectation that we are going to in some ways enter an alliance with Assad. He is not credible in that country. Now, we are looking for a political solution eventually within Syria that is inclusive of all the groups who live there — the Alawite, the Sunni, Christians. And at some point, the people of Syria and the various players involved, as well as the regional players — Turkey, Iran, Assad’s patrons like Russia — are going to have to engage in a political conversation. And it’s the nature of diplomacy in any time, certainly in this situation, where you end up having diplomatic conversations potentially with people that you don’t like and regimes that you don’t like. But we’re not even close to being at that stage yet.”

Asked pointedly if he was actively discussing ways to remove Assad in the context of plans for a political transition in Syria, Obama responded with a simple “No.”

Obama’s clarity on Syria stood in contrast to an unusual presentation by US Secretary of State John Kerry the next day on how the Islamic State and the government of Syria are actually “co-dependent” or “symbiotic,” that is, they need each other as enemies, and the US must build and back a “moderate center” in Syria.

Kerry’s remarks come as Syrian military forces this month retook the area around the Al-Shaer gas field from the IS terrorist group after fierce fighting, as reported by Khaled Atallah.

Arguments implying, even faintly, some type of link between Assad and IS, should be treated with care and caution. Otherwise we might be reminded of the case made by the George W. Bush administration about the alleged ties between Saddam Hussein’s government and al-Qaeda, which was also built on sketchy evidence, strained logic and innuendo. A report by the US Senate Permanent Select Committee on Intelligence disproved the allegations of any formal ties between Saddam’s regime and al-Qaeda.

Obama’s clear-eyed approach should for now settle the debate on US Syria policy. His reference to the role of Iran in a Syrian political transition merits emphasis, especially with the Nov. 24 deadline for the P5+1 nuclear talks approaching.

This column wrote last week that “Iran is not necessarily immovable on Assad’s survival. Iran’s four-point plan for Syria includes a decentralization of power away from the Syrian presidency. Iranian officials privately signal that Assad may not be untouchable, under the right conditions, but such conversations — if they are to bear fruit — can only occur with Iran in a spirit of collaboration, not confrontation. Otherwise, Iran will simply hunker down, and the war will go on.”

The relentless fighting between Syrian government and opposition forces have left Aleppans with little hope that a solution lies in further armed struggle.

Edward Dark writes from Aleppo that a conflict freeze, as proposed by UN Special envoy to Syria Stefan de Mistura, is increasingly seen as a necessary step:

“Although opinion in the city is divided over the ambiguous "freeze" proposal, there is overwhelming support for a respite — brief or permanent — from the real hardships and dangers of war. To put it all into context, Aleppo is a city under constant bombardment from both warring camps. It suffers from chronic shortages of basic needs, collapsed infrastructure and a breakdown of general law and order. Those problems are especially pronounced in the rebel-held east.”

Syrian opposition forces contend that recent gains in the south of the country are showing the West that effective moderate rebel forces can hold their own, or more, with support.

Mustafa al-Haj reports from Damascus, “The southern front is the most dangerous for Damascus. Through all the battles to the south of the capital and to the east toward Ghouta, the regime aims to protect Damascus as its center of power and to confirm its continued control of the Syrian central state. Without Damascus, the regime is little more than another armed faction on the ground in terms of power and influence. Therefore, rebel control of the southern region may be a way to pressure the Syrian regime, which is currently preoccupied with scoring military victories in the north and in eastern Ghouta.”

Akiva Eldar writes that the murders of four worshippers at the Bnei Torah Kehillat Yaakov synagogue on Nov. 18 are an ominous sign for the further radicalization of the Israeli-Palestinian conflict: “The events of recent days in Jerusalem prove that the mixture of tribal rivalry and political interests, which has filled the diplomatic vacuum to the brim and permeated all corners of the two societies, has been augmented by a mixture of religious passions blended with messianic nationalism.”

The massacre at the Bnei Torah Kehillat Yaakov synagogue, which was praised by Hamas and Islamic Jihad, came one day after a Palestinian bus driver was found hanged in his vehicle in Jerusalem. Although both Israeli and Palestinian coroners agreed that the death was a clear-cut case of suicide, according to Haaretz, the incident nonetheless sparked rumors in the Palestinian media that the death was caused by Jewish assailants.

The escalation around Jerusalem has sparked fears of a religious war, a third intifada, or splitting Jerusalem, as reported for Al-Monitor this week by Eldar, Ahmed Melhem, Daoud Kuttab and Mazal Mualem.

It has also caused Israel to reassess its dealing with Palestinian president Mahmoud Abbas. Ben Caspit writes that Israel’s right wing, including Prime Minister Benjamin Netanyahu, blame Abbas for incitement and the recent escalation of violence in Jerusalem. The center-left has risen to Abbas’ defense, citing essential cooperation between Palestinian security organizations and Shin Bet. Caspit concludes that “An in-depth examination yields a strange fact: Technically, both sides are right. The heads of the Israeli security organizations who describe the wonders of Abbas in all that concerns thwarting terrorist attacks are accurate. But the Israeli politicians who describe the wild and false incitement directed by the Palestinian Authority against Israelis and Jews also do not miss the mark.”

Meanwhile, Abbas must also contend with a crisis in his agreement with Hamas over the dismal conditions in Gaza. Hamas parliamentarians threatened, and then postponed, a no-confidence vote this week, as Adnan Abu Amer reports.

Caspit quotes a senior member of the Knesset Foreign Affairs and Defense Committee as saying “If we will continue to kick Mahmoud Abbas in this way, very soon we’ll find that we miss him.”

The announcement by the Egyptian jihadist group Ansar Bayt al Maqdis, now known as Sinai Wilaya, that it had pledged loyalty to IS was alternately interpreted as a sign of the group’s weakness and a challenge to the reputation of Egypt’s security services.

A founder of Gamaa Islamiya, an Egyptian Islamist organization that nonviolently campaigns for a religious state, told Rami Galal, “'The pledge of allegiance made by Ansar Bayt al-Maqdis to IS at this time is a rescue call from Ansar Bayt al-Maqdis to IS in light of the full blockade against the group in Sinai at all levels following the attack on Karam al-Kawadis [military base].'”

However, an Al-Monitor correspondent in the Sinai sees the announcement by Sinai Wilaya as a sign of an escalating crisis in the Sinai problem that will bedevil President Abdel Fattah al-Sisi’s claims to greater security in the country.

Partly because of the dangerous security situation in the Sinai, Sultan Sooud al Qassemi writes that the time is now for Egypt and Qatar to mend ties: “That political reconciliation to which Amr Moussa alluded may be necessary to deal with the challenges that Egypt faces from fighting terrorism to alleviating poverty.”