Could Israel’s policies pave way for an intifada?

Israel’s systematic marginalization of Palestinian residents in Jerusalem and its separation of them from the Palestinian Authority are recreating the ingredients for an uprising. 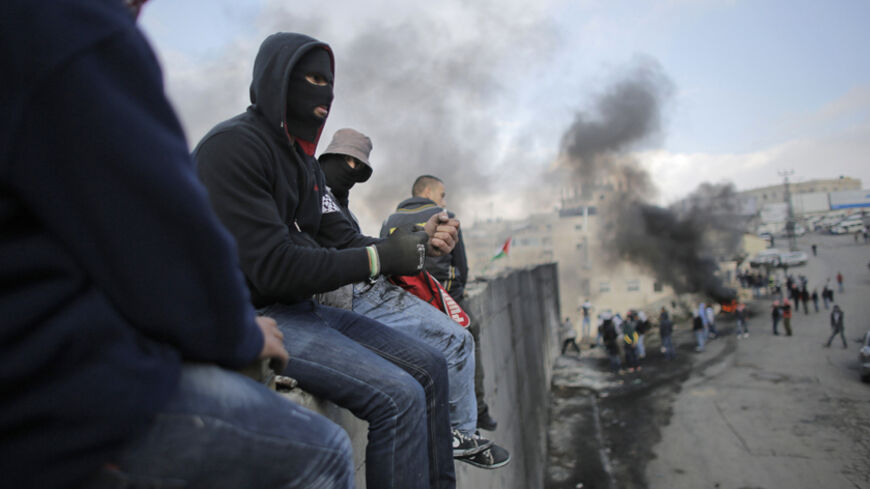 In the early months of the first intifada, Palestinians waited for the underground leadership's directions, which came out in a numbered statement that was quickly distributed by fax throughout the occupied territories. The leaflet, Bayan al-intifada, came to be regularly issued by what was known as the Unified National Command of the Intifada. This underground leadership was a well-kept secret, and for Israel, its members were like needles in a haystack.

In 1987, I was asked about it in an interview with Israel TV about the leadership. I answered half-jokingly that it could be meeting anywhere, including in West Jerusalem or even in a Tel Aviv cafe. I am told that this made Israelis go berserk, not knowing which of the Palestinians they saw at their cafes were part of the underground leadership and which were simply out for a cup of coffee.

At the time of the first intifada, there was no wall and no restriction on the movement of Palestinians from the occupied territories into Israel.

In Nov. 13 meeting of journalists who worked at the now defunct Palestinian newspaper Al Fajr, Hatem Abdel Qader, one of the paper’s editors who later became a member of the Palestinian Parliament and a minister for Jerusalem affairs, revealed that the underground leadership often met on the premises of the newspaper’s Nablus Road offices in East Jerusalem. An editor in attendance indicated that the third leaflet had been produced at the newspaper premises. A Palestinian engineer from Ramallah, Khaled Batrawi, posted on his Facebook page this week that he had been aware of a number of meetings of the underground leadership held in West Jerusalem.

At the time, membership in — or even sympathy for — the PLO was illegal, so it was necessary to direct it in secret. This need, coupled with Palestinians' freedom of movement, created the formula for the creation of the underground leadership.

A similar situation is unfolding now in Jerusalem. The Israelis are denying the Palestinians any chance to organize legally and to connect with leaders in the occupied areas, but they are generally free to move about in Jerusalem and throughout Israel.

The continued repression is now pushing Palestinians in Jerusalem to create local committees for defense against vigilante attacks by settlers or other Israelis. In Beit Safafa, Al-Monitor has learned that local families have been meeting and planning how to protect themselves from potential revenge attacks by Israelis. Beit Hanina resident Khalil Assali told Al-Monitor that families in his neighborhood were worried about possible future curfews and were stocking up just in case.

Shortly after the 1967 war, Israel announced the unilateral annexation of East Jerusalem and imposed Israeli law on the city and its residents. While Jerusalemites have been technically under civilian and not military law since then, the lot of Palestinians in Jerusalem began to spiral downward with the signing of the Oslo Accord and the establishment of the Palestinian Authority in Ramallah.

Israel’s unilateral annexation of Jerusalem included a discriminatory policy that kept the Palestinian population of the city as marginalized as possible. Israel has a policy of negating Palestinian residency rights, limiting their ability to build and containing the built-up areas to ghetto-like neighborhoods where unemployment and poverty are high.

The Association of Civil Rights in Israel calls the Israeli planning and building policy in Jerusalem discriminatory, with Palestinians allowed to build on a mere 17% of their land. Those who dare build without permits are forced to choose between destroying their homes themselves or watching Israel do it and charge them for the demolition costs. At least 14,000 Palestinians from Jerusalem have lost their residency rights in the city since 1967 due to the policies that quietly transfer the city’s Arab population and make the so-called unified Jerusalem more Jewish.

Israel, which has refused to allow the PA any role in Jerusalem, despite commitments to the US government to respect existing national institutions, also closed the Orient House and the Chamber of Commerce among other representative bodies. Since then, the status of East Jerusalem has slowly come to reflect the status of the occupied territories before the 1987 intifada. No visible and legitimate local leadership, no contact with the natural leadership and physical isolation are the ingredients for an explosion.

It is clear that some tough issues will have to be addressed regarding the future of the city and its Palestinian residents. Will East Jerusalem continue to be isolated, or will it be allowed to reconnect with its natural community and leaders throughout the occupied territories? Short of the fall of the political and physical walls between East Jerusalem and Ramallah, Palestinians in the city are bound to create their own underground leadership that will naturally be secretive and radical. Such circumstances will most certainly recreate the conditions of the first intifada and could provoke further harsh Israeli repression, which will surely end in a physical and visible redivision of the city.