Israel is still not abiding by the terms of the cease-fire deal that ended the Gaza war in August, and still harasses and fires at Palestinian farmers and fishermen. 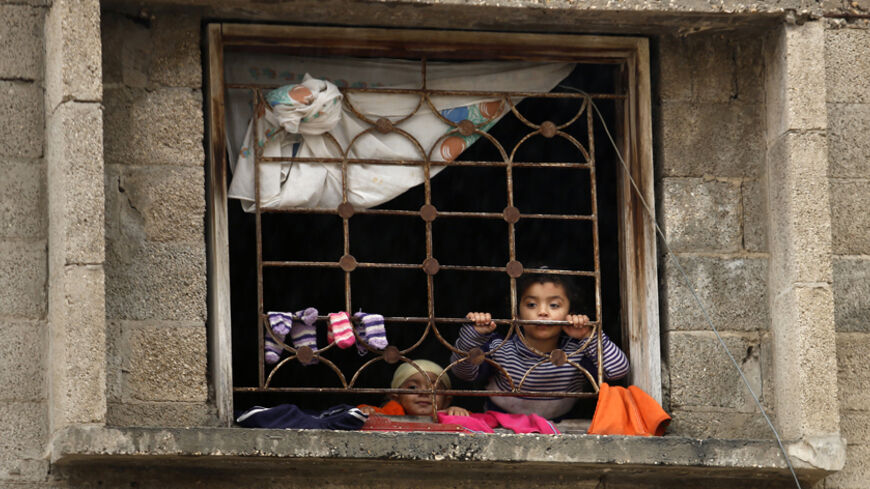 Children look out their window as they watch the funeral of Fadel Halawa, a Palestinian man whom medics said was shot dead by Israeli forces, in Gaza City, Nov. 23, 2014. - REUTERS/Suhaib Salem

BEIT LAHIYA, Gaza Strip — Ibrahim al-Muslimi, a 60-year-old farmer, is repeatedly exposed to gunfire in his farmland in the northern Gaza Strip, less than a kilometer from the Israeli border.

Muslimi, who owns more than 40 dunams (10 acres) planted with vegetables and fruits, told Al-Monitor that farmers in the entire agricultural area adjacent to the border see gunfire on an almost daily basis.

“Ever since the end of the Israeli war and the signing of the truce agreement, we have not felt any kind of security in our territory,” Muslimi said. “Whenever we are there, we feel like we are waiting for death and that we will be exposed to a bullet or an Israeli shell at any moment. Israel is shooting us for the sake of scaring us, driving us to leave our territory and emptying border areas of any Palestinian.”

Israel closed its border crossings with Gaza on Nov. 24 to prevent the export of vegetables from the Gaza Strip to the West Bank and some Arab countries, in clear violation of the truce agreement signed between the Palestinian factions and Israel under the auspices of Egypt. One of the most important points of the truce was the opening of the crossings and providing guarantees to lift the siege on Gaza.

The general manager of marketing and crossings at Gaza’s Ministry of Agriculture, Tahseen al-Sakka, told Al-Monitor that the Israeli occupation is not doing what it agreed to with respect to opening the crossings for export. Israel abided by the agreement for a total of three weeks.

Sakka said, “Since the start of the export through Israeli crossings until the beginning of the ban, we exported around 250 tons of various vegetables, but we were surprised [Nov. 17] when Israel prevented farmers from exporting their vegetables and denied dozens of trucks that were supposed to go to the West Bank and a number of Arab countries, under the pretext that they were unsafe and noncompliant with the specifications, which led to heavy losses for farmers.”

Israel is also preventing Palestinian fishermen off the coast of Gaza from accessing the agreed-upon area of six nautical miles in the truce agreement. It either shoots them or destroys their boats and arrests them out at sea.

Rashad Farhat, a fisherman from the town of Rafah, complained about the frequency of the Israeli navy attacks within the small zone, which is still well within the 20 nautical miles agreed to in the 1993 Oslo Accord. Farhat accused Israel of violating their rights.

Farhat told Al-Monitor, “None of the fishermen have crossed the six miles, but the Israeli warship known as the Corvette always haunts us and shoots us to scare us and make us retreat to distances close to the beach. Many of the boat-destruction operations occurred during the past two or three months, while many fishermen were arrested and a number of boats were confiscated and towed to the port of Ashdod.”

Farhat said that the agreement to allow them six nautical miles was only talk, because Israel continues to restrict the fishermen to a distance of three or four at most.

Harassment of farmers and fishermen forms just a part of Israel’s continued violations of the cease-fire deal that ended the Gaza war. On the morning of Nov. 23, Israel killed a Palestinian hunter near the border with Israel, east of the city of Jabaliya in northern Gaza. In the evening of that day, Israel seriously injured a child in the village of al-Shawka, southeast of Rafah, according to a statement Al-Monitor secured from the Palestinian Center for Human Rights.

A spokesman for the Interior Ministry in Gaza, Iyad al-Bozom, said that Israel has routinely violated the Palestinian-Israeli truce agreement since it was signed on Aug. 26. In October alone, there were more than 15 cases of Israeli shootings, mostly against fishermen, in addition to three injuries and five cases of arrests at sea, Bozom said.

“According to the agreement, the blockade would be lifted, the crossings would be opened and reconstruction materials would be allowed to enter in exchange for a cease-fire between the Palestinians and the Israelis. Unfortunately, however, since the first day of the signing of the agreement, the occupation has not abided by its terms and until this very moment, the agreed upon reconstruction materials failed to enter,” he said.

“The occupation made several breaches by frequently attacking fishermen and trying to consolidate a specific area for fishing as a fait accompli,” Bozom said. “The shooting operations also sometimes affect border areas and farmers.”

Bozom warned that in light of Israel’s violations and its noncompliance with the terms of agreement, the conditions are ripe for an explosion.

The latest Israeli violations of the new truce agreement and Israel’s attempt to evade many of its provisions seem to be quickly paving the way for the termination of the cease-fire deal and setting the stage for war instead.