The US president’s $5.6 billion emergency war-fighting request includes a plan to shore up the Syrian opposition. 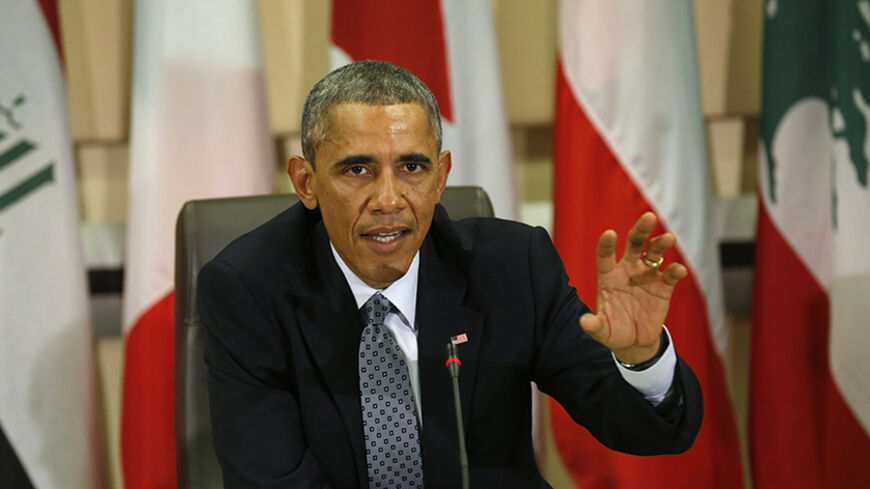 US President Barack Obama speaks at a meeting with more than 20 foreign defense chiefs to discuss the coalition efforts in the ongoing campaign against the Islamic State at Joint Base Andrews in Washington, Oct. 14, 2014. - REUTERS/Kevin Lamarque

President Barack Obama is asking Congress for an extra $165 million to boost the Syrian opposition as part of his $5.6 billion request to fight the Islamic State (IS), a tacit acknowledgment that the group can’t be defeated in Iraq alone.

The request is included in a 34-page letter from the Office of Management and Budget that was sent to House Speaker John Boehner, R-Ohio, on Nov. 10. Congress returns from its election day recess on Nov. 12 and administration officials are urging a quick vote so they can start deploying an extra 1,500 troops to help the Iraqi army battle IS.

The request includes $100 million in Economic Support Fund spending to support “Syrian stabilization strategies” and allow the State Department to “expand its engagement with the moderate Syrian opposition” and “help develop the capacity, cohesion, and credibility of the opposition.” It would also increase the Peacekeeping Operations budget by $65 million for “programs to bolster the capacity of the moderate Syrian opposition to counter [IS] and other extremist groups.”

“The Department of State will expand its engagement with the moderate Syrian opposition,” the OMB letter states, “to help develop their capacity to provide local security in areas previously under IS control and foster the conditions that lead to a political settlement.”

The request comes amid mixed messages about the administration’s strategy for dealing with IS in Syria.

Secretary of Defense Chuck Hagel reportedly criticized the lack of focus on Syria in a recent memo to national security adviser Susan Rice, according to The New York Times and CNN. And lawmakers in September raised concerns that the president’s plan to train and equip 5,000 Syrian rebels to fight IS was poorly thought out even as they approved the request.

Obama himself told visiting military leaders last month that defeating IS would "require us developing and strengthening a moderate opposition inside of Syria that is in a position then to bring about the kind of legitimacy and sound governance for all people inside of Syria” — a statement warmly welcomed by regime change advocates. At a press conference last week, however, the president repeatedly called Iraq America’s “number one” focus.

The Nov. 10 request contains several other noteworthy elements, including: