IRGC commander says US not reliable

Some Iranian conservatives feel that Iran has not received fair terms under the nuclear extensions. 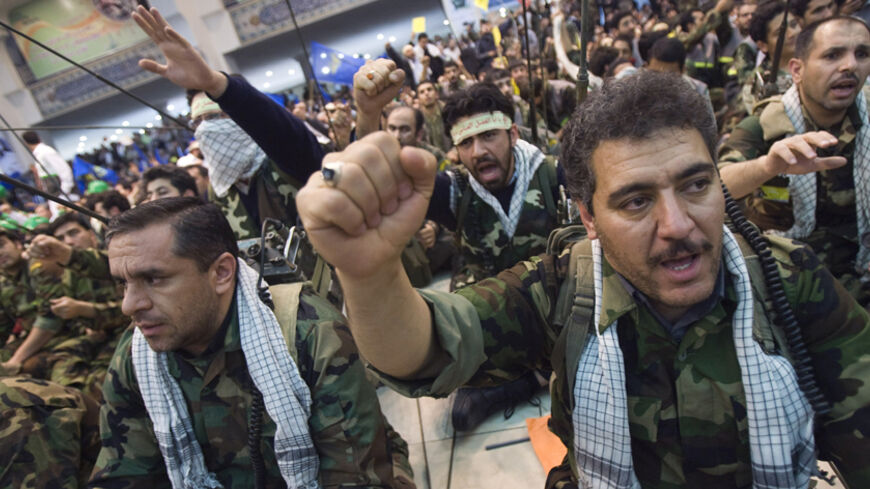 After the Nov. 24 announcement of a seven-month extension on the nuclear talks, some Iran conservatives are pointing fingers at the United States, and one Iranian news site is even criticizing the Supreme Leader’s foreign policy adviser.

At a speech today, Nov. 26, commemorating Basij Week and the Iran-Iraq war, Mohammad Ali Jaffari, commander of Iran’s Revolutionary Guard Corps, said that the Basij Organization was formed to “resist against American conspiracies,” adding, “The people know that the economic and political pressure and military threats are because … the people will not submit to American force.”

One of the main goals of the nuclear negotiations is to determine the quantity, method and timeframe for the removal of UN Security Council and US sanctions on Iran in return for a reduced nuclear program. However, not all political factions in Iran feel that concessions on their nuclear program are the best way to address Iran’s economic woes and have advocated focusing on domestic production rather than international markets.

Hard-line Raja News, upset over the second extension, criticized Supreme Leader Ayatollah Ali Khamenei’s foreign policy adviser Ali Akbar Velayati for his comments in the 2013 presidential debates. During those debates, Velayati criticized former nuclear negotiator Saeed Jalili’s record in the negotiations, suggesting that he was not engaged in dialogue with the opposing side. He also said that had Iran agreed to suspend enrichment to 20% and slow down operations at the Fordow facility, three different sanctions would have been removed.

The criticism of Jalili was a watershed moment, given Velayati’s position and closeness to the supreme leader, and one of the first clear signs that Iran’s top leadership was divided over how to approach the nuclear negotiations.

Raja’s headline read, “How have Velayati’s theories in the debates regarding the negotiations become void?” The article quoted Velayati from the presidential debates, when he said to Jalili, “When the opposing side wants to take a hundred steps and for you to take three steps, it’s clear you don’t want there to be progress. Negotiations are not reading statements from behind the table. If it were not like this, our situation would not be the way it is.”

The piece questioned whether the time has come to assess Velayati’s “historic claims … about the principles of negotiations,” and worried that Iran had given up “all of its winning cards” under the terms of the extensions and interim agreements and suspended 20% enrichment while sanctions by the United States and Europe continue.

The Raja article concluded that instead of analyzing “the method of the negotiations,” one has to see that “The prime reason for pressure on the people [is] the maliciousness of the West and America.”