The Islamic State aimed to create a Shiite-Sunni conflict to impose its control, but Iraqi Sunnis have instead turned to help from Shiites to get rid of the extremist group. 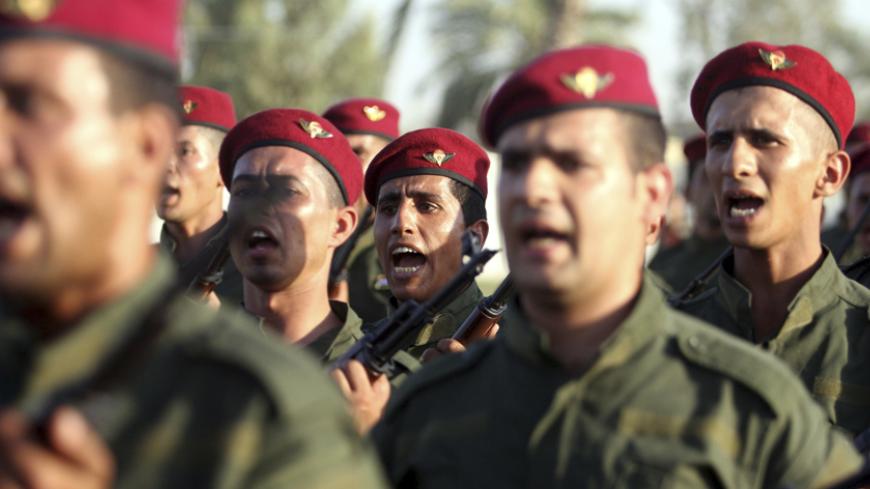 Shiite volunteers who joined the Iraqi army's Abbas Unit to fight militants of the Islamic State parade down a street in Karbala, southwest of Baghdad, Aug. 14, 2014. - REUTERS/Mushtaq Muhammed

The Islamic State (IS) mainly relies on the sectarian conflict to create a favorable ground for its so-called caliphate. Unlike its al-Qaeda counterpart, IS has adopted a sectarian agenda as a permanent and fundamental strategy. The instigation of a Sunni-Shiite conflict has been the group’s ongoing key tool and policy since its inception under Abu Musab Zarqawi’s era.

This has been one of the main differences between the two groups, since the beginning of their operations in Iraq after the US invasion in 2003. Zarqawi addressed the Sunni-Shiite conflict in his message to Osama bin Laden in 2004. The former considered fighting Shiites an undeniable priority of jihad, in such a way that fighting the Americans should not hinder or stop the fighting of Shiites.

This is while the talks between both sides showed that al-Qaeda and Zarqawi’s group differed in terms of targeting Shiites, as al-Qaeda leaders did not mind allying with Shiite parties that oppose the US occupation.

The follow-up on the groups’ activities shows that al-Qaeda avoids clashing with the local communities, whereas IS seeks to cleanse an area from non-Sunnis, particularly Shiites, as soon as it invades. IS uses a variety of ways to stir up sectarian conflict and prompt Sunnis to join its ranks.

IS has largely expanded its activities and suicide bombings in the Shiite areas of Baghdad since the fall of Mosul, in addition to the major bombings in the Shiite-majority cities of Karbala and Kadhimiya. The group had hoped that this would result in violent reactions by the Shiite militias in Sunni areas in Baghdad, and end with Baghdad’s Sunnis joining its ranks and helping it exert its control over the capital.

This did not happen. Sunni areas in the Iraqi capital have enjoyed a relative calm in the absence of significant violations. The Sunnis in Baghdad enjoy a civil background that keeps them completely away from the group’s radical religious policies.

Speaking to Al-Monitor, a prominent cleric in the Sunni-dominated city of Adhamiya in Baghdad said that Baghdad’s Sunnis have a civil culture and moderate religion that is far from radicalism, and therefore Baghdad’s Sunnis had no significant presence in extremist groups in the years following 2003. Many of them maintain good family and work relationships with Shiites.

The cleric said, “Despite its dissatisfaction at the unfriendly behavior of some radical groups affiliated with the Shiites, the Sunni component in Baghdad prefers peaceful coexistence and hard work to resolve problems. The mass destruction, fragmentation of the population and displacement of thousands of people in Mosul are a lesson for us to stay completely away from this extremist group that has tried to exploit the Sunnis to advance its brutal and terrorist agenda.”

The Shiite authorities have assumed a prominent role in calming the situation and preventing their followers from having violent reactions that may have dire consequences. Iraq's prominent Shiite cleric, Grand Ayatollah Ali al-Sistani, along with his spokesmen, has repeatedly said, “Sunnis are ourselves, not only our brothers.” Grand Ayatollah Sayyid Hussein Ismail al-Sadr regularly receives Sunni tribesmen and clerics from different parts of Iraq, an important step in the prevention of sectarian conflict between Sunnis and Shiites.

IS did not only target Shiites to drag them into attacking Sunnis, but also suppressed moderate Sunnis to rid the internal front from moderate perspectives and from those who coexist with Shiites. The group deals severely with Sunni tribes that preserve or seek to preserve good ties with Shiites. The Oct. 20 execution of several members of the Bou Nemr tribe in Anbar province is a prominent example. The group has killed 238 men from the tribe and a mass grave of 250 tribesmen was recently found.

These actions have resulted in adverse reactions that were not the group’s objective. The Sunnis sought help from the Shiites to get rid of the group. In an interview with Al-Hurra on Oct. 29, Bou Nemr leader and parliament member Ghazi al-Gaood called on Shiite leaders, particularly Muqtada al-Sadr and the head of the Badr Organization, Hadi Al-Amiri, to oppose the destruction of his tribe by this group. He said they were facing a genocide at the hands of a barbaric group that had no religious, moral or humane principles, and therefore they welcomed any force that could assist them, even if this meant resorting to help from Israel.

These positions provide the Iraqi government with possibilities to be exploited in its war against IS and to restore the territory inhabited by a Sunni majority angry at the group’s radical actions.