Since its establishment, the Iraqi army has been directed inward, playing a domestic role rather than protecting the country from foreign forces. 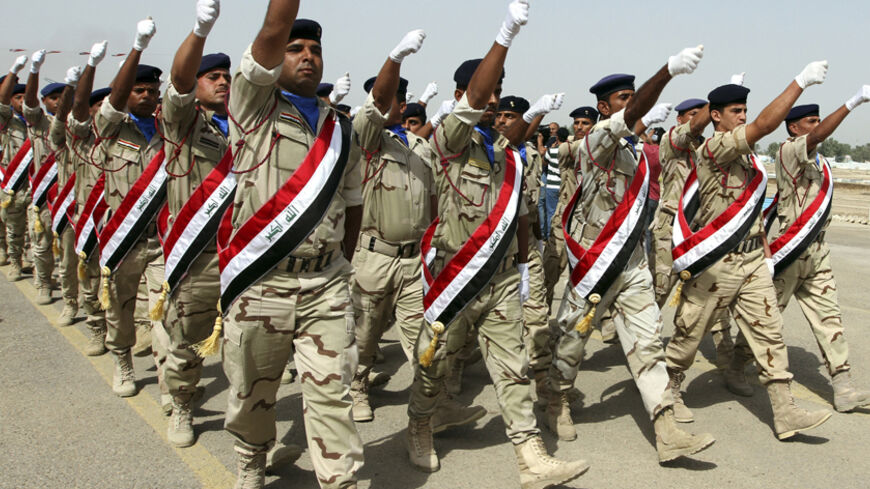 The Iraqi army's defeat by Islamic State (IS) fighters in Mosul in June came as a surprise. Although the Iraqi military is superior in terms of numbers of soldiers and arms, its fighters quickly deserted their posts. The army is still unable to undertake serious operations to retake control of the cities that have fallen under IS control despite ongoing US-led air cover. The reality of the Iraqi army since its inception is that it has never won a battle against another armed force. In fact, it has exhibited power only when cracking down on popular protests.

The Iraqi army has suffered over the years from two major flaws: it was not designed to defend the country, but rather the governing authorities, and it has always been plagued by sectarianism. The concept upon which the Iraqi army was created by the British, whose forces entered Iraq in 1921, was strongly influenced by its timing. During that period, the British were having to confront persistent protests by Iraqis. After the eruption of the 1920 revolt, British forces proposed establishing an army to deal with such rebellions. Three years later, in 1924, the newly established Iraqi army headed north to Sulaimaniyah to suppress the Kurdish movement.

In 1933, the army went to the Mosul region, where it committed the Simele massacre, killing people in 63 Christian villages. In 1963, it clamped down on Rumaitha. The military's history of suppressing the Iraqi people culminated under Saddam Hussein and included brutal attacks against Kurds in the north and Shiites in the south in the 1980s and 1990s.

Because the Iraqi army has always focused inward — as its primary purpose was to preserve internal security, disperse demonstrations, confront political protests and rebellions and protect the government — it has been influenced by the country's political ideologies and used in numerous coups at the whim of military commanders. Among them are the coups by Bakr Sidqi (1936), Rashid Ali al-Gaylani (1941) and Abd al-Karim Qasim (establishing the republican system, 1958). Others include the Baathist takeover (February 1963), followed by the coup led by Abdul Salam Arif overthrowing the Baathists (November 1963) and the coups that returned the Baathists to power (July 18, 1968) and allowed the party to tighten its grip on the country (July 30, 1968). In addition, there have been dozens of other small or failed coups.

From its creation in 1921 until the fall of Hussein's regime in 2003, the Iraqi national army had in reality been a Sunni army. At its establishment, the Shiites, who periodically rose up against British rule, boycotted it. An attempt was made to try to win over the Shiites by forming the Musa al-Kadhim regiment, named after the Shiite's seventh imam. It was to no avail. When Hussein took power, he banned all non-Sunnis from holding high ranks.

This year in the Sunni city of Mosul, there were more than 7,000 former officers and 100,000 former soldiers who had been forced from the military by de-Baathification, according to the BBC. Moreover, reports by CNN claim that thousands of members of IS had been army defectors.

Until 1980, the army had been involved in only two external wars: the 1948 Arab-Israeli War and the October 1973 Arab-Israeli War. In both cases, there is no evidence of effective participation by the Iraqi military. The army failed to bring the Iraq-Iran War (1980-88), which Hussein initiated, to a decisively conclusion. Instead, it ended with an Iranian decision to conclude it with an international resolution.

Compared to the role the Iraqi military has played in the past, it seems that today's army is a less experienced and less disciplined version of those of the past. For the past 15 years, the army has played the role of police in protecting Iraq domestically. As for its sectarian composition, the Sunnis boycotted it during its reformation after the 2003 US-led invasion, and thus it has become dominated by Shiites.

Under Prime Minister Nouri al-Maliki, the army became a Shiite institution par excellence, as Maliki perceived events in Iraq as a continuation of the conflict between Shiites and Sunnis that began 1,000 years ago. Sectarianism in the current army is also clearly reflected in its widespread public practice of Shiite religious rituals and in the exaggerated violence and collective punishment employed against Sunni cities. According to reports from Anbar, the Iraqi army used barrel bombs during fighting there this year, sparking confrontations in the Iraqi parliament in August.

Today's Iraqi army is known for its lack of discipline. Its troops often demonstrate inappropriate behavior on the battlefield and in public places, showing little or no regard for military rules and regulations. It has had and continues to have adverse effects on the lives of Iraqis. Its reformation now necessitates addressing its flaws to build a true national army with the goal of defending the homeland, not only the authorities.