Official suppression of the history of Jews forced to leave Iraq in the mid-20th century ended with the toppling of Saddam Hussein and is now being explored in movies and news reports. 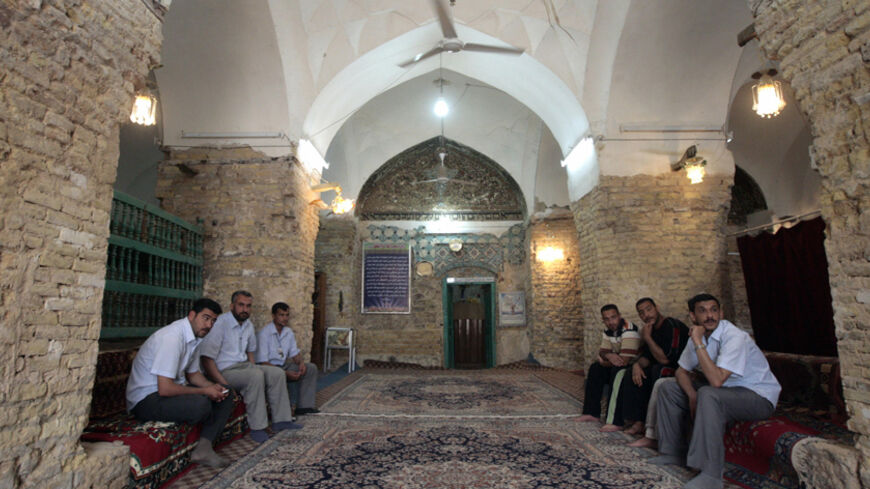 Muslim men sit at the entrance of a mosque housing the tombs of the four companions of the Jewish Prophet Ezekiel in the small town of Kifl, south of Baghdad, April 29, 2009. - AFP PHOTO/Ahmad Al-Rubaye

While under Baath Party rule, from 1968 to 2003, the Iraqi people were barred from examining the issue of Jews living in Iraq, their forced emigration and their influence on Iraqi life. Everything about the Jewish community's contribution to Iraqi society was suppressed. Since 2003, however, Iraqis have begun revisiting their fellow Jews and their imprint on society. They have also begun to expose the methods used to displace them.

Jews had lived in Iraq for more than 2,500 years, mostly in Baghdad, but also in Babil, Mosul and other cities. They were estimated on average to represent 2.6% of the total Iraqi population. In the 1940s and early 1950s, the Jews became victims of looting and killings, which eventually led to their displacement. The first attacks against Jews took place in 1941, under the Nazi-allied government of Prime Minister Rashid Ali al-Gaylani.

In his book “My Beloved Baghdad,” professor Shmuel Moreh references government statistics citing thousands of deaths among Jews and Iraqis at the time. The Iraqi writer and historian Kadhem Habib documented the statistics in a study titled “The February-May 1941 coup and Farhud against Jews.” He cites June 1941 government statistics estimating that 110 people were killed and 204 others injured. Habib also included estimates from observers, among them the leader of the Jews in Iraq, whom he quoted as saying, “The number of Jews who were killed is 179, while 2,118 were wounded. The number of houses that were looted during Farhud reached 1,000, while 2,500 shops were robbed. And 40,000 Jews suffered a little or a lot of losses.”

Anger toward Jews, who were viewed as pro-British and pro-Zionist, grew and attacks escalated in Baghdad through the partition of Palestine in 1948. The Iraqi government issued a resolution in 1950 declaring the need for the Jews of Iraq to relinquish their nationality and depart for Israel, leaving their possessions behind. The historian Rashid al-Khayoun claims that some Arab religious figures had a role in developing the plan for the Jews' forced displacement of some 150,000 Iraqis.

The 2014 film “Aswat al-Rahil” (Voices of Departure), produced by Alhurra-Iraq in Arabic and English, examines the role of Iraqi Jews in the development of the country’s music. In a Dec. 4 phone interview, Mohammad Hussein, the film's producer who works for Alhurra in Washington, spoke of the unexpected reactions by Iraqis after the first screening in Arabic on Alhurra TV. He sensed that Iraqis had been moved by the stories told and that they felt some sort of nostalgia for these people who had made a positive impact on Iraqi life.

TV productions since 2003 have revealed much about the lives and accomplishments of Jews in Iraq. “Salima Pasha” — a 30-episode 2012 series written by Fallah Shaker, directed by Bassem Kahhar and produced by the Al-Sharqiya channel — tells the story of the famous Iraqi Jewish singer Salima Mrad. The series touches on many aspects of Iraqi Jewish life and on how the Jews were forced to leave.

In a Radio Free Iraq report on May 25, 2011, residents from the Baghdad neighborhood called Torah Place, home to some of the city's Jewish residents, were described as being among some of Baghdad's finest families. A September 2012 Radio Free Iraq report revealed that a Jewish cemetery still exists in Baghdad and is looked after by a Muslim man, who also buries the members of the only Jewish family remaining in Baghdad.

Producer Hussein said that Iraqis are now remembering the impact of Iraqi Jews because information about them is no longer being suppressed. The previous ban had led to disparagement of Jews and ignoring what they had contributed to the country. When the ban was lifted, they could discuss the information they now had access to, including positive findings.

Hussein pointed out that one of the Jews' contributions to the country’s artistic life included giving songs their Iraqi national identity. Among the most prominent of the Jewish composers was Saleh al-Kuwaiti, popular in the 1930s. People across Iraq still sing his songs today.

It seems that Iraqi Jews are also expressing feelings of nostalgia these days. In October, the Al-Rasheed channel aired “​Iraq's Jews: Nostalgia for the Past,” featuring displaced Iraqis in Britain recalling their life before their exile and their desire to return to Iraq. A number of Iraqis have set up a Facebook page advocating the return of Jews to the country.

On April 20, 2009, Al-Zaman newspaper reported on an Iraqi Jewish woman who had been able to recover her home in Baghdad after winning a court case for the restoration of property confiscated when Jews were forced to emigrate.

It seems that the attention on Iraq's displaced Jews has encouraged others to address their history and solicit the views of Iraqis. Channels such as Al-Arabiya, Al Jazeera and others have reported on the issue, with these segments typically focusing on coexistence between Jews and Muslims in Iraq and the respect shown for the other’s beliefs. For example, the NFO channel spoke with Ezra Levy, 83, who still has a plaque inscribed with Quranic verses in addition to Jewish religious symbols in his home in Baghdad.

Jews have lived in Iraq since the Babylonian era. Like other Iraqis, they have clung to their Iraqi identity despite the great transformations the country has experienced. What happened in the 1950s was more than they could bear. Today, Christians in some areas of Iraq have faced similar displacement at the hands of the Islamic State, which has forced them from the cities and towns where their ancestors also lived.