As the Nov. 24 deadline to reach a nuclear deal nears the negotiating parties are engaged in marathon discussions. 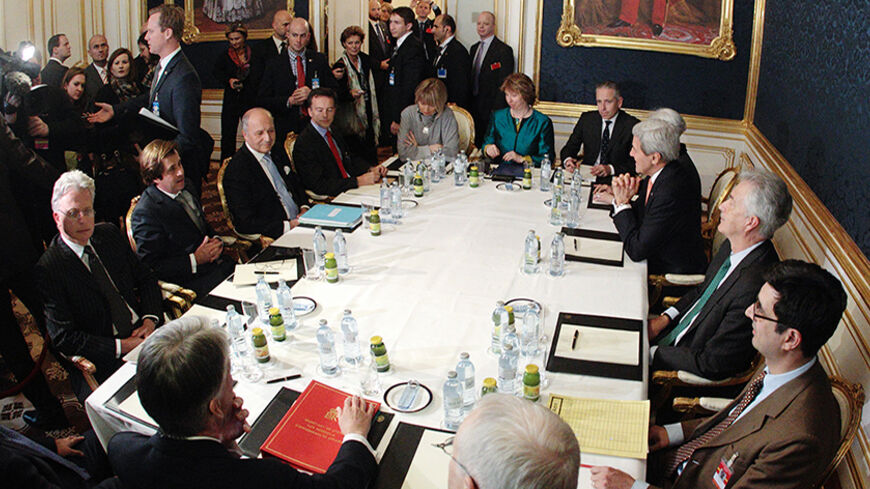 VIENNA — US Secretary of State John Kerry and Iranian Foreign Minister Mohammad Javad Zarif mostly stayed huddled in meetings behind closed doors at nuclear talks at a Vienna hotel on Nov. 21, with each canceling earlier announced plans to leave Vienna for further consultations.

Negotiators from both the United States and Iran have suggested in recent days that they would like to reach at least a framework agreement toward the comprehensive accord by the Nov. 24 deadline or shortly thereafter, rather than work on an extension of the current interim deal. But gaps on the issues of enrichment capacity, sanctions relief and the duration of a deal remained going into these latest high-stakes talks on the eve of the deadline.

“What we are all focused on now is trying to get the key principles of a deal agreed over the next 72 hours so that we can meet that important deadline,” British Foreign Secretary Philip Hammond told journalists as he arrived for talks in Vienna Nov. 21 with Kerry, Zarif, the European Union’s Catherine Ashton and French Foreign Minister Laurent Fabius.

“It is clear that both sides want to try to get a deal done, but none of us want to do a bad deal, and we are very clear that we have to get more flexibility from the Iranians,” Hammond said. “In return, we are prepared to show some flexibility on our side. But time is short. We are up against a deadline here and I think we are all working very hard to get the best possible deal on the table.”

“We’re driving toward what we believe is the outline of an agreement that we think we can have,” Kerry said in Paris Nov. 20.

Confusion and uncertainty prevailed here Nov. 21 over usually routine announcements about meetings amongst negotiators underway. The State Department first said on Nov. 21 that Kerry would travel to Paris in the evening after consultations in Vienna that same day with Zarif, Ashton, Hammond and Fabius, who arrived here Nov. 21. But late that day, the State Department said Kerry would stay overnight in Vienna after all to continue consultations with Zarif and Ashton. While Hammond came and left Nov. 21, Fabius stayed on, unannounced, late into that evening.

Similarly, Iranian media reported midday on Nov. 21 that Zarif would travel back to Iran later in the day, ostensibly to consult with more senior Iranian authorities about proposals being discussed in Vienna. But Iran officials shortly thereafter said the trip had been canceled, and Iranian media cited Zarif saying that while the discussions have been positive here, there was not a strong enough proposal from the six world powers for him to bring back to Iran yet. There have been “good discussions made in [the] last few days, but there's been no considerable offer that I may need to take it to Tehran,” Iran’s Tasnim News Agency cited Zarif.

An Iranian official, speaking not for attribution, told Al-Monitor on Nov. 21 that they had bought tickets for Zarif to travel to Iran that day but had canceled them. He said it could mean that the solutions being discussed are either not tempting enough to yet bring back to Iran, or, on the contrary, that they are good enough to keep discussing here and trying to improve. He suggested that if a deal does appear close, Zarif may still decide to make a quick trip to Iran.

The changed plans and conflicting reports on the negotiators’ schedules come amid an intensifying final push to close remaining gaps to reach a comprehensive Iran nuclear accord by a self-imposed Nov. 24 deadline. They seem to suggest both the sensitivity of the final stretch of the negotiations, as well as perhaps some strategic misdirection and leaks designed to pressure the other side and shape public opinion amid last-minute haggling likely to go down to the wire, if not beyond.

Meantime, Russia’s Foreign Minister Sergey Lavrov was expected to come to Vienna to join the talks on the eve of the deadline on Nov. 23, Russian journalists here said.