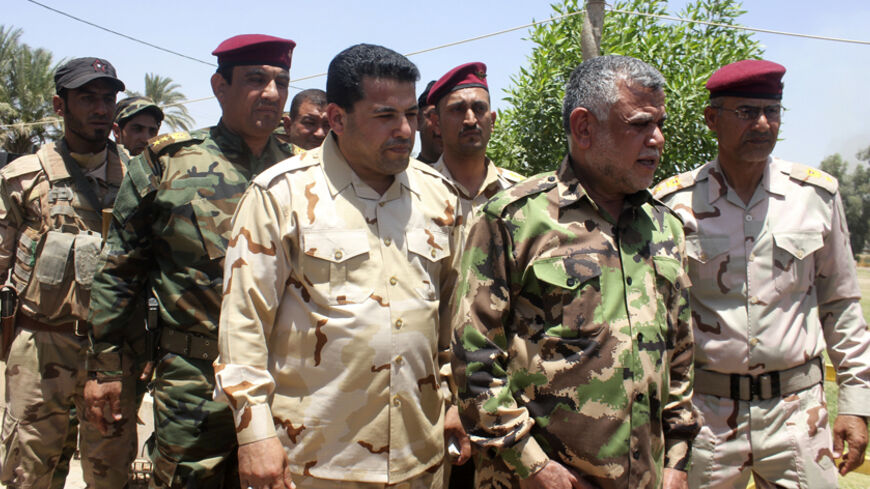 Since the collapse of the Iraqi military in Northern Iraq, allowing the Islamic State (IS) group to seize large swaths of territory in early June, the central government in Baghdad has relied in large part on various militias and volunteers to shore up its forces. One of these groups that has played a large role in liberating a number of towns from IS is the Badr Organization, headed by former Minister of Transportation Hadi al-Amiri.

Conservative website Mashregh News ran a profile of Amiri on Nov. 12. The glowing profile by Mashregh, which some believe has close connections to Iran's security agencies, can be viewed as endorsement. The brief synopsis, in addition to Amiri’s activities against former Iraqi dictator Saddam Hussein, also read that Amiri has both Iraqi and Iranian citizenship and that his wife is Iranian.

It should be no surprise, then, that Amiri has a close personal relationship with the Iranian Revolutionary Guard Corps' Quds Force commander Qassem Soleimani, who has been working closely with Iraqi forces in their fight against IS. The Mashregh profile shared a number of recent pictures of Amiri with Soleimani on the front line in Iraq.

In a Nov. 6 interview with Foreign Policy, Amiri called Soleimani a “friend, a good man, and good fighter.” One of the pictures shared by Mashregh shows the two men laughing, with Soleimani embracing Amiri. According to Mashregh, a number of these pictures were taken after the liberation of Amerli and Jurf al-Sakhar, two of the key victories by the Iraqi forces over IS militants.

The article also included an older picture of Amiri meeting personally with Iran’s Supreme Leader Ayatollah Ali Khamenei. One of the more recent pictures of Amiri in Tehran was taken during a Muharram ceremony with Ayatollah Khamenei, showing Amiri sitting next to Tehran Mayor Mohammad Bagher Ghalibaf. The picture was shared by a Twitter account associated with Iran’s supreme leader on Nov. 6.

Born in Diyala, Iraq, in 1954, Amiri eventually fled after he was issued a death sentence for his activities against the Iraqi government. He has lived in exile in Jordan, Syria and Iran. While in Iran, he commanded the Badr Brigades, which continued to fight Saddam. After the 2003 US invasion of Iraq and the toppling of Saddam, Amiri returned to Iraq and entered politics.

The Mashregh article does not cover how Amiri became transportation minister in 2010 or the role of Badr Brigades in the early days of Iraq’s civil war.

Mashregh reported that once IS took over parts of Iraq, rather than a “propaganda” campaign like that of the United States and its allies, some groups in Iraq “really” mobilized and fought against IS. On June 10, while he was transportation minister, with prime minister Nouri al-Maliki’s permission and Grand Ayatollah Ali Sistan’s fatwa, Amiri donned his military uniform once again and headed to Diyala province north of Baghdad to fight IS. According to Mashregh, Ameri defended Diyala with a force 4,000 strong.

While Amiri does not hold a position in the new administration of Prime Minister Haidar al-Abadi, his Badr Organization currently holds 22 seats in Iraq’s parliament. His party also controls the Interior Ministry. According to Mashregh, Amiri was a lead candidate for defense minister but was eventually sidelined due to the pressure the United States and Saudi Arabia applied on Iraqi Sunni groups to oppose the appointment.