The governor of the Central Bank of Iran is defending his performance just as political groups are fighting for authority over the governor position, while the bank needs greater independence to stabilize Iranian markets. 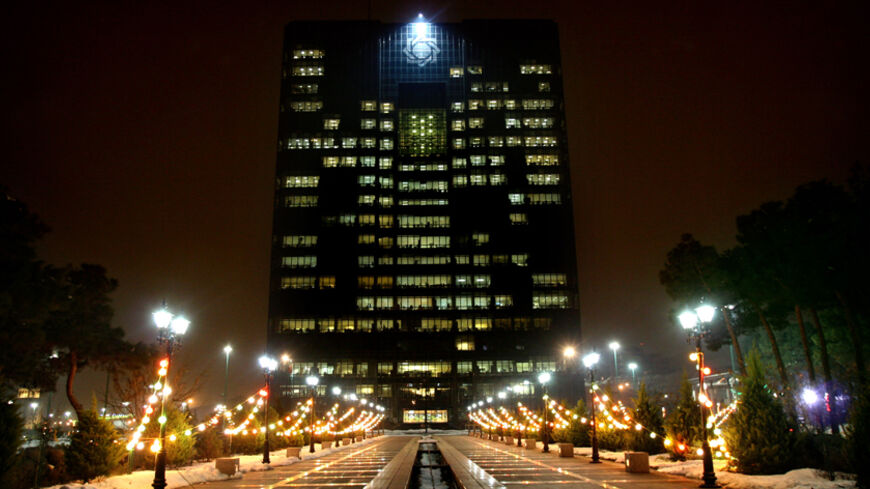 The Central Bank of Iran building is pictured in Tehran, Jan. 23, 2006. - REUTERS/Morteza Nikoubazl

In an open letter published Nov. 15, Valiollah Seif, the governor of the Central Bank of Iran (CBI), defended his organization's performance in the past year, elaborating in detail how he adopted a series of effective monetary policies to curb hyperinflation, direct liquidity into specific markets, regulate the volatile foreign currency market and help end the recession.

The letter, though not directly addressing any particular issue, comes just at the moment when political groups in Tehran are fighting for the legal authority to appoint and dismiss the CBI governor and improve the CBI’s standard of independence.

Seif's letter coincided with an approval by the Expediency Council — a body tasked with hashing out the differences between the parliament and the administration or the Guardian Council — which is responsible for ensuring that legislation agrees with Islamic law and the constitution — regarding the election and dismissal procedure of the CBI's governor.

Early in November, the council slightly modified the requirements for the appointment of a new governor, but its decision was widely criticized for failing to include serious steps to make the body truly independent form the administration.

The Expediency Council was tasked in 2011 with mediating talks between former President Mahmoud Ahmadinejad, who had dismissed two governors during his eight-year tenure when he found their monetary policies contradicted his administration's financial policies, and the conservative-oriented parliament, which had sought to make the governor accountable to the lawmakers.

Under the latest approval by the council, the president shall nominate a candidate for governor who must then be confirmed by at least two thirds of "all members of the Cabinet," which includes 18 ministers and 10 vice presidents, before being officially endorsed by the president. This was a revision of the council's earlier decision (announced two weeks before) after Supreme Leader Ayatollah Ali Khamenei urged the supervisory body to address the “plight” in a way such that, “The president, and not the minister of finance, could appoint and dismiss the governor of the Central Bank.” Khamenei wrote in a letter that “supervisory bodies” would also have to oversee the procedure.

Khamenei’s call came after a group of conservative lawmakers complained about the Expediency Council’s initial decision, which had required the minister of economic affairs and finance to nominate a candidate for the governor position and the president to appoint him for a renewable period of five years with Cabinet approval.

Immediately after the first approval, almost all critics, including former CBI Governor Mahmoud Bahmani, warned that the monetary policymaker should not be appointed by the financial policymaker (the minister of finance), arguing that the decision was a step backward, since the appointment procedure was the same as that of 50 years ago, when the CBI had just been established.

Other critics say if the governor is appointed by the president instead of the minister, he will at least have a stronger position in the world scene, even if he is not yet fully independent.

The approval of the Expediency Council, however, is very much similar to what was specified in the older version of the state Monetary and Banking Law, enacted in 1972, and the Fourth Five-Year Economic Development Plan, which required the CBI "general assembly" to approve the candidate nominated by the president.

The Expediency Council also made a final decision about the resignation or dismissal of the governor. Under its new decision, the president alone replaces the governor if he resigns or is dismissed.

Though the council's approval is considered by many a step forward, critics still believe that the Iranian Treasury has a long way to go to meet a global standard of independence. In Iran, the main consumer of money — the government — is in almost full control of the main producer of money — the CBI. That is totally different from what is seen in many developed countries, where central banks are relatively free to adopt monetary policies that are not necessarily in line with their governments' financial policies, to control the liquidity growth rate and eventually stabilize markets.

In Britain, for instance, the Bank of England is independent in setting monetary policy. The Treasury reserves the power to give orders to its Monetary Policy Committee "if they are required in the public interest and by extreme economic circumstances," but such orders must be endorsed by parliament within 28 days.

Conservative lawmakers in Iran prefer an identical mechanism that would enable them to impeach or question the governor or the official in charge of appointing and dismissing him, a desire that seems unlikely to be fulfilled now.

Earlier this month, Mohammad Reza Pourebrahimi, the parliamentary observer in the Money and Credit Council — of which the CBI is a member — complained that the Expediency Council “has given full authority to the administration.”

Monetary experts with a tendency toward Reformist and moderate politics disagree with the council's dismissal procedure, arguing that it's more important to change the procedure to dismiss the governor than who appoints him. The easier a governor is replaced, the more market stability is threatened, argued Mohammad Hashem Pesaran, a professor of economics at the University of Southern California, in an interview with Eghtesad News.

The governor cannot and must not be dismissed unless he clearly violates the law or commits a financial crime, he said in the interview. Even in that case, the judiciary would be the one to judge, not the president, he said.

Pesaran supports a mechanism that would make it difficult for the government or any top official — read: the president — to easily dismiss the governor. To avoid the negative effects of hasty decisions, he has suggested that the governor shall serve for a period of not shorter than seven years — a term two years longer than that approved by the Expediency Council on Nov. 15.

Many economists argue that a longer term of governance in the CBI could help bring “stability” to the monetary policy and therefore decrease expectations of inflation.

However, the government has gone too far in its interference with the Central Bank, though it is fully aware of the consequences. Assistant professor of finance at California Polytechnic State University Mehdi Rastad, in an editorial published by Donyay-e Eghtesad Nov. 10, called the behavior “time inconsistency.”

"Although the policymaker seeks autonomy for the Central Bank, it would fail to execute the will of the establishment to stop interfering in the bank’s affairs when it runs into financial difficulty,” Rastad said.

With the Expediency Council’s latest decision, the CBI's slow pace toward independence seems likely to continue for years unless the academic elite group starts pushing policymakers to make a painful but necessary decision that would prevent the government from dictating its policies.