Two Democratic lawmakers have singled out Palestinian President Mahmoud Abbas as the reason they are holding up the release of funds for an aid package to the West Bank and Gaza Strip. 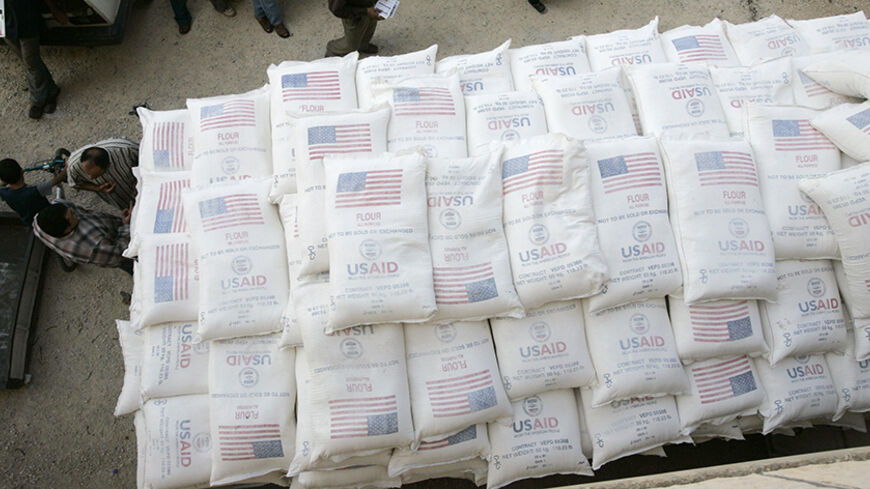 Palestinians stand beside a truck loaded with sacks of flour received from the US Agency for International Development (USAID) in the village of Anin near the West Bank city of Jenin, June 4, 2008. - REUTERS/Mohamad Torokman

US lawmakers have released most of their holds on a $230.3 million aid package to the West Bank and Gaza, Al-Monitor has learned.

The US Agency for International Development (USAID) notified Congress of the proposed spending in late September, prompting members upset with the Palestinian Authority (PA) to block the request. Since then, lawmakers have cleared all but $17.2 million of aid in their bid to bolster the PA and Fatah against its Hamas rivals while holding Palestinian President Mahmoud Abbas to account for what they view as his role in the worsening violence against Israelis.

The aid package aims in part to get around congressional prohibitions on direct aid to the PA following Fatah's reconciliation agreement with Hamas in April. It does so by applying $100 million directly to PA creditors, according to a recent analysis by the Congressional Research Service.

The USAID package was sent over to Congress on Sept. 24, and was briefly held up in its entirety by Sen. Patrick Leahy, D-Vt., chairman of the Senate Appropriations panel with jurisdiction over foreign aid, sources said. Leahy's office did not respond to a request for comment.

Since then most of the money has been released except for two projects worth a combined $17.2 million, several sources told Al-Monitor. Two Democrats — Senate Foreign Relations Chairman Robert Menendez of New Jersey and Rep. Eliot Engel of New York, the top Democrat on the House Foreign Affairs Committee — are said to be blocking the funds.

The two blocked projects include $4 million in renovations to PA offices and a $13.2 million road construction project near the West Bank city of Jenin. The lawmakers don't seem to object to the projects themselves but rather have concerns that they could benefit Abbas politically.

"The Palestinian people deserve a real leader who is willing to negotiate toward a two-state solution," Engel told Al-Monitor in an emailed statement. "We've been told that Abbas is the best we're going to get, but that's not enough. What we've seen is the same old incitement and excuses. Now is not the time for ribbon cutting celebrations for Abbas."

Engel and other lawmakers fault Abbas and his Fatah party for what they view as inciting violence surrounding the Temple Mount protests. Lawmakers are also incensed at the Palestinian leader's decision to seek action at the UN on a resolution setting a timeline for Israel's departure from the occupied territories, just two days after the aid request was delivered to Congress.

Despite the $17 million hold and the growing criticism of Abbas, US funding for the PA is unlikely to stop as long as both the White House and the Israeli government believe Abbas is better than a Hamas alternative. The State Department has asked for $440 million in its fiscal year 2015 budget request, in line with previous requests.

"The Palestinian Authority will be getting aid from America because we want a two-state solution, but you better get your act together,” Sen. Lindsey Graham, R-S.C., who will be taking over from Leahy in January, told the Israeli American Council earlier this month, according to The Times of Israel.

Just to be sure, the PLO delegation to the United States hired lobbying giant Squire Patton Boggs earlier this month for $660,000 a year. The firm's main job, according to filings with the Justice Department: "Assist the PA in assessing US funding promises to Palestinians to date and help ensure that such US commitments of financial assistance are fulfilled and received by the PA."