In an interview with Al-Monitor, Ashkelon Mayor Itamar Shimoni argues that the decision to halt work by Arab Israeli construction workers in his city was intended only to allay tensions, saying, "I believe that Arab Israelis are part of us." 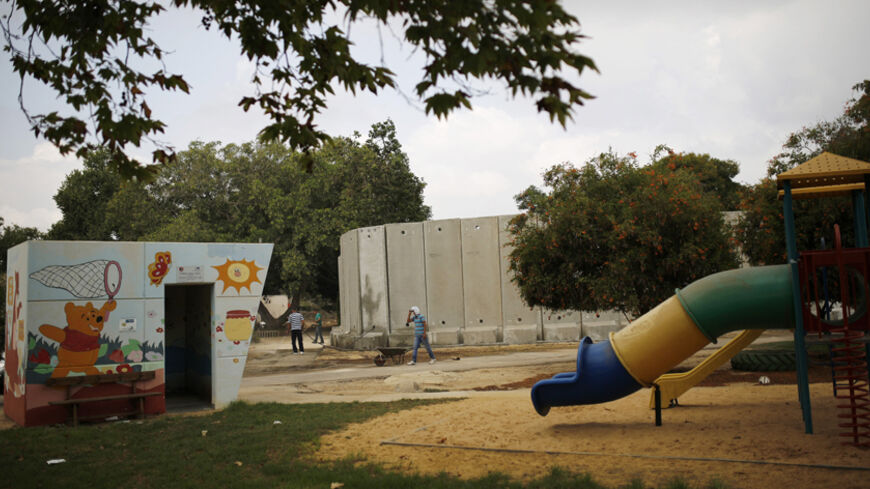 Laborers work near a kindergarten surrounded by concrete blast walls erected to protect against Palestinian rocket and mortar salvos, on the first day of the school year in Kibbutz Nahal Oz, just outside the Gaza Strip, Sept. 1, 2014. - REUTERS/Amir Cohen

Of all the strong condemnation following the Nov. 19 decision by Ashkelon Mayor Itamar Shimoni to stop the work of Arab Israeli construction workers in kindergartens across the city, that of Economy and Trade Minister Naftali Bennett incensed him the most: “As minister of economy and trade, I won't be part of hurting any worker because of his religion or race.”

“Look who is calling the kettle black,” Shimoni said during an interview with Al-Monitor. “Suddenly, the right-wing Bennett ostensibly defends Arab Israelis. It might have been very nice had it not been imbued with hypocrisy. He holds a certain position year-round, yet all of a sudden he comes out with all sorts of statements against me. I regret that these are the people who run the State of Israel.”

Shimoni made his controversial decision in the wake of the Nov. 18 massacre at the Bnei Torah Kehilat Yaakov synagogue in Jerusalem. According to him, the ban on the city employing Arab construction workers was supposed to be lifted after the storm blew over.

But the damage to the city and its image was almost instantaneous. Plazit Packaging, a plant from Kibbutz Gazit in the north of Israel, which employs Jews, Arabs and Druze, decided to call off a planned trip there for its employees. Ashkelon had been chosen as a vacation resort after it was hit by some 230 rockets during Operation Protective Edge this past summer.

“The decision to cancel the vacation was not meant to impose sanctions on the city. We will go to places where we feel welcome,” the company’s CEO Yehuda Ben Haim told Al-Monitor. “We love Ashkelon. It suffered enough during the war. But you can’t go to a place where you don’t feel welcome, where the mayor conveys a message that he doesn’t want you or me. That was an unfortunate and uncalled for statement by the mayor. It shouldn’t have been said, and it’s a shame that it was. I’m not willing to take the risk of having an employee of mine subjected to racist slurs while strolling the boardwalk. So I made it easier for the mayor and canceled the excursion. I’ll go to Tel Aviv, where I feel wanted. Other towns that took a beating during Operation Protective Edge also invited us. We’ve been told that they agree with us 200%.”

By Nov. 23, a compromise had already been brokered, allowing the Arab workers to resume their construction work on the schools. The children from those three kindergartens will attend a week at a community center until the construction work is completed.

Shimoni denies that the public outcry stirred by his initial decision prompted the return of the workers.

The text of his interview follows:

Al-Monitor:  Don’t you think your decision was upsetting and offensive to Arabs?

Shimoni:  There was never a decision not to hire Arabs or to fire them. I believe that [Arab Israelis] are part of us and have equal rights. There are dozens of construction sites across Ashkelon, where hundreds of Arab Israelis are employed. Arab doctors and nurses work in the city hospital. I am all for equality.

Arab workers were doing construction work in three kindergartens in the city, building safe rooms. After the attack on the synagogue in Jerusalem, parents didn’t want to send their kids there. There was tremendous tension between the parents and the workers, and I think I made the right decision. I asked the workers to come after 4 p.m., when the kids are no longer in school, and my decision was intended only to allay tension and reduce potential friction. But the way it came across was as if Ashkelon doesn’t employ Arab workers or that it fired them.

Al-Monitor:  So where did the public storm and the criticism of you come from?

Shimoni:  It came from politicians who are chasing after headlines. They each pull in their own direction. Right-wing politicians suddenly wanted to show they’re actually centrist, whereas left-wing politicians were quick to say "I told you so." However, the leadership should exercise discretion at friction points, similarly to when the security forces ban Jews from visiting the Temple Mount when there’s tension — which is the right decision. All those politicians who visit the Temple Mount and cause provocation are guilty of the situation. They’re the ones causing the intifada.

There was no sweeping decision to prohibit Arabs from working in the city and we didn’t discriminate against them. That's not the situation. I’m sorry if this is how it was understood. That was not our intention.

Al-Monitor:  So essentially, you were misunderstood?

Shimoni:  In my estimate, politicians are trying to score certain achievements in preparation for the general elections. But that’s not the right time. The timing is off. This shows lack of leadership, because what we have right now is an emergency situation. We all see that there’s tension between Arabs and Jews, so now is the time to promote the Nationality Bill? Put it to a vote? Create more tension? What you’re doing now is simply to provoke the Arabs.

If that bill had come up during peaceful times, it would have all looked different. But right now, it’s sheer provocation. It’s exactly like the construction in Jerusalem. You want to build in Jerusalem? Just go ahead and do it. Why make headlines? Why provoke? It’s inconceivable. Leaders need to do more and talk less.