US Vice President Joe Biden’s instant apology to Turkish President Recep Tayyip Erdogan may be considered a technical obligation, but not a denial of the merits of what has been said. 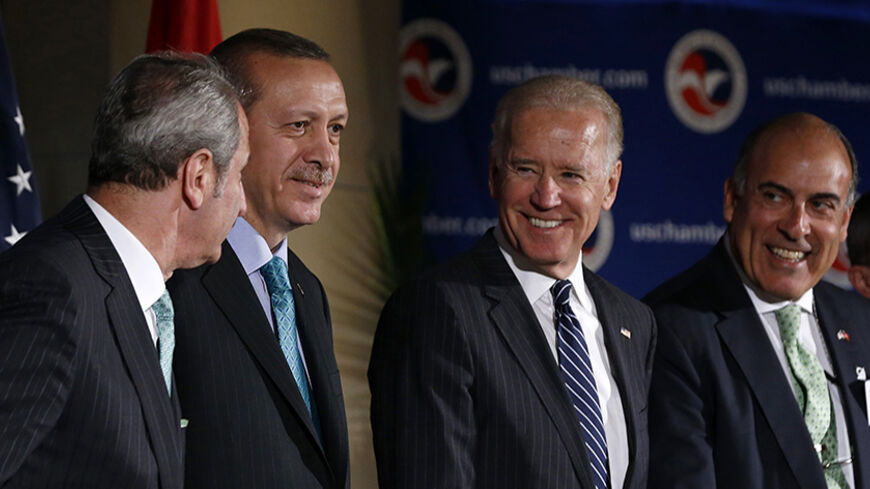 US Vice President Joe Biden stands with Recep Tayyip Erdogan (2nd L) at the US Chamber of Commerce in Washington, May 16, 2013. Erdogan, now president of Turkey, was prime minister at the time. - REUTERS/Jason Reed

Turkish President Recep Tayyip Erdogan received an instant public apology from the White House following US Vice President Joe Biden’s remarks Oct. 2 at the Harvard Kennedy School. Biden delivered his personal apology to Erdogan via telephone Oct. 4, and the White House issued a statement saying that Biden did not intend to imply that Turkey “intentionally” facilitated terrorists. While this apology — after a student questioned whether the United States should have acted earlier in Syria and why this is the right time now — has not yet appeared on the White House website, its YouTube audio upload of Biden’s speech includes one problematic segment (at the 1 hour, 32-minute mark).

The question is in fact a perfect reflection of Turkish Prime Minister Ahmet Davutoglu’s approach to the Syrian dilemma. “No one has neither the right nor the license to criticize Turkey,” Davutoglu said Oct. 4. “The US administration and Joe Biden know too well that Turkey has been continuing to provide a safe haven to the [Syrian] refugees for four years, and if our warnings had been heeded at the beginning, we would not be living these tragedies today.”

Biden, however, expressed an unmitigated disagreement with this assumption. The vice president said at the Harvard Kennedy School, “The answer is no for two reasons. One, the idea of identifying a moderate middle has been a chase America has been engaged in for a long time. We Americans think in every country in transition there is a Thomas Jefferson hiding beside some rock or a James Madison beyond one sand dune. The fact of the matter is the ability to identify a moderate middle in Syria — there was no moderate middle, because the moderate middle are made up of shopkeepers, not soldiers. They are made up of people who in fact have ordinary elements of the middle class in that country. And what happened was and history will record this …

“What my constant cry was is that our biggest problem is our allies. Our allies in the region were our largest problem in Syria. The Turks were great friends. And I have a great relationship with Erdogan [whom] I just spent a lot of time with. The Saudis, the Emiratis, etc. What were they doing? They were so determined to take down [Syrian President Bashar al-] Assad and essentially have a proxy Sunni-Shia war. What did they do?

“They poured hundreds and millions of dollars and tens and thousands of tons of weapons into anyone who would fight against Assad. Except that the people who were being supplied were [Jabhat] al-Nusra and al-Qaeda and the extremist elements of jihadis coming from other parts of the world. Now you think I'm exaggerating. Take a look: Where did all of this go? So now what's happening? All of a sudden, everybody is awakened because … [IS] which was al-Qaeda in Iraq, which when they were essentially thrown out of Iraq, found open space and territory in ... eastern Syria, worked with al-Nusra who we declared a terrorist group early on and we could not convince our colleagues to stop supplying them. So what happened? Now, all of a sudden, I don’t want to be too facetious, but they have seen the Lord! Now ... the president's been able to put together a coalition of our Sunni neighbors, because America can't once again go into a Muslim nation and be the aggressor. It has to be led by Sunnis to go and attack a Sunni organization. So what do we have for the first time?”

The White House YouTube audio of this event ends with that question, and does not include Biden's other comments about Erdogan, where Biden, making a reference to militants crossing into Syria from Turkey, said, “President Erdogan told me … 'You were right, we let too many people through,'” and said Turkey was now trying to seal its border.

Erdogan reacted to this on Oct. 4 by saying, “If he did say those words, Biden is then history to me. I never told him such a thing. Second, we have never helped any terror organization in the slightest bit. No one can ever prove that. No foreign fighter has penetrated into Syria through our country. Our sensitivity continues on that issue. We banned the entry of 6,000 people to Turkey and deported 1,000. It is wrong to accuse Turkey of such a thing. I condemn it,” adding, “We have never said in our last meeting in the US anything like, 'We made a mistake.' We never had such a position. We did not tell them that they were right on this issue. If Biden said such a thing, he needs to apologize.”

On Sept. 26, I wrote for Al-Monitor about criticism from top US officials — without naming Erdogan and Davutoglu — about Turkey’s ambiguous relationship with terror organizations. The article also pointed to President Barack Obama's rebuke of Erdogan without naming him in the US leader's UN General Assembly speech. Obama laid out how the two presidents have different value systems, yet concluded, “The United States will remain glad to see Turkey on board in any capacity possible in the fight against IS, and all these conflicting interests and contradicting values will be put to sleep — until the next rift comes around.”

So the Biden apology was issued to keep Turkey as part of the coalition. Still, it is not yet clear how Turkey will contribute to the US-led coalition against IS. Gen. John Allen, Obama’s envoy to coordinate the coalition, will be visiting Turkey this week to try to hammer out the Turkish role in the fight. Erdogan’s reaction to Biden made clear that the Turkish government has three conditions for the coalition.

Haldun Solmazturk, who spent many years serving with NATO, told Al-Monitor that the United States extended its apology to Erdogan not challenging the merits of what was said, but because it needs Turkey in the coalition against IS. “Otherwise, they could have easily shot back, ‘Well, we did not say they crossed the border as an armored, reinforced squad marching quickly!’” Solmazturk said.

The tricky thing now is that if Erdogan stays true to his word on these three conditions, the potential exists for Turkey to not join the coalition. The Turkish government still affirms that Assad needs to go for Syria to be stabilized; this is in direct contrast with the coalition’s mission. It seems that after Libya, there is no appetite for toppling regimes without a recipe for a secure and stable outcome — just as Biden outlined in his answer that there is no Thomas Jefferson or James Madison waiting in these countries to fix things.

In case Turkey does act alone, and its leaders continue to say what they think is right, the United States, Russia, Iran and others — i.e., the Arab states — would likely make Turkey pay a price. Hence, the apology remains a technical correction to what has been the US administration’s perception of the Turkish position for some time.