Ankara’s failure to win a seat on the UN Security Council adds grist to the mill of those who argue that President Recep Tayyip Erdogan and Prime Minister Ahmet Davutoglu have left Turkey with few friends in the world. 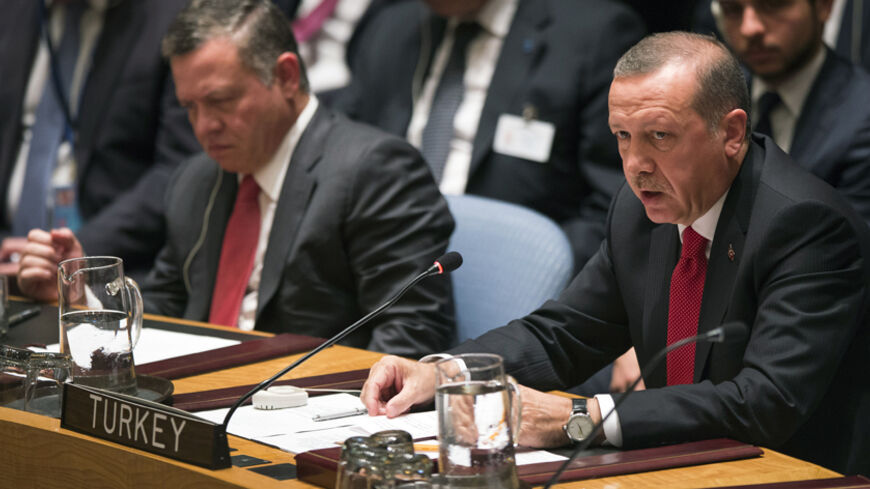 Turkey failed on Oct. 16 to win the coveted nonpermanent seat at the UN Security Council that it hoped would reinforce its influence in regional affairs, which has seriously dwindled in recent years. The result is a disappointment for President Recep Tayyip Erdogan and Prime Minister Ahmet Davutoglu, who hoped for a victory at the United Nations to counter claims that their policies have left Turkey isolated internationally.

Turkey was racing with Spain and New Zealand for the two nonpermanent seats open to the “Western European and Other States Group” for the years 2015-16. New Zealand got elected with 145 votes, gaining the required two-thirds of the vote in the first round.

The race between Turkey and Spain continued until Turkey lost in the third round when its support dropped down to 60 votes — down from 109 in the first round and 73 in the second. Spain’s vote went up to 132 in the final count.

Despite the odds against Turkey, Foreign Minister Mevlut Cavusoglu sounded optimistic the day before the voting, during an expensive reception held by the Turkish delegation in the famous Waldorf Astoria hotel in New York City to lobby for Ankara’s Security Council bid.

“Everyone is aware of the role Turkey plays in international organizations and at the UN,“ he said. “We think all our nice efforts will, with the grace of God, be reflected on to the ballot box tomorrow. Of course, this is a vote and all kinds of results may come out. But we believe, God permitting, that we will get the result of the work we put in.”

This optimism is seen to have been misplaced. The result of the secret ballot held in the UN General Assembly was in stark contrast with the result obtained in 2008 when Turkey got a record 151 votes out of 193 and was elected to Security Council in the first round of voting for 2009-10.

At that time Ankara’s prestige was high, not just among Islamic countries, but also Asian, African and even Caribbean countries that hoped to have an influential voice at the Security Council through Turkey.

The result of the voting this time has also raised questions about the logic behind Turkey’s applying for the Security Council membership only two years after it held this membership. Diplomats have been pointing out for some time that it is unlikely for a country to win a seat in the Security Council so soon after having held it before.

This point was also underlined for Al-Monitor by retired Ambassador Volkan Vural, who was Turkey’s permanent representative at the UN in 1998-2000, and who is currently a member of the board of directors of TUSIAD, the influential Turkish Industry and Business Association.

“Applying for Security Council membership so soon after having held it before was hardly a clever move. Our chance of winning was a million to one, particularly when Turkey’s popularity in the world is so low,” Vural said.

Asked if Ankara might still have had a chance of winning if its international influence was high, given that countries in the highly volatile Middle East could do with such a voice in the Security Council at such a critical time, Vural said this was highly unlikely, given historic precedent.

This brings up the obvious question: Why did Turkey apply for this membership when seasoned diplomats who know how the UN system works were aware that the chances of winning were so slim?

“This overconfidence by the government has no logical explanation. Perhaps they expected support from the Middle East, some Arab and European countries, and particularly African countries, but that support was obviously not there,” Vural said, questioning the government’s diplomatic capabilities

Pointing to the current war in Turkey between the ruling Justice and Development Party (AKP) and the Islamist Gulen movement, headed by the Pennsylvania-based Turkish preacher Fethullah Gulen, Vural made an interesting point with regard to support for Turkey from African countries. “The Fethullah group has a strong presence in Africa with its schools, companies and trade network,” Vural said. ”The government worked through this group in the past to canvass support for Turkey. The fight between the government and this group is also likely to have had a negative influence on support from African governments.”

Pointing to the lukewarm ties Turkey has with Gulf states, which are angered by Ankara’s support for the Muslim Brotherhood and its vitriolic attacks against Egypt and its president, Abdel Fattah al-Sisi, Vural said it should be considered a success that Turkey even got the support it did in the first round of voting in the UN General Assembly.

Diplomats and foreign policy observers point out that 2010 was the turning point when Turkey’s international prestige started plummeting. This also corresponds to Davutoglu’s Foreign Ministry from May 2009 through August 2014, after which he became prime minister to replace Erdogan, who was elected president.

Davutoglu’s overambitious plans to make Turkey the key player in the Middle East and the Balkans had resulted in charges of neo-Ottomanism being leveled against him. This accusation continues to come up in the Middle East today in countries that are unhappy with Turkey’s policies in Egypt and Syria, as well as its support for the Muslim Brotherhood and Hamas, which are loathed by the region’s established order.

Many in the region also look on Turkey today as a country that has inflamed sectarian divisions along the Sunni-Shiite divide, and has backed radical Sunni groups such as Jabhat al-Nusra and the Islamic State.

Other reasons cited for Turkey’s loss of international prestige include the worsening state of democracy and human rights in the country since the brutal reaction by the authorities to the Gezi Park protesters in 2013, which got wide international coverage, and the rolling back of reforms that had been enacted by Turkey for its EU membership application.

The official statement by the Foreign Ministry after Turkey won Security Council membership in 2008 underlined, among other things, Ankara’s commitment to peaceful settlements of regional disputes, and its determination to play the role of facilitator to this end, as well as contributing to dialogue between faiths.

Despite these commitments, Turkey today has hardly any diplomatic ties left with Israel and Egypt, and very little dialogue with regional countries like Iran, Saudi Arabia and Jordan on establishing regional stability. Meanwhile, Erdogan’s continual criticism of the UN over Syria and Gaza, and efforts to spearhead what appears to be a futile campaign to reform the Security Council and reduce the influence of the permanent members, also appears to have brought little support for Turkey.

Cavusoglu told reporters in New York after Turkey’s failed attempt to gain a seat at the Security Council that some countries were unhappy over Turkey’s independent foreign policy. “There may be those who are disturbed by our principled stance,” Cavusoglu said, adding that time would prove Turkey correct.

“We will not abandon this stance for the sake of votes. We will continue to be the voice and conscience of countries that expect this from us,” he said, trying to put a brave face on a glaring diplomatic failure that will no doubt be also used politically in Turkey against the AKP government.