By promoting violent activism, the Kurdistan Workers Party is pressuring the Turkish government, while restricting the state to responding with narratives instead of military measures. 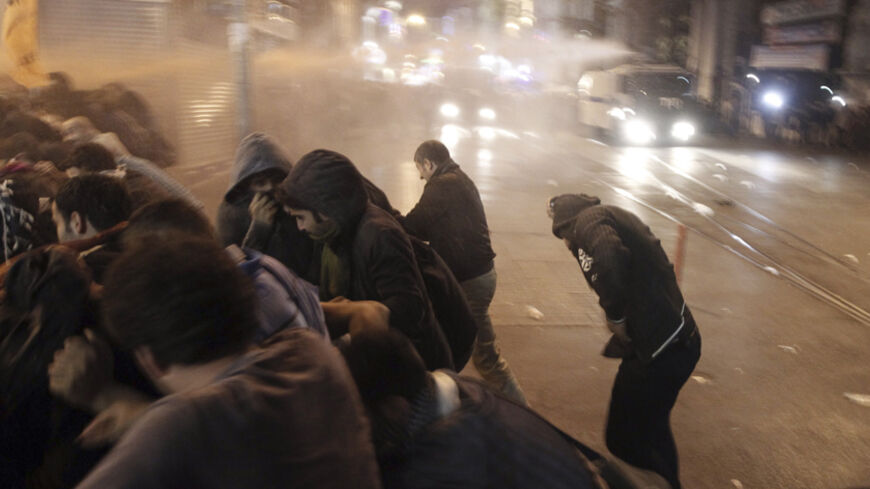 Protesters run from a water cannon used by riot police to disperse them in Istanbul during a pro-Kurdish demonstration in solidarity with the people of the Syrian Kurdish town of Kobani, Oct. 7, 2014. - REUTERS/Osman Orsal

After the intensification of street battles between the Islamic State (IS) and Kurdish People's Protection Units (YPG) in Kobani, the Kurdistan Communities Union (KCK) Executive Council released a statement that said, "Every Kurd and dignified person and friends should act now and enhance the resistance," calling for Kurdish youth to join the ranks of the fighters in Kobani.

Violent Kurdish protests spread to many cities in Turkey, including Ankara and Istanbul. At least 18 people have been killed so far, including 10 fatalities and 45 wounded in the clashes between pro-Kurdistan Workers Party (PKK) Kurds and Kurdish-Islamist Huda-Par partisans in the city of Diyarbakir, heavily populated by Kurds.

In several towns of six provinces, including Diyarbakir, curfews were imposed for the first time in 15 years.

Kurdish politicians declared their strong support for the street actions while senior People's Democracy Party (HDP) member Pervin Buldan said, "Kobani has not fallen. If Kobani falls, the peace process will be over.” HDP Co-chair Selahattin Demirtas said in a speech at Suruc, across the border from Kobani, “There is no step back after his time. From seven to 70, we will all resist.”

The response from the government's side to the street violence and angry statements of HDP officials was swift. Interior Minister Efkan Ala, instead of trying to lower tensions, responded in similar tough language, saying it was wrong to bring the Kobani issue from across the border into Turkey and added, “This illogical attitude must end right away. Violence will beget a disproportionate response.”

The Turkish government tends to attribute all recent events to Kurdish politicians’ inability to manage the solution process over the past two years. Taha Ozhan, the prime minister’s senior political adviser, accused the Kurdish political elite of dragging the Kurds of Turkey and Syria into uncertain adventures for their own interests. “This political attitude is irresponsible and the political costs, that will be paid notably at Kobani, are not the fault of Kurdish people but of those who are misguiding them,” Ozhan said.

While the streets have become battlefields in many cities and clashes continue unabated, how is one to interpret developments beyond the mutual accusations of Kurdish politicians and Turkish officials?

Kurdish politicians in Turkey have clearly linked the fate of Kobani to the peace process with Turkey, while government officials say the trouble in Kobani is an external affair that should not be related to the peace process. For Turkish officials, Kurdish politicians did not only mismanage the political process but opted to mobilize the masses with populist and romantic narratives. Of course, it is possible to argue that the PKK hopes the outburst of violence in major cities will drag Turkey into Syria.

Two realities have pushed the PKK to change its strategy. It knows now that it can’t cope with IS on its own, and it has lost its confidence in the United States. The PKK has realized that it can't rely on US air attacks to wipe out IS and decided instead to heat up Turkey’s streets and thus force Ankara to adopt a position against IS.

How can the PKK , while avoiding blame for ending the solution process, force the Turkish government to take a position against IS? This is where new tactics of activist violence, at lower levels than a guerrilla war but with high symbolism, come into play: blocking roads, harassment and burning Kemal Ataturk’s statues, Turkish flags and schools. The PKK is trying to prove that it can paralyze the state's authority with activist violence in the streets without resorting to military-style guerrilla warfare. The PKK must have decided that if it returned to its previous tactics of attacking military outposts and laying ambushes, the state will respond in kind with military countermeasures. This would make the PKK a target and may also upset the segments of the regional population that supports the peace process. Activist violence solves the dilemma. It allows the PKK to use violence while confining the state to responding with narratives instead of military measures.

With what has been happening in Kobani, the issue has gone beyond the YPG and the Democratic Union Party, and therefore the PKK has become a cause for all Kurds, making the government's classic messages of friendship and fraternity with the Kurds useless. As writer Rusen Cakir said, “For the Kurds to lose Kobani will never mean Turks have won.”

At this point, both sides are at once making efforts not to be seen as the side that has walked away from the negotiation table and disrupted the solution process, and calculating how to pressure the opposing party with all their resources. But all these strategic calculations, fueled by provocation, are increasing casualties in the streets. This is not the way to salvage the solution process.