The Syrian Women’s Forum for Peace has launched a new project to paint murals across Syrian cities, in an attempt to spread peace and life in the hearts of Syrians who are suffering from the effects of the war. 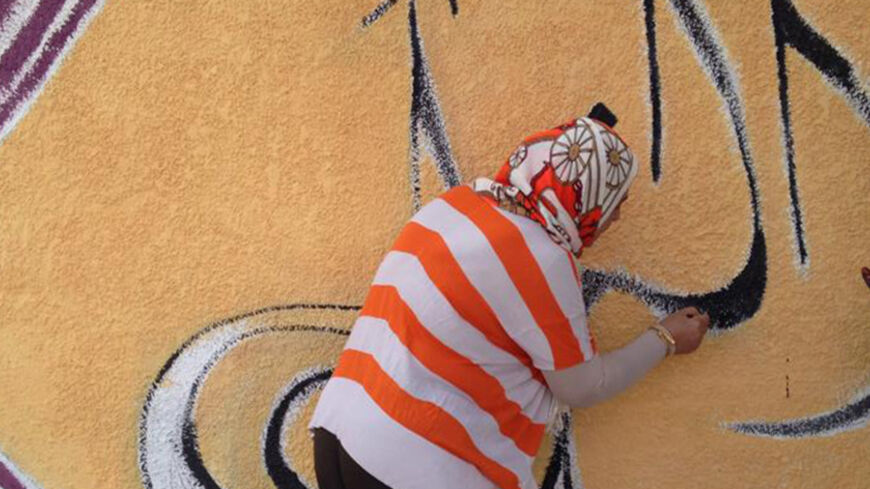 A member of the Peace Walls project works on a mural in An-Nabek, Syria, Oct. 1. - Syrian Women’s Forum for Peace
Mustafa al-Haj
October 9, 2014

AN-NABEK, Syria — The "Peace Walls" project does not intend to beautify or underestimate death, or to disrespect those who are haunted by death. It is an initiative to say that in Syria, there are people who deserve life and want peace, and to avow that we will keep giving and constructing to create a better and more beautiful future for all Syrians.

This is how Amira Malek, the executive director of the Syrian Women’s Forum for Peace, described Peace Walls, launched on Oct. 1. The forum is civil society organization that aims at mobilizing local and international opinion to pressure decision-makers into adopting peaceful methods in their political dealings and building a democratic state. As a first project, murals were drawn on the walls of the cemetery in the city of An-Nabek in the Damascus countryside.

An-Nabek is a city with a Christian minority, located at the heart of the Damascus-Homs highway, about 80 kilometers (roughly 50 miles) north of Damascus. It fell under the control of opposition militants in 2012, after a year of peaceful protests and security clampdown, only to be transformed into a theater of bombardments and sniper operations. The Syrian army would respond every time the rebels carried out military actions or kidnapped a member of the army on the highway. The "city of grapes and harisseh" (a local dish) was the arena of murder and kidnapping until it rose from the ashes of war after the Syrian army put an end to the bombardments when it restored control over it in December 2013.

The Peace Walls team works on a mural in An-Nabek, Syria (photo by Syrian Women’s Forum for Peace)

The idea behind Peace Walls was to spread art beyond the realm of exhibitions and make it accessible to a wider spectrum of society. The project uses art to convey a message of peace through a team consisting of painters and volunteers from different governorates. The team will visit the selected cities, get to know them closely and leave an imprint of peace.

Malek spoke to Al-Monitor about the reason behind choosing An-Nabek to kick-start the project. “The city witnessed bloody incidents, claiming the lives of many civilians. I'm a resident of this city, which explains my emotional attachment to it. My father was buried in the cemetery whose wall we painted.”

She said, “We seek, with this project, to integrate art and peace through a mural called ‘Peace Walls.’ We chose as a slogan ‘from death to life.’ This is why we will be painting the walls of cemeteries.”

Al-Monitor arrived at An-Nabek in the early morning of Oct. 1, after passing through four Syrian army checkpoints and an hour and a half on the road. In front of the cemetery wall located east of the city stood 30 young men and women from Tartus, Damascus and Suwayda, the majority of whom are art students. An-Nabek has become a city of destroyed buildings with bullet-pierced, blackened walls. Soon, the brush strokes of the artists transformed the walls selected for the first nine murals.

A completed mural (photo by Syrian Women’s Forum for Peace)

An-Nabek residents were waiting for us, including youth and senior citizens, and brought the volunteer artists water and food. Hours passed, and a team from Deir Atiyah, some 10 kilometers (6 miles) to the north of An-Nabek, joined in. The front yard of the cemetery was bustling, and the mural started taking shape. Swallows, grapes and wicker baskets, representative of the city of An-Nabek, were illustrated in one of the paintings. Another painting depicted a mosque and church separated by old houses and a peace dove. Another was made up of a number of different cubes representing the diversity of the Syrian people. After seven hours of nonstop work, the gray wall was transformed into an 83-meter (272-feet) mural of vivid colors.

Al-Monitor met with one of the volunteers, Sulafa Abu Senn, a resident of An-Nabek and a teacher of feminist art, who had brought 12 students. She said, “I participated in painting the wall with my students to show that An-Nabek’s war wound has healed. I wanted to give my students a moral boost. I haven’t seen them this enthusiastic before. I hope this fire will also be ignited in the hearts of the residents, so that life in An-Nabek will go back to what it was before, and optimism will be restored.”

The volunteer team (photo by Syrian Women’s Forum for Peace)

“The cemetery has always been a symbol of death and end of life. However, when the residents will walk past it today, the colors will remind them that life goes on,” she added.

Peace Walls stresses building peace in Syria through different means as well as through empowering women. The project will not end here. It will move to other cities to spread the “from death to life” concept and build other Syrian peace walls, combatting the prevalent culture of war and violence.