Young Syrian musicians perform on the streets of Damascus to engage passersby, despite the security crackdowns. 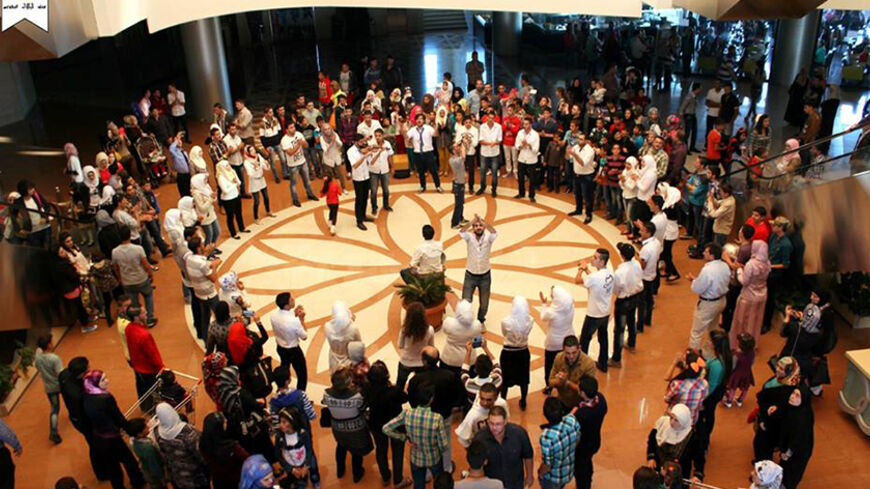 DAMASCUS, Syria — As a result of the Syrian conflict, cultural events have been on the decline in Damascus. Yet, some performers have moved from theater stages to the streets, with passersby as the audience.

Young Syrians have become familiar with the organization Meet Us On The Road, whose members appear unexpectedly on the street with their instruments to recite their "musical" prayers, only to disappear suddenly.

The group's most recent appearance on Oct. 9 was different. Titled “Musical March,” six young men and women started a musical march in Old Damascus, at the Khan Asad Pasha in al-Buzuriyah Souk.

Nawar Ismandar, a participant in the march and member of Meet Us On The Road, told Al-Monitor, “What is different about the performances that we give is that they are unexpected. The street is our theater, and the people there are the audience.”

“We started this project, the first of its kind, to embrace all the youth who haven’t had the chance to express their artistic potential. We get to introduce new unknown artists every time we give a performance. We get these [youth] engaged in the experience of live performances, although we do not perform on a real stage,” he said.

The march started at half past nine and went through al-Buzuriyah Souk and the silver market behind the Umayyad Mosque. The first stop was the famous stairs of al-Nawfara, where people gathered in front of the historic coffee shop at the base of the stairs. The music rose above the noise of the street. Passersby stopped, smiled, gathered around the band and sang with them. For a moment, it felt like the war was over. It felt like everything was at its best.

Street gatherings are currently very dangerous given the instability and the unforgiving mortar fire heavily hitting the old city. Moreover, security forces are no longer showing any leniency toward suspicious groups. Still, the band managed to get the necessary security approvals to perform.

When asked about the mortar fire, Ismandar said, “Life goes on and we will not give up. We want to put a smile on people's faces. We want to say that we still want life, that we are here to say we are not afraid of anything.”

Ismandar continued, “We neither announce the place nor the time of our performance, and this gives us freedom during our rehearsals, but this freedom in place is not necessarily associated with freedom in time, as we have to give short performances and take into account the tightened security measures in the capital.”

The group formed in 2012, performing near the Tekiyye Mosque in central Damascus, as well as at shelters for displaced people. However, the deteriorating security situation in the capital and limited financial resources pushed the group to scale back its performances. The group relies on personal donations from the team and musicians, according to Ismandar, who said that the group plans to organize concerts, regular theatrical performances and art exhibitions. 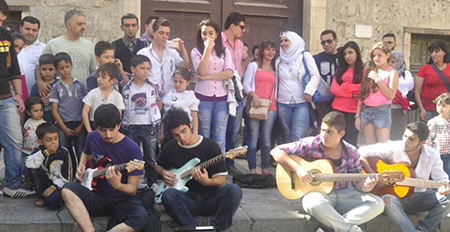 Similar groups exist outside the capital in the city of Deir Atiyah in Qalamoun, located 90 kilometers (56 miles) north of Damascus. The Jood Voluntary Team started the initiative “Music Flash” on Oct. 7 during Eid al-Adha, aiming to create a fun atmosphere among residents and those displaced from other regions. Thirty volunteers prepared and performed several patriotic and popular songs related to Eid in Deir Atiyah's commercial center.

According to Abdul Majid Rahman, a member of the group, the aim was to promote a culture of peace through music. “We need music today more than ever,” Rahman said.

Members of the band sang and performed instrumentals for the crowds. The most beautiful moment was when they sang the traditional Arabic song titled, "Who let the gazelle run away?" (with the gazelle being in reference to a woman), as youths started dancing and jumping spontaneously. Rahman commented, “We honestly had not planned to dance, we just did it spontaneously and it added value to the initiative.”

Since November 2013, when it was stormed by opposition fighters, Deir Atiyah has been the site of clashes between the Syrian army and the opposition. The team faced setbacks and couldn't perform due to many difficulties. Rahman told Al-Monitor that such security difficulties prevented the team from undertaking such an initiative during last Eid al-Fitr, when tanks were stationed in the courtyard of Deir Atiyah.

The Jood Voluntary Team was created after the bombing of the Deir Atiyah municipality on July 14, 2013, when the team went on to engage in volunteer work and community service, mainly relying on donations from the team members.

Following the intensification of the armed conflict in Syria, numerous public performance initiatives have emerged that strive to heal the rifts between Syria’s different social groups and communities. These groups see art as the only way to motivate Syrians to put aside differences and enjoy peace under one umbrella.