Looking behind the Russia-Iran relationship

Despite the common perception of Russia as Iran's main backer outside the region, the two big regional players’ relations are shaped by long-term interests that can clash with immediate concerns and may complicate the battle against the Islamic State. 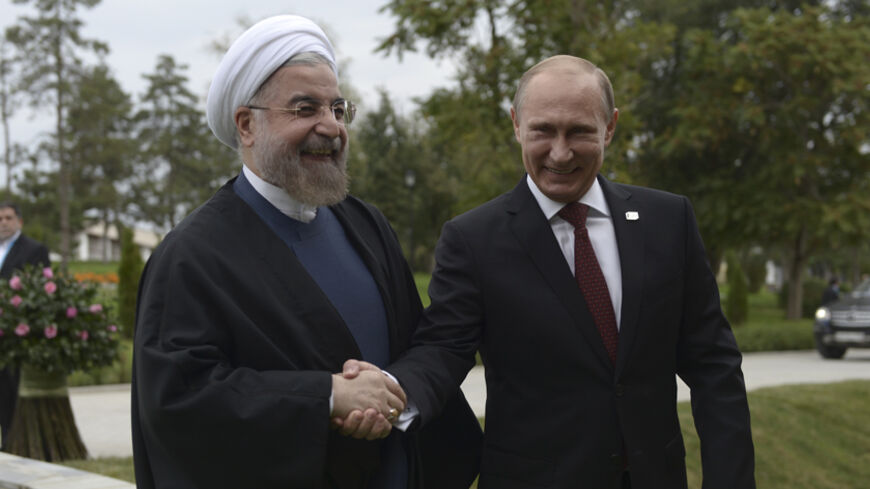 Overshadowed by the fast-unfolding developments in Syria and Iraq, the fourth summit of the Caspian states in the Russian city of Astrakhan didn't make the news. Yet, a closer look at the event reveals a potentially interesting issue between two big players — Russia and Iran — whose stances may become critical if the battle with the Islamic State (IS) expands further and requires a ground mission.

Arriving from New York for the summit in Astrakhan that dealt primarily with the legal status of the Caspian Sea, Iranian President Hassan Rouhani also held private talks with Russian President Vladimir Putin in which energy projects reportedly dominated the agenda. The two leaders had met previously — first in September 2013 at the Shanghai Cooperation Organization get-together in Kyrgyzstan and later in China in May 2014. However, now that Russia faces Western sanctions, it wants to make sure it remains a top energy supplier for Europe and is doing everything possible to engage Iran in this area before it takes part in potential alternative supply routes.

Iran's experience in surviving massive sanctions may come in handy for Russia. Despite the serious blow the sanctions dealt to the Iranian economy, the country showed that even though it has been "perplexed and troubled on every side," it hasn't been distressed nor fallen into despair — a task Russia too is trying to work out now.

Historically, relations between Russia and Iran have never been smooth. But the new reality of sanctions is pushing Russia to revise and refresh its relations with once sworn enemies and in the case of Iran, it certainly has some points of mutual interest.

There currently are four key foreign policy dimensions in the bilateral relations between Moscow and Tehran. Along with the energy issues, these include the nuclear program, the stabilization of Afghanistan — more widely, the security of the Central Asia — and the dramatic events in Syria, Iraq and the greater Middle East.

Russia and Iran express similar concerns on the US-led involvement in fighting IS in Syria, arguing it can only make matters worse and trigger the emergence of more terrorist groups. Meanwhile, Russian and Iranian experts and media outlets go even further, speculating that the whole campaign against IS fighters in Syria may be used as a pretext for invading the country.

Russia and Iran do share a strategic vision of the South Caucasus: as a zone free of military conflicts and a region impenetrable to an external (i.e., Western and Israeli) presence.

Most important for Moscow, Tehran was one of a few Muslim states supporting Russia's integrity during two Chechen wars and shared the Kremlin's vision that the jihadist movements there were fueled from without, primarily by the Gulf states. At the same time, Iran has no illusions about the methods and the political blueprint behind this "domestic insurgency" Russia struggles with. Iran perfectly understands the Russian Caucasus with its complicated ethno-political and socio-religious mosaic and silently projects its soft power on societies historically and culturally associated with the Persians (specifically North Ossetia). Moreover, it hasn't given up on the idea of becoming a more influential power in the South Caucasus.

The Iranians don't make noise, at least at a high level, when Russia's actions irritate them (from banning "Imam Khomeini's Last Will and Testament" in 2008 as "extremist literature" to calling off the delivery of the S-300 defense missile systems). Tehran surely didn't forgive these and other transgressions, but never based criticism of Russia on them.

The Russians still remember what happened to their famous intellectual, playwright and ambassador to Persia, Alexander Griboyedov, who was killed by an angry mob in Tehran in 1829. To this day, the incident serves as a warning for Russian policymakers to play it cool and smart with Tehran. Besides, the well-known Khomeini's statement that the United States is "the Great Satan" also invokes the idea of the USSR as "the Lesser Satan" — an allegory deemed by some analysts to be a reflection of a strategic vision Iran has toward contemporary Russia. Interestingly, at the public level, cautiousness toward Iran is even higher: A 2013 poll showed that 40% of Russians believe Iran's influence over world affairs is negative (only 10% view it as positive).

So despite the common vision that Russia is Iran's main backer outside the region, the nature of their relations is rather a classic Eastern-style game of speaking softly, disagreeing tacitly and behind-the-scenes deals on issues of mutual long-term interest even when the immediate concerns diverge (as in opposing IS and keeping Syrian President Bashar al-Assad in power).

Al-Monitor contributor Barbara Slavin has described US-Iranian relationship as “bitter friends, bosom enemies.” Russian-Iranian relations have a much longer history and in many ways a more nuanced agenda. But if one would coin a concise definition for their current dealings, it could easily be "compelled adversaries, pragmatic pals."