Although the Gaza Strip has received millions from the Palestinian government and international donors, many of those in need have not received any aid while others are cashing in more than they should. 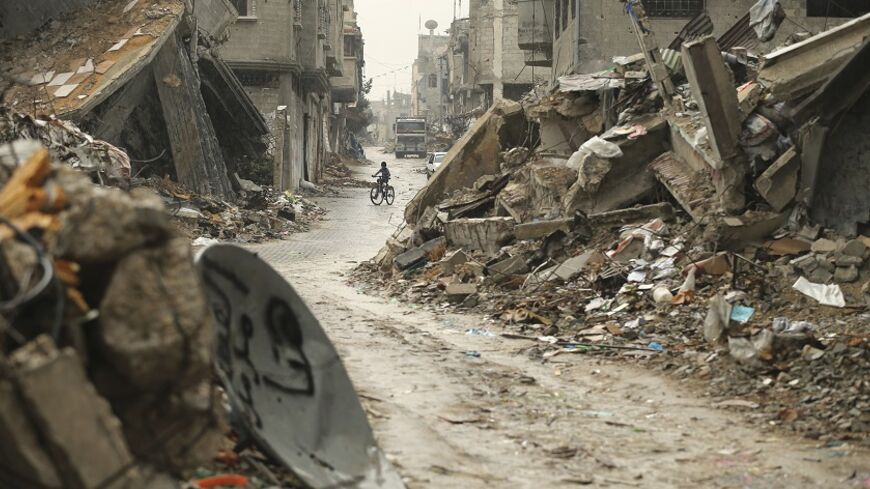 A Palestinian boy rides a bicycle past the ruins of houses destroyed during a seven-week Israeli offensive, on a rainy day in the east of Gaza City, Oct. 19, 2014 - REUTERS/Mohammed Salem

RAFAH, Gaza Strip — A Gaza Ministry of Interior official told Al-Monitor that some relief organizations have stolen from financial and material aid intended to be distributed to Gaza Strip residents.

Ayman Ayesh, director of Gaza's General Administration of Public Affairs and NGO Department, told Al-Monitor that the department had uncovered a multitude of thefts. He said, “We arrested a member of an organization that had received special aid for the displaced, following complaints indicating that he was stealing from the organization headed by one of his relatives. The allegations were proven true following an investigation, and the thefts, amounting to half of the assistance received by the organization, were recovered.”

Ayesh cited the sale of aid, particularly medical aid to pharmacies, as one of several infractions committed by those administering aid. He also said price fraud was prevalent among those selling the goods received by relief organizations.

“One of the organizations that we audited registered exorbitant prices on invoices for low- and medium-priced goods bought for those affected,” Ayesh said.

Al-Monitor heard several reports concerning the unfair distribution of food aid that comes in the form of vouchers or cash.

The governor of Rafah, Ahmad Nasr, helps supervise the disbursement of cash assistance to Palestinians in Gaza in amounts of 300 shekels ($80) per person. Al-Monitor spoke with him about the aid distributed to Gaza Strip residents.

Nasr told Al-Monitor that the Palestinian government was the source of said aid, “This assistance is distributed to refugees registered, as well as not registered, with relief agency shelters. We obtained the list of those registered from the agency and disqualified the names of those who did not deserve aid. We then added the names of those whose homes were partially or completely destroyed, those who lived in dangerous areas and those dangerously affected by the war.”

Despite Nasr’s assurances that the financial aid was governmental, he indicated that Palestinian factions in the city assisted in registering the names of beneficiaries, as well as monitoring and supervising the disbursement via a multipartisan committee. This explains the anger of many citizens who accused certain organizations of divvying up the aid between those parties.

To determine how the governor of Rafah and the Palestinian parties received such aid, Al-Monitor spoke with Shawqi al-Issa, the minister of social affairs in the reconciliation government. He told Al-Monitor that the ministry gave the money to Gaza's Minister of Labor Maamoun Abu Shahla following a Cabinet decision to form a ministerial committee under his chairmanship.

Even though citizens received money in the name of the Ministry of Social Affairs in the West Bank, the ministry was bypassed as a result of the aforementioned mechanism. Issa justified the matter, saying, “We did not send it to the Ministry of Social Affairs in Gaza because the officials there have yet to supply us with data about how the aid being sent to the Strip was being disbursed. We therefore thought it better to distribute the money through the committee chaired by Minister Abu Shahla.”

Concerning the marginalization of the ministry as far as aid distribution was concerned, its representative in Gaza, Youssef Ibrahim, told Al-Monitor, “We have no knowledge about the 300-shekel disbursements, nor are we being coordinated with.”

Al-Monitor reviewed several lists of individuals who received cash assistance in Rafah and elsewhere. To our surprise, we discovered that the aid was given to multiple members of the same family, despite assurances by Nasr that only the heads of affected families received aid.

Nasr also conceded that cash aid was given to the same individual multiple times. He added, “Ninety people received cash aid on more than one occasion. This is not our fault. It is due to the fact that, for example, the same name was written using different Arabic spellings, resulting in these errors, for which we are not responsible.”

According to the governor, the “inadvertent” mistake led to the squandering of approximately 27,000 shekels ($7,215) in “the blink of an eye.” These factors combined have led to the loss of hundreds of thousands of shekels.

When confronted with this issue, Nasr replied, “This is proof of incivility and corruption. It is a problem caused by the people who collected the names of those who would receive aid. But, we are powerless to take any disciplinary measures against them.”

Bakr al-Turkmani, the legal adviser for the Coalition for Accountability and Integrity (AMAN), said that the coalition had received around 200 complaints from affected citizens. The complaints ranged from "lack of clarity in the information being requested, to vague procedures and standards concerning the disbursement of aid. This means that the complaints revolve around suspicions of corruption."

Turkmani told Al-Monitor that the relief aid sector was marred with suspicions of corruption. He added, "AMAN is working on a number of suspected corruption cases that took place during and after the war. Among those cases being reviewed is one revolving around the disbursement of 300 shekels by the Ministry of Social Affairs in the reconciliation government."

Turkmani attributed many of the shortcomings and suspicions of corruption in the disbursement of aid to a lack of organization and the absence of unified standards pertaining to the disbursement process, not to mention the failure to disclose the total aid amount received or the distribution mechanism for said aid.

The total amount of money and aid sent to the Gaza Strip during and after the last war with Israel remains a mystery. Local development consultant Ghassan Abu Mandeel, who worked as an adviser to many relief organizations in the Gaza Strip, told Al-Monitor, “The suddenness of the war and the lack of emergency strategies on the part of international and local organizations led to a humanitarian crisis. But the absence of a clear methodology by those organizations and the adoption of opaque standards to choose beneficiaries led to the squandering of a major portion of that aid.”

He added, “The lack of coordination between organizations during the war, and the weak oversight capabilities of relevant ministries led to many families selectively benefiting multifold during a short period of time. [It also resulted] in the squandering of opportunities to help needy families, as well as popular discontent in that regard.”

Abu Mandeel said that these factors caused confusion regarding the size of financial and material aid that entered the Gaza Strip during and after the war. He explained, “That is why the impact of this assistance cannot be quantified until after reconstruction is completed.”

Abu Mandeel accused some organizations operating in Gaza of committing fraud following the receipt of aid from international donors. The financial reports submitted by these organizations to the donors, according to Abu Mandeel, have been “doctored.”