In an interview with Al-Monitor, social activist Itzik Alrov argues that even though people don't take to the streets to protest, as they did in the summer of 2011, they keep watch on the distortions of price centralization and expect the government to intervene. 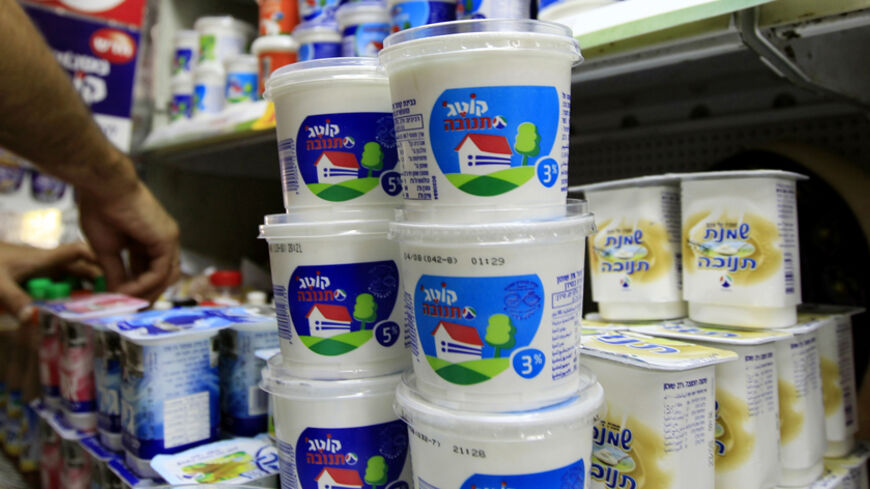 Tubs of cottage cheese in a shop in Jerusalem, July 27, 2011. - REUTERS/Ronen Zvulun

"We have failed in whatever concerns housing prices and cost of living, and we, the government, must deal with that." Defense Minister Moshe Ya’alon made this ostensibly social and heartfelt confession on Oct. 15, in a series of interviews he gave for the Sukkot holiday, responding to the so-called “Milky” (chocolate pudding snack) protest. The confession was drowned out by the melee of headlines he made regarding the defense threats facing Israel.

But it is actually this statement, not backed up by any action, that reflects the disconnect between the government and the changes that Israeli society has undergone since social protests broke out in the summer of 2011. Like the prime minister and other Cabinet members, Ya’alon may believe that caring words will appease the public, but the fuels of the protest are constantly simmering below the surface.

“The ministers’ big mistake is not understanding that they have an opportunity to save an entire generation,” says Itzik Alrov, the architect of the 2011 “cottage cheese protest” and one of the founders of the consumer movement against the high cost of living. “They think the protest will pass, but they don’t understand that the protest is alive and kicking. Today’s public understands much more and knows it is being robbed. It won’t give up.”

Alrov is one of the less familiar heroes of the 2011 social protests. Whereas Daphni Leef, Knesset members Stav Shaffir and Itzik Shmuli became media darlings of that time, with Shaffir and Shmuli subsequently elected to the Knesset, Alrov remained somewhat anonymous, though he is considered one of the most influential figures on social networks regarding the cost of living issue.

When the protest kicked off, he was 25, an orthodox Jew from the city of Bnei Brak, the father of a little girl, who understood something was wrong, that the system made no sense if young working people could not make ends meet. In June of 2011, along with several friends, he set up a Facebook page and called for a boycott of cottage cheese (a popular Israeli staple), the price of which had virtually doubled within a few years. The cottage protest got extensive media coverage and was in fact the harbinger of the major protest that erupted a month later.

Three years have gone by. Alrov now has two kids, but he hasn’t given up the fight to bring down the cost of living.

As one who is immersed in the "public pulse," sensing the social mood through social media as well, he was convinced the protest would return, just as he is certain that the current Milky protest is another stage in the fight to lower Israel's cost of living.

Alrov is a member of a young, activist generation that stokes the fires of social protest on a daily basis and will not let them die. They initiate social media campaigns designed to expose the "robbery-exploitative system" of food prices, interest rates and the real estate bubble. To a large extent, they are a persistent government headache.

Al-Monitor: You weren’t surprised by the Milky protest. Why is that?

Alrov: It was completely obvious to anyone who is immersed in the issue. The fact that people don’t take to the streets doesn’t mean all is well. Under the surface you can see the hardship. It didn’t go away and actually became even more pronounced. The price of housing keeps going up and people still can’t make ends meet in a dignified manner.

The Berlin protest, or the Milky chocolate pudding snack protest, is another expression of the high cost of living. There is a caring, Zionist majority here that’s fighting for a better future and waiting for an improved economic and social climate because it wants to realize the dream of living in the place where it was born. That’s why it’s wrong to blame the protesters for leaving the country, for being spoilt and post-Zionist. I suggest the government listen to them. They are crying for help. After all, no one really wants to leave the country, but there’s real distress here.

I’m telling the government not to try and divert attention from the problem, not to ignore it. It’s obviously easier to bash them for leaving the country and for dealing a blow to the memory of the Holocaust [allegedly by moving to Germany]. That’s a mistake, because the problem won’t go away unless there’s real change.

I, too, condemn the call [that went out on social media] to leave the country, but it’s obvious that the Berlin protest people are no more dangerous than the choice of some elected officials to ignore the cost of living issue.

Al-Monitor: The Milky protest doesn’t seem to be getting people out into the streets.

Alrov: It’s wrong to look at things that way. The question of who’s behind it and how many came out to demonstrate is irrelevant. The minute you stop attacking them and start listening to them, you understand what happened and how we got to where we are. You hear about people, some of whom served in elite army units, they are the future, but they cannot find themselves in the country where they grew up. Something went wrong here.

Until 2011, people didn’t talk about the cost of living. It was a marginal issue and defense was the be all and end all. Today, everyone is talking about it. Now, for instance, two months after Operation Protective Edge, the social protest is reawakening. People suddenly understood that there’s a unfit system that’s robbing them blind. In that sense, we are in a different era right now.

Al-Monitor: Why is the cost of living in Israel high?

Alrov: The answer is simple: There’s no competition. It’s exactly the way it was with the price of cell phones. Once people understood that an average bill comes out to several hundred shekels [a month] because of the insane centralization of a few companies that fix prices, they understood the distortion. After cell phones, people started looking at food prices and it dawned on them that here, too, the market is controlled by a handful of companies that fix prices. They hike and reduce prices as they sit fit. If the government takes apart this centralization of Israeli firms, prices will come down.

The Tnuva conglomerate, for example, controls the dairy market and everyone knows it. But it also controls the meat market and it has a pastry subsidiary and other subsidiaries which it controls and through which it buys additional firms. Any small company that dares to succeed a little is bought out. The minute a food producer like Osem takes over small firms like [baby food producer] Materna, you as a consumer think that you actually enjoy great variety at the supermarket, but it’s all controlled by a small number of companies.

Al-Monitor: Why doesn’t the government intervene?

Alrov: That’s what I want to know. I think that we have here some power centers that are apparently much more powerful than the government. If the prime minister were to bang on the table and get all the relevant government agencies involved, the price of food would come down by dozens of percent and the food barons would earn less.

Al-Monitor: Is Finance Minister Yair Lapid the hope of the protest?

Alrov: I look at his term in office and I think to myself, he’s the finance minister. He can call up the banking regulator and tell him — “by the end of the year, I want two new banks in Israel.” But nothing happens and there’s no competition among the banks. Lapid has political power that is not channeled in the right direction because he has succumbed to the system.

Al-Monitor: To what extent will this situation influence Israeli politics?

Alrov: I constantly hear on social media about hardships. They will not go away even if the government keeps saying that those involved are left-wing, post-Zionist anarchists. It won’t work because it’s a spin. I know that things are happening below the surface. The public is hungry for information and wants to understand the structure of the economy and the power centers, people want to know how the system works. The prime minister and his ministers have to realize that there’s life here, too, and that life has to be managed. You can’t scare people all day with defense issues and leave them unable to see out the month.