Lapid could end up paying for the price of pudding

The public outcry over the price of chocolate pudding snacks should signal to Finance Minister Yair Lapid and Prime Minister Benjamin Netanyahu that socioeconomic issues will dominate the agenda of the next elections. 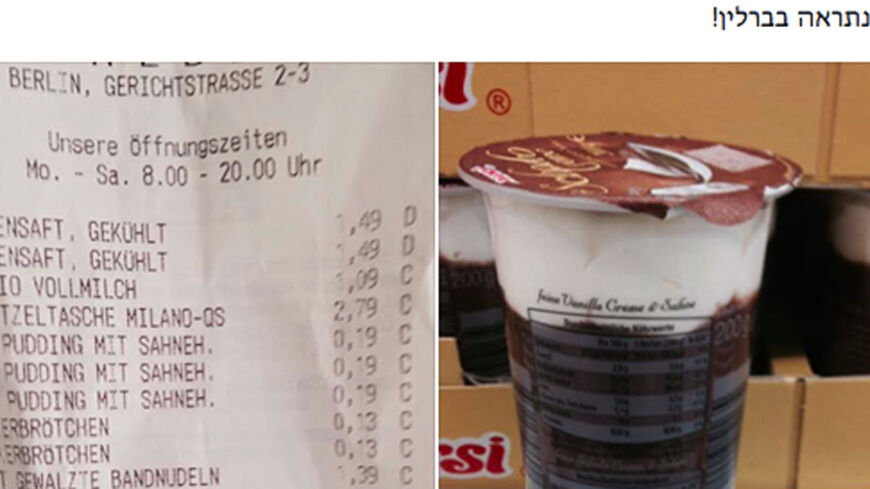 “I want to make it perfectly clear to the staff of the Finance Ministry and to the finance minister himself … [W]e are not political people. We are just run-of-the-mill Israelis who want a roof over our heads and food — basic needs. We don’t understand economics. We don’t understand regulation. Still, you'd better start learning geography. We are mobile, we are educated and we know how to move from one country to another.” That was just part of a post that appeared Oct. 6 on the Immigrating to Berlin Facebook page.

The “Milky” chocolate pudding protest had begun there a day earlier, spreading like wildfire across the social networks. Then the protesters responded to attempts to portray their concern as little more than detached griping by a bunch of spoiled Israelis, so alienated from the Holocaust that they would immigrate to Germany just to save a few shekels.

The protest began after someone posted a photo of a receipt from a grocery store in Berlin to the Immigrating to Berlin page. The receipt featured the prices of several staples, including orange juice and milk, which were fractions of the cost in Israel. What stole the show, however, was the price of a chocolate pudding snack, very much like a Milky, one of the most popular products produced by Israel’s Strauss Dairies: The price in Israel is three shekels (87 cents), while in Berlin it's less than one shekel (27 cents).

Ever since the social protests that erupted in 2011, the Internet has been inundated with random grocery receipts from around the world, proving that everything is significantly more expensive in Israel. Yet, the Milky protest provoked an outrage that quickly burst through the barriers of new media to dominate the daily news cycle. A day after the Milky post appeared, not a single current events show on radio or television could ignore it. In most cases, the media conducted quick surveys of supermarket food prices in major cities around the world, showing yet again that prices in Israel are usually significantly higher. One other thing the news coverage revealed was that the focus on the cost of living is unlikely to fall from the public agenda in the foreseeable future. This should worry Prime Minister Benjamin Netanyahu, and even more so it should worry Finance Minister Yair Lapid, a hero of the social protests of summer 2011.

If the owners of the Immigrating to Berlin page are correct, and Lapid really did prevent them from posting to his page, it is a futile attempt on his part to block an authentic protest. As someone who used Facebook to establish his political party, he, of all people, should have engaged in a dialogue with the protesters, instead of trying to obstruct them by delegitimizing their leaders. Though the outcry originated in Berlin, it's an authentic Israeli outcry, and it should be taken seriously.

That the Milky outrage gathered momentum only a few weeks after the conclusion of Operation Protective Edge should also worry Lapid and Netanyahu. It reflects a change in attitude among the Israeli public, with people no longer accepting without question the notion that “security needs” take precedence over economic priorities. They are now demanding that the state also ensure a decent living and deal with the issue of the cost of living.

As a leader of the 2011 social protests, professor Yossi Yonah is hardly surprised by the timing of the current outrage. Although the social protests disappeared from the street, he says that they have never stopped seething beneath the surface. “If the question is whether the conditions are ripe for more protests, then of course the answer is yes,” Yonah told Al-Monitor. “The public is discovering that the policy advanced by the current coalition, which rose in the shadow of the protests, is far more cruel and despicable than the one of the previous government. It includes for instance cuts to the education budget and continued growth in the poverty rate.”

In other words, the masses that took to the streets in 2011 never really stopped protesting. They protested by voting for Lapid and for Economy and Trade Minister Naftali Bennett in the last election, then waited to see the results, only to discover 18 months later that their lives have not really changed. If anything, their lives have gotten worse. A basket of groceries is still significantly more expensive in Israel compared with other places around the world, and Israelis are fed up with hearing excuses. They want to see change.

The situation is also worsening in the housing market. The price of apartments continued to soar this year, with the dream of owning one becoming ever more remote. The fate of Lapid’s zero VAT plan for some homebuyers is as unclear as its ability to impact the real estate market. In the words of the popular song by Shlomo Artzi that became an unofficial anthem of the protests, “suddenly a man stands up in the morning” … and finds that nothing has changed. [The original lyrics are “suddenly a man stands up in the morning and feels he is a people, starts his walk, saluting to peace all that he meets.”] All of this is laying the groundwork for a new wave of protest. Yet, it is still too difficult to predict the trajectory it will take.

Professor Manuel Trajtenberg, who headed the government committee created in the wake of the social protests, told the media Oct. 6 that the success of the initial protests had been limited. “An Israeli prime minister effectively serves as prime minister for foreign affairs and defense at least 90% of the time, rather than for social issues. That is one of the biggest problems we have. There is no one to take the lead on these issues on a steady basis.”

Trajtenberg has good political instincts and had considered running for the Knesset once the protests were over. Like Lapid, he was a popular figure, and the public believed that his heart was in the right place. It looks like Trajtenberg has once again identified the moment of public awakening and did not pass on the opportunity to have his say while criticizing the prime minister and the people surrounding him. Like former Communications and Social Welfare Minister Moshe Kahlon, currently forming a new party that will focus on social issues, Trajtenberg recognized the spirit of protest in real time. Both he and Kahlon are sure that this spirit will continue to hover over the country for a time to come and affect the next elections. The signals they received this week seem to indicate that they are right.