Accusing Israel of "genocide" would not prompt the UN to grant President Mahmoud Abbas a Palestinian state on a silver platter, but it did destroy whatever was still left of the bridge between the two people. 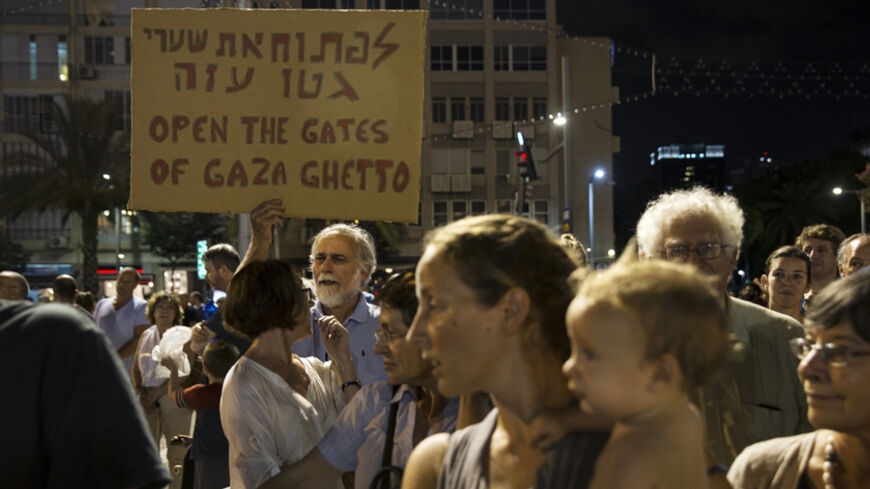 The Israeli-Palestinian conflict divides Israeli society into two camps. One group defines itself as the “national camp,” while the second calls itself the “peace camp.” The names are designed not only to testify to the characteristics, worldviews and objectives of the respective sides, but also to challenge the other camp. The national camp criticizes those it believes to be unpatriotic and not nationalistic, those willing to forgo parts of the homeland for a phony agreement. The peace camp, by contrast, opposes those who prefer the territories and settlements over peace with its Palestinian neighbors.

At the margins of the charged debate between the camps, a big question has arisen in recent years over whether Palestinian Authority President Mahmoud Abbas is at all a real partner for peace negotiations. Can he be trusted? Will he uphold his part of the bargain if and when an agreement is signed between the sides? Will peace also bring security to the Israelis?

The failures of the negotiations between Israel and the Palestinians and terror events have shrunk the peace camp. But even those who do not view themselves as an integral part of the shrinking peace camp, but still believe in the two-state solution, felt lost and deceived this week.

By adopting fallacious terminology on the UN podium Sept. 26, Abbas inserted the last nail in the coffin of what still remained of the Oslo Accord's foundations. He also extinguished the last flicker of hope among the remaining die-hard peace movement devotees.

“We told you all along,” the members of the national camp could simply say to those of the peace camp, “there is no partner, no one to talk to.”

A senior Fatah movement official, well versed in the workings of Abbas' inner circle at his headquarters in Ramallah, told Al-Monitor that Palestinian chief negotiator Saeb Erekat was the one who pressured Abbas, during the consultations that preceded the UN lecture, to use the “genocide” word. Erekat hurried to defend the speech, following the criticism expressed by the US administration on the “provocative” expressions.

Erekat explained/justified this by saying, “President Mahmoud Abbas’ speech included six main issues. The first of them is condemnation of the genocide carried out by Israel on Gaza residents. We will not allow those responsible to escape punishment and will make sure that they will be tried in a court of law.”

In an interview with Israel Army Radio on Sept. 29, Erekat added: “Genocide is a direct attempt to eliminate, horrify, relocate, destroy a way of life.”

Abbas' so-called “beehive,” his inner circle [“Jama’at Abu Mazen” in Arabic], is made up of several senior PA officials, among them Yasser Abd Rabo, Majed Faraj (head of security) and Azzam al-Ahmed. Often senior Fatah official Hanan Ashrawi and Israeli Knesset member Ahmed Tibi provide advice to the chairman of the Palestinian Authority. But Erekat is the most dominant figure there. Lately he has escalated his pronouncements to a point that can be described as nothing short of incitement. Netanyahu’s UN speech, in which the prime minister compared the Islamic State to Hamas, also generated an exaggerated reaction on Erekat’s part.

“Netanyahu is trying to disseminate fear of the Islamic State, … but Netanyahu forgets that he himself leads the Jewish state,” said Erekat, adding, “He wants us to call Israel the Jewish state and supports terrorist settlers who kill, destroy and burn mosques and churches … like [IS leader Abu Bakr] Baghdadi’s men kill and terrorize.”

According to polls that were publicized at the Palestinian Authority (mainly after the Protective Edge campaign in Gaza), Abbas is not popular and does not have the support of Palestinian public opinion. The failed negotiations with Israel pushed Abbas into a corner and to total desperation. Now, it seems, he chooses to fight for his political life.

My colleague Daoud Kuttab wrote in Al-Monitor's Palestine Pulse that the authority’s chairman started a campaign to realize his very last chance to achieve Palestinian independence. Kuttab explained that Abbas chose to stop trying to please others, and instead worry about his own people first.

The man who chose a different path than the twisted road of predecessor Yasser Arafat, and a totally different route than the rival Hamas movement, did not succeed in convincing the Israelis of the veracity of his intentions. Thus, as far as he is concerned, Abbas is embarking on a new path, his last path — a diplomatic battle to persuade members of the UN Security Council to support the establishment of a Palestinian state and its acceptance into the various UN organs. Thus, he will also attempt to placate Palestinian public opinion, which demands indicting senior Israelis responsible for the “genocide,” (according to Abbas and his advisors).

But this new path of Abbas also does not guarantee success. In fact, Abbas has almost no chance of making it to the finish line after fulfilling his promises to his nation. The UN will not determine the borders of a Palestinian state and cannot force Israel to accept conditions for withdrawal and evacuation of settlements, certainly not to partition Jerusalem. The UN will not be able to grant Abbas a Palestinian state on a silver platter.

In Abbas’ desperate attempts to save his political life, he may very well inflict greater damage on himself and his nation. A UN failure to declare a Palestinian state will increase the pressures inflicted on him by his opponents to declare elections for the Palestinian Authority. Abbas was elected to his current position in January 2005 after Arafat's death. Since then, Abbas has avoided or prevented holding new elections for the position of Palestinian Authority president.

Criticism of Abbas in Palestinian public opinion does not only stem from the failure of his diplomatic negotiations with Israel and the resultant lack of hope. Instead, he is probably also unpopular because of the structure of his regime and the intimidation methods Abbas has used over his opponents and anyone who dares to threaten his position. One of the persons who took a political beating from Abbas this past year was Salam Fayyad, former prime minister and leader of the “Third Way” party. Fayyad resigned from his post in April 2013 against the background of troubled relations with the Authority chairman.

Recently [August 2014], members of the Palestinian Preventive Security Force raided the offices of the aid NGO Future for Palestine headed by Fayyad, on the excuse that the association was operating illegally. What they wanted to find out was whether the association had any future political intentions; in other words, whether would it threaten Abbas’ position as Authority chairman. Even Mustafa Barghouti, who is popular among many youths in the Authority, is harassed and stalked by Abbas’ close associates.

Abbas went to the UN General Assembly with this heavy baggage and with the goal of preserving his position and defeating his opponents. What he did accomplish with one single word was destroy the last remaining bridge that had survived all the storms that raged between the Israelis and Palestinians over the years.