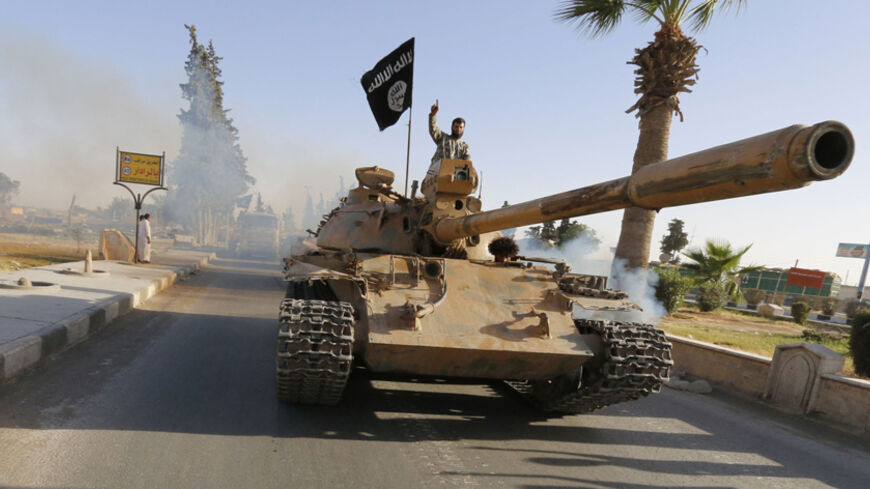 Militant Islamist fighters on a tank take part in a military parade along the streets of northern Raqqa province, June 30, 2014. - REUTERS

When Abu Bakr al-Baghadi, the Islamic State’s (IS) leader and self-styled caliph, appeared July 4 for the first time in Mosul, a symbolic venue was chosen by those who manage the media strategy of the world's most wanted terrorist group. Baghdadi chose the Great Mosque of al-Nouri, a Muslim prayer site built in 1172 by Noureddine Zangi, who's known to have paved the way for a strong Islamic state between Syria and Iraq and later expanded to Egypt and knocked down the Fatimid Dynasty. Zangi fought several battles against the Crusaders, vowing to liberate Jerusalem from their occupation. IS strategists played on this to try impose a comparison in the minds of those who are familiar with the mosque's history, to indicate what kind of state they are looking to build — one that can conquer the Shiite state Iran and one that is capable of fighting the West.

IS wanted to portray its caliph — who succeeds the Prophet Muhammad and represents God on earth — during the Friday sermon in July in the best way possible. From Baghdadi's outfit to the cameras used to broadcast the sermon, everything was planned to convey a message. Five high-definition cameras were placed inside and outside the mosque, all wired to a device operated by what appeared to be a professional technician, or maybe director, who created a professional 21-minute TV broadcast. This was IS’ image of statehood.

“The Islamic State believes that media warfare is equal in importance to military warfare,” Marwan Shehade, a Jordanian expert on Islamic movements, told Al-Monitor. “The media is essential when it comes to any of IS' activities; besides, they have been working on boosting their talents, especially with all the financial and human resources they acquired from around the Arab and Muslim world,” he said. According to Shehade, IS had the chance to equip itself with cutting-edge technology. “Analyzing the latest videos broadcast by the group shows that they have cutting-edge tools and professional operators. I have to say that they are generous when it comes to their media machine, and they pay good money to professionals.”

IS has several media divisions that produce and disseminate online media materials. Al-Furqan and Al-Itisam are responsible for the visual material: the first concentrates on the military warfare and showing the strength of the state, while the second is dedicated to social and religious activities and sermons.

“IS is an ideological group; therefore, they don’t trust the mainstream media to convey their messages,” Omar Kayed, a Palestinian journalist and academic who has been following IS from its beginning, told Al-Monitor. “The group depends mainly on its media divisions to spread its ideas and impose difficult conditions on journalists who desire to work in areas under its control. They have to vow allegiance to the group, [which has] full control over their materials and any violation of the rules might pose a threat to the journalists’ lives.”

The IS media division produced several series glorifying the group, its ideology and its fighters. In an episode from “Media Messages from the Land of Epic Battles,” large numbers of foreigners who take part in the war are portrayed. Another series, “Flames of War,” produced originally in English, shows IS fighters taking part in fierce battles — clearly a direct message to the West. Another video shows an old man praising Allah for fighting under the IS banner. The group also aims to show its human face by producing footage of friendly IS members distributing aid to people in need in areas within the state’s proclaimed borders.

“They also insist on showing the human side of their fighters in some of their videos, and smiles are [shown] wherever they occur. They want to say that those under their control are treated humanely, which is related to the Quranic verse that reads, ‘Muhammad, the messenger of Allah and those with him are forceful against the disbelievers, merciful among themselves,’” Kayed said.

The most well-known videos, however, are those showing the beheadings of “infidels” and “apostates” in the heart of the desert or during a battle, which are released as part of a wider media strategy, to reinforce IS’ image. “The group follows the Hanbali school of jurisprudence and embraces some ideas that are used as tactics whenever they are fighting, surrounding the enemy with fear and awe," Shehade said. "They adhere to one of the prophet's hadiths from during the early wars of Islam: ‘We came to you through slaughter,’ and another hadith that reads: ‘Allah made me victorious by awe, (by His frightening my enemies) for a distance of one month's journey.’ They work on solidifying the fighting doctrine within their ranks by altering and justifying it through the promise of paradise without accountability.”

Shehade added that this strategy proved successful, as “IS was able to win several battles without the need to fight in both Syria and Iraq. They believe it helps in their media warfare, which is true; they use it against all those who oppose them. The most interesting thing is that they use English whenever they want to address the West, and they don’t lack people with British and American accents to do the voice-over.”

IS even produced a game that resembles all aspects of its war against its enemies featuring similar terrain to areas the group is fighting in and audio that reflects its ideology. The game that Al-Monitor inspected is a modification of “Grand Theft Auto” and still has the original logo on it.

“These materials are essential for IS’ recruitment campaigns,” Kayed said. “It’s the best propaganda for their ideas.”