Protests erupted in Iraq following a decision to impose gender segregation in schools and universities. 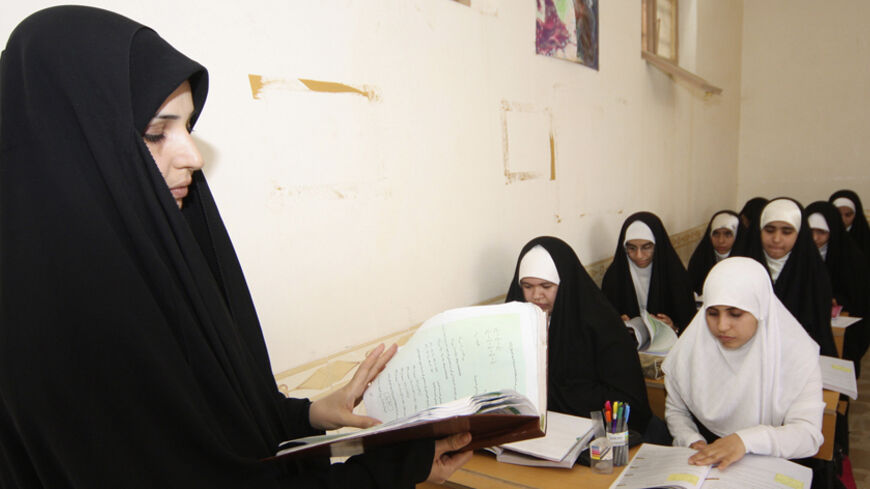 Students attend a class on the first day of the new school term in Karbala, 110 kilometers (68 miles) south of Baghdad, Sept. 24, 2013. - REUTERS/Mushtaq Muhammed

BAGHDAD — Dozens of students from Baghdad University took to the streets Oct. 16 to protest the establishment of an all-girls university and to demand that separation of the sexes be forbidden in Iraqi universities.

As religion seeps into every aspect of education in Iraq, art and sports classes are on the verge of disappearing, while religious education classes prevail. An escalating wave of religious extremism has been taking over Iraqi cities, especially the southern ones, where women ubiquitously wear the veil while civil freedoms are absent.

State institutions are encouraging religious parties and movements and even backing them in some cases. In 2012, for instance, security forces raided social hangouts in Baghdad.

The Iraqi government is not banning or deterring any radical religious practices, even though they clearly violate civil freedoms. It has forbidden university graduation ceremonies as well as New Year’s Eve celebrations in Baghdad and other cities.

Powerful parties in the Iraqi government imposed wearing a veil in Iraqi schools. Member of parliament Suzan al-Saad spearheads a campaign to distribute veils to young female scholars every year in Basra schools. Meanwhile, some clerics, including Bashir al-Najafi, a prominent Shiite religious authority, are openly demanding the integration of Shiism into the curriculum.

Religious extremism is seeping into the schools and universities of Baghdad.

Feminist activist Zeina al-Helfi told Al-Monitor that many schools in Baghdad are practicing extremism in their curricula and teaching methods. Zeina believes it is unlikely that such things happen without the knowledge of the Ministry of Education. In Doura School in the Baiyaa neighborhood in Baghdad, the education supervisors appointed by the Ministry of Education strictly impose conservative clothing on teachers and students, and adopt methods of intimidation, such as threats of dismissal or expulsion from the school. Zeina notes that Al-Ikhlas School in Baghdad also imposed the veil on all its students.

Although this phenomenon is widespread and people are complaining about it, the Ministry of Education denies its involvement and says that other reasons outside its control are at play. Speaking to Al-Monitor, Abdel Abbas Abdel Jassem, an expert on curricula development in the Directorate of Curricula in the Ministry of Education, said the presence of religious practices in Iraqi schools. “We heard that teachers in some Basra schools are imposing self-flagellation on students in class,” he said.

Self-flagellation is a Shiite ritual whereby the body is beaten to express grief for the murder of Imam Hussein, the third of the 12 Shiite imams. Jassem denied that the ministry had any hand in the school punishments. He noted that such phenomena stem from the prevalence of religious parties in some regions.

Despite objections to sectarian and religious curricula and to the limited arts and sports classes in Iraqi schools, Jassem still firmly defends the Iraqi curricula. He describes it as balanced in terms of tackling religious concepts that represent the various sects of Iraqi society.

He even went on to say, “They are the best educational curricula in the Middle East.”

However, he believes that the teachers are the problem. Jassem also voiced his concern regarding the big crisis that the Iraqi educational sector is facing. There is a huge need for teachers, as the current ones are few in number and have weak educational competence. He added that the country needs more teachers and higher competence. Jassem also noted that all forms of sectarian and religious extremism in Iraqi schools stem from the practices of incompetent teachers and supervisors, but again he denied any role for the ministry in these practices.

If the role of the Ministry of Education is ruled out in this issue, then this would imply that religious parties are so dominant that the ministry cannot stop them. On that note, Ahmad al-Sheikh, a professor of modern criticism at Baghdad University, told Al-Monitor that these instructions were not dictated by the Ministry of Education, but by the influence of religious parties in the country. He said these parties, whether Shiite or Sunni, have training programs for teachers to prepare them for religious teaching.

Sheikh told Al-Monitor that he had met with one of the teachers who received training in Iran to develop the skills of religious teaching and learn how to spread the culture of piety among scholars. Sheikh quoted the teacher as saying that Iraqi schools were being taken over by Shiite and Sunni waves. The religious parties of both sects are fighting to spread their religious culture in Iraqi schools, where each sect is practicing its activities in schools located in its areas of influence. Sheikh said Baghdad University was far from this polarization, as its administrative and faculty members were professional and competent, which called for optimism.

Facing this transfer of sectarian conflict to the educational sector threatens the system with collapse and turns it into religious teaching stuck in the middle of sectarian whims.

For this reason, the state and its education ministries — the Ministry of Education and Higher Education — have an important role to play. They must put forward a plan to rescue education from the abyss that it has fallen into. However, in reality, it seems that such plan is unlikely at the moment.

Based on the Ministry of Higher Education’s initiative, and with the approval of the Cabinet and parliament, the state put in place a plan to establish a private university for women in Baghdad to separate both sexes at the level of university education. It is a step that mimics the Iranian experience.

Women at Baghdad University have refused this plan, and Baghdad witnessed a protest staged by the students to demand abolishing the idea and refusing to separate the sexes in university education. The protesters opened a Facebook page to gather voices against it.

Iraqi society is characterized by openness and calls for it, while the parties and institutions are trying to impose religious extremism that is not line with the historical and civil nature of Iraqi society.