The weapons trade in Iraq has become widespread in light of the escalation of the war against the Islamic State, and an increasing number of Iraqis possess guns for personal use. 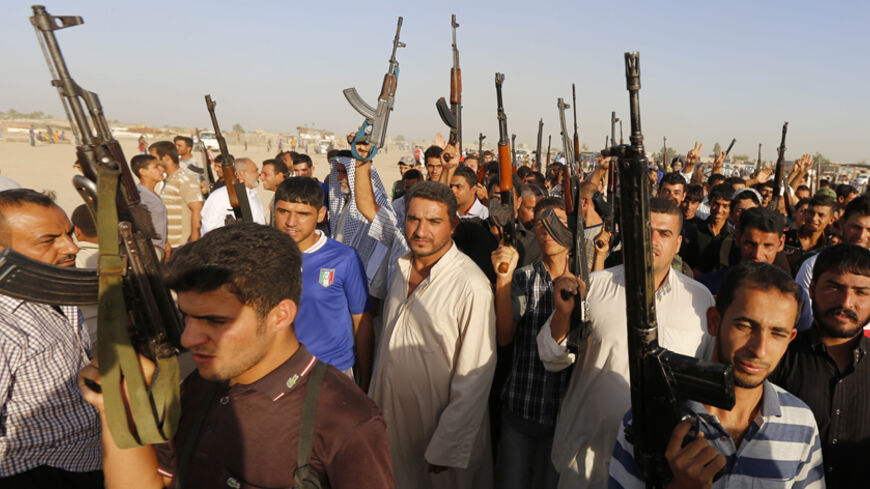 Volunteers who joined the Iraqi army to fight against the predominantly Sunni militants of the Islamic State carry weapons during a parade in the streets in Al-Fdhiliya district, eastern Baghdad, June 15, 2014.

This Facebook page consists of countless posts that promote the sale and purchase of various types of arms in Iraq.

The weapons trade in Iraq is thriving and has become a public affair due to widespread "social militarization” and the escalating war against the Islamic State (IS), which is now occupying extensive territories in northern and western Iraq.

A trader in Babil, a city located 100 kilometers (62 miles) south of Baghdad, and its surrounding regions told Al-Monitor on condition of anonymity that the price of weapons has risen. “The price of a Kalashnikov rifle, which is the most sought-after in Iraq, varies between $350 and $900, depending on its buttstock. The price of a two-handed Czech- or Romanian-made rifle ranges between $600 and $1,000," he said.

Abdel Amir Hasan who owns a shop in Hillah, the capital of Babil governorate, told Al-Monitor, “Most traders, if not all, have at least one gun [for personal use], which has become indispensable at work, in the car and at home. Some people including doctors and workers find a gun insufficient and possess a machine gun as well.”

Iraqi society has seen an increase in fighting against IS in particular and arms possession among civilians is common, as they no longer fear buying weapons, even the mid-range ones. Sheikh Mazen al-Kallabi, who is one of the prominent tribal sheikhs in Babil governorate, said in an interview with Al-Monitor, “Inhabitants of rural areas and tribal members are usually better armed than citydwellers. [Tribal members] mostly carry single-handed or two-handed guns.”

Kallabi, who bought a gun for $900, added, “Most [tribal members] own dozens of PKC machine guns and the security authorities are well aware of that.”

The media officer of the Human Rights Office of the United Nations Assistance Mission for Iraq, Jawad al-Shammari, told Al-Monitor over the phone, “Personal weapons can be found in every house in Iraq, as citizens feel an urgent need to protect themselves and their families from armed militias and thieves. Iraqis live in fear of their security day and night, and they have lost faith in the security institutions that are incapable of offering them complete protection.”

Amine Hassan, who is a volunteer in the war against IS, told Al-Monitor, while carrying his weapon and wearing a military uniform, “Many young men carry personal guns, while hunting rifles have become a must, as some of them go out hunting.”

Al-Monitor asked Abbas whether the Ministry of Interior kept track of the arms trade in Iraq, but it appeared that no official reports on the number of weapons sold and money exchanged is available.

Saad Hamid, a peasant, told Al-Monitor, “[I] bought a Prong gun worth $1,000, because I need it [during my] commute between the village and the city.”

Although citizens talk about the different types and prices of weapons, they insist that they have only heard of the illegal trade and are not involved themselves.

Karim al-Karadi, who works as a security guard in Baghdad and has extensive experience in the arms market, told Al-Monitor, “The prices of arms have surged in the past few months. For instance, the Kalashnikov rifle now sells at $1,000. But prices in Baghdad are at an entirely different level with new rifles costing around $2,600 and new guns around $1,200.”

As a direct result of the deteriorating security situation and the war against IS, Suheila Abbas, a member of Babil’s Municipal Council and social researcher, told Al-Monitor, “Iraqis consider arms in their homes essential because they make them feel safe. The homeowner cannot sleep peacefully without having a gun or machine gun [by his side]. Security concerns have increased since the rise of IS in large parts of the country. The negative phenomenon [of gun ownership] will cease to exist once people feel safe and once cross-border smuggling operations stop.”