Israel has started to provide facilities to the Gaza Strip, but many Palestinians see these efforts as a facade that changes little. 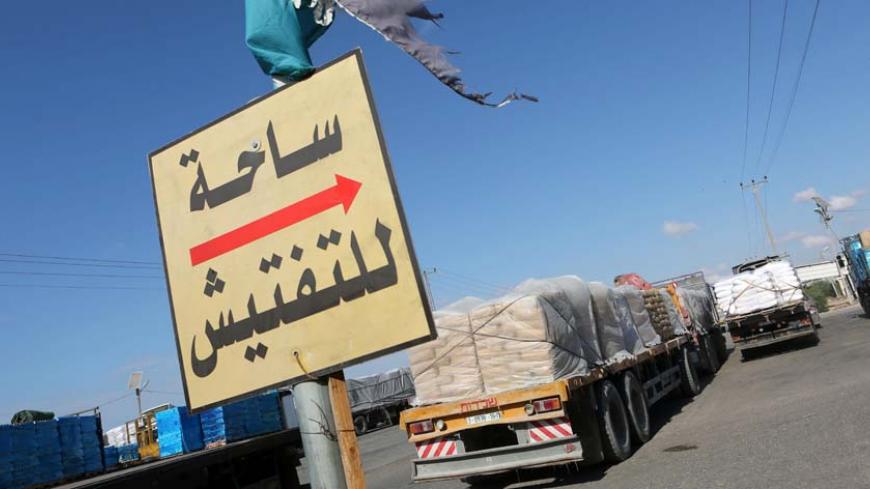 Trucks loaded with bags of cement enter the Gaza Strip from Israel through the Kerem Shalom crossing on Oct. 14, 2014, in Rafah in southern Gaza. - SAID KHATIB/AFP/Getty Images

GAZA CITY, Gaza Strip — Israel has granted Gaza some economic and humanitarian relief, a month after the most violent war it has waged during the eight-year siege. While this relief could be seen as signs of lifting the blockade on Gaza, it is only part of a UN-brokered agreement between the Palestinian Authority (PA) and Israel to start the reconstruction of Gaza and revive its economy, under security monitoring.

As part of the first stage of the UN-brokered deal between the PA and Israel to rebuild Gaza, the head of civil affairs in Ramallah, Hussein al-Sheikh, said on Sept. 19 that Israel has been providing economic and humanitarian facilities in stages.

According to Sheikh, they include alleviating restrictions on the entry of construction materials to Gaza; allowing the export of some of Gaza’s products; allowing students to attend universities in the West Bank; the reunion of families and increasing the freedom of businessmen to move between Gaza and the West Bank.

Israel also declared that it would allow 5,000 Palestinian workers from Gaza to work in nearby Israeli areas, after approving the names put forth by the Palestinian side, which would be compiled by the government of national unity.

This number of workers represents a fifth of the labor force that stopped working after Israel’s blockade on Gaza, following Hamas’ victory in the Palestinian legislative elections in 2006. Since the outbreak of the second intifada in 2000, the number of workers in Israel has gradually been reduced and reached about 25,000 workers in Gaza by 2006, which doesn’t include the 50,000 workers that were working illegally.

Palestinian factions believe that Israel’s gradual relief is nothing but an attempt to divide Palestinians and downplay the resistance in a new fashion, after the failure of the blockade and successive wars.

Yahya Moussa, a leader in Hamas, told Al-Monitor, “We haven’t yet seen any of the facilities provided by Israel. The occupation authority is lying and it is in charge of the Gaza Strip. It is not doing anything but taking arbitrary measures on the crossings, financial wires and freedom of movement. Israel is providing some facilities on one side, but on the other it is tightening restrictions.”

He also said that Israel announced these measures because it is now convinced that the policy of blockade is futile and not in response to any pressure from the United States or Arab countries. “Israel is not under any pressure. And if it were, which party is pressuring them exactly? The party that was its partner in the recent war, or was it the United States, the official sponsor of terrorism?” Moussa said.

Israeli authorities have also allowed citizens from Gaza to visit Jerusalem during Eid al-Adha after an eight-year ban, and ministers from the government of national unity to visit the Gaza Strip through a safe passage linking the Gaza Strip and the West Bank.

In an interview with Al-Monitor, Faisal Abu Shahla, a leader in Fatah in Gaza, denied the existence of any relief measures on the part of Israel on the ground. “The measures are vague. There are specific Palestinian demands and international pressure and a mechanism of work set by the UN. However, on the ground in Gaza, there are no significant changes and Israel has yet to implement serious measures in terms of facilities,” he said.

Abu Shahla said that allowing the government of national unity to enter Gaza or Gazans visiting Jerusalem must not be considered among the measures provided by Israel.

“Israel is trying to promote, in the media, measures that have not yet occurred. Allowing the government of national unity to visit Gaza or the visit of Gazans to Jerusalem is not something new. During holidays, Christians from Gaza visit the West Bank. Israel did not introduce anything new in Gaza with these so-called measures,” he said.

In the same vein, according to the UN-brokered deal between Israel and the PA, which was announced by Deputy Prime Minister Mohammed Mustafa, the PA should have taken control of the border crossing between the Gaza Strip and Israel on Oct. 12. However, this has yet to be implemented.

A leader in the Islamic Jihad, Khodr Habib, told Al-Monitor, “The Israeli measures are just for show and will not lead to the lifting of the blockade.” He said, “Lifting the blockade completely will need pressure from the United States.”

He added, "These measures have other [hidden] goals,” and that the Palestinians “have the right to be relieved of the blockade. We are certain that these measures are not in good faith but seek to undermine the support for the resistance. It is as if they are trying to say to Gazans that the resistance brings nothing but destruction, and calm could bring facilities and reconstruction.”

Habib said the United States has changed its position to achieve stability and reconstruction in Gaza because of the change in its priorities. “The United States has many hot issues to deal with in the region. It seeks to calm the Palestinian situation so it can have time to deal with its other regional issues. The US interests are in line with the Israelis, and the Palestinians will always opt for the choice of resistance as long as the occupation continues to exist,” he said.

Political analyst Hani al-Bassous said Israel has turned toward a policy to ”contain” the Gaza Strip after the failure of the blockade. It seeks to calm the security situation on the border with Gaza, and to delude the world into believing that it is a peaceful state and that the resistance factions are the ones who cause wars and violence. “Lifting the blockade on Gaza is not linked to Hamas handing over power — the main condition is to hand over the arms of the resistance,” he said.

According to Bassous, the lifting of the blockade is also linked to the return of the PA to govern Gaza. Meanwhile, the PA is complaining about governance under the shadow of Hamas in Gaza. He said, “There is also an undeclared agreement with Israel to remove the weapons of the resistance, which is further proven in the statement from the PA in Gaza confirming that the weapons of the security apparatus are the only legitimate arms.”

It seems that Hamas continues to sharpen its forces after the war, as it declared on the day the unity government visited Gaza for the first time that it opened the door for recruitment in the ranks of the Izz ad-Din al-Qassam Brigades, during the festival in the east of the Shajaiya neighborhood.