As Egypt gears up for parliamentary elections, many fear that former generals will be elected to consolidate President Abdel Fattah al-Sisi's power. 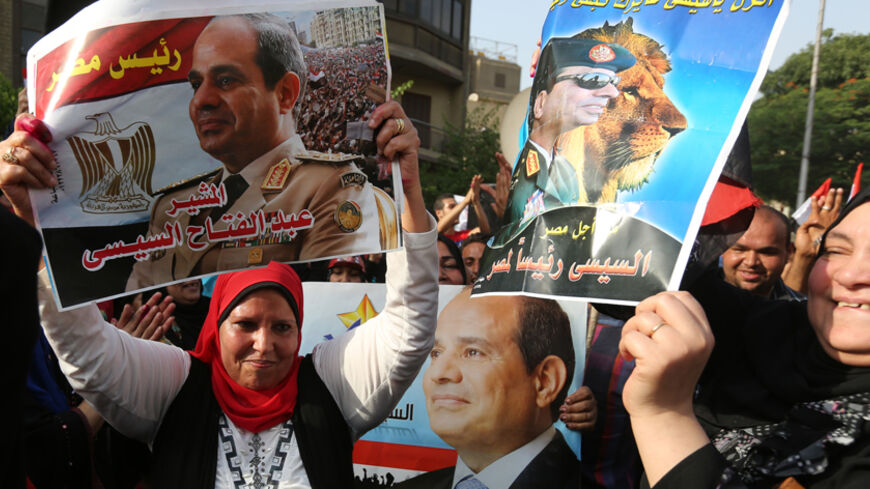 People celebrate in front of a polling station during the presidential elections in Cairo, May 26, 2014. - REUTERS/Mohamed Abd El Ghany

These generals had clearly sought political posts in the Egyptian presidential elections following the ouster of the Muslim Brotherhood regime. Yet they all backed down as an act of courtesy to Egypt’s President Gen. Abdel Fattah al-Sisi and preferred not to go against the tide.

Will these generals continue on their political paths and form a backup for Sisi in parliament, as the majority of them have declared? Or will they decide not to run at the last moment and leave the stage for the Islamists, where the Nour Party, the Salafist blocs and the remnants of the Muslim Brotherhood alliances bet that they will win the largest number of parliamentary seats?

This is especially important as Egyptian civil parties have failed to reach an agreement on a strong alliance able to form a majority in parliament, in addition to the president’s demands that elections be postponed out of fear of the Islamists’ return to the political scene. These demands were rejected by Sisi, who stressed that the infiltration of the Brotherhood in the next parliament will cause the parliament’s downfall.

Regarding the fear that the Islamists will win a majority of seats in parliament, given the confusion among the civil forces and of former generals, Ammar Ali Hassan, a researcher on Islamist movements, told Al-Monitor, “It depends on the way the electoral process is designed, which means the way the constituencies are distributed and whether or not civil forces are coherent and coordinate with each other. This will significantly affect the next electoral process, similarly to what happened in the previous parliamentary elections, where the Brotherhood and the Salafists coordinated with each other, which resulted in Islamists winning a majority of seats, while the civil forces fought with each other and received a minority.”

Hassan said the return of the Islamists to parliament also depends on the electoral system. He said that currently, “20% [of the seats] are determined by the [electoral] lists system, which will greatly define whether Islamist movements will be present in the next parliament, through lists in the constituencies, provinces or the republic. The remaining 80%, which are determined by the individual electoral system, will be greatly affected by money used for political purposes and the coordination between civil forces against Islamist movements. This is added to the fact that the tribal character of the upper-Egypt region and the Sinai Peninsula will greatly determine to what extent Islamist movements will dominate the next parliament.”

Hassan said the generals' chances of entering the next parliament were slim, as the nature of their work did not mesh well with the voters, unlike the civil movements. “It is nothing new that former army or police personnel run in elections after they’ve retired,” he said. “Yet, their chances of entering parliament are very slim, even during the years of fraud under the [Hosni] Mubarak regime.”

As for the civil forces, he said that given the president's great popularity, Sisi is expected to indirectly influence them during his speeches, which will be dramatically in favor of a particular alliance.

Nagy Al-Shihabi, chairman of the Democratic Generation Party, which is part of the Egyptian Front Coalition led by Ahmed Shafiq, told Al-Monitor that Islamist forces will be present in the next parliament. But he expected them to get a small number of seats — 10 at the most — as the Islamist movement, headed by the Brotherhood, the allied parties and Salafists, were losing influence in the street.

As for the rest of the military figures, he said, "Maj. Gen. Murad Muwafi withdrew from public life and has no activity at present. The call of Gen. Sami Annan does not have any influence in the street. The same applies to Gen. Hossam Khairallah, who does not have influential popularity in the Egyptian street.”

Margaret Azar, a former member of parliament and the former secretary-general of the Free Egyptians Party, said, “There are reports saying that Islamist forces will win a percentage of seats in the next parliament. Yet, it does not depend on the popularity of the Islamist movement, but is rather closely linked to their expertise in public and social work, and their provisions of direct services to the people in their constituencies, under the individual electoral system. Nevertheless, all of the speculation confirms that a particular category, be it civil or Islamist, will not get a majority. Rather, diversity will characterize the next parliament.”

She added, “The weakness of civil parties gives the impression that the electoral process will serve the interests of the Islamist movement, and the current electoral system does not depend on the parties’ lists, but rather on the individual. This makes it difficult to halt the infiltration of the Islamists into the next parliament, even after the popularity of the Brotherhood, its allies and the Nour Party has declined, although [the latter] was a supporter of the June 30 Revolution.”

Azar expressed her discontent at the recent statements by a number of civil parties and alliances led by military figures, that they desire to form a political backup for Sisi and pass his resolutions in parliament. She claimed that they are mistaken and that this will result in parliament losing its most important objective: standing with the voters.