In an interview with Al-Monitor, the spokesperson of Israel's Bnei Sakhnin soccer team explains that it honored former Knesset member Azmi Bishara because he facilitated Qatari financial support. 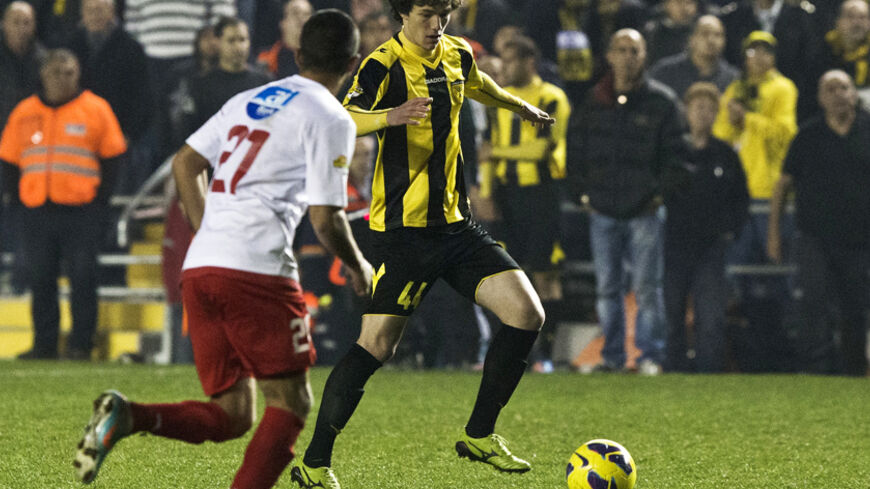 Beitar Jerusalem (in yellow and black jerseys) play against Bnei Sakhnin (in white jerseys) as part of the Israeli Premier League at Teddy Stadium in Jerusalem, Feb. 10, 2013. - REUTERS/Nir Elias

The Bnei Sakhnin soccer team rose to the Israeli National League in 2003 for the first time in its history, and in its very first season won the State Cup. Bnei Sakhnin games are usually full of tension. Its players, most of whom are Arab Israelis, are frequently subjected to nationalistic and racist slurs from the stands. This harassment peaks in charged and stormy games against the Beitar Jerusalem team.

Despite the weekly barrage of invectives, the team’s management has cultivated a positive public image for Bnei Sakhnin as a bridge between Jews and Arabs, a symbol of coexistence. It was not easy. The current chairman of the team, Mohammed Abu Yunes, has admitted that it is hard to bring Jewish players to Bnei Sakhnin. In fact, there are only two Jewish players on the team for the current 2014-2015 season.

Precisely because of its years of accumulated experience, it is puzzling that the team’s management was surprised Oct. 18 at the public storm over its decision to honor former Knesset member Azmi Bishara. There was a public ceremony just prior to a league game against Hapoel Tel Aviv for Bishara's help in obtaining a $2 million donation from the emir of Qatar.

The Qatari financial assistance to Bnei Sakhnin is nothing new. The team’s stadium, which was built in 2005 and named after the Qatari capital of Doha, was partly funded by Qatar. Last year, the Bnei Sakhnin team faced severe financial difficulties that threatened its future activities. Lacking significant assistance from any Israeli source, institutional or private, the Bnei Sakhnin management was forced to woo Qatar and once again receive a generous donation.

One of those who helped Bnei Sakhnin in its fundraising was Bishara — who is suspected of espionage for Hezbollah during the Second Lebanon War and had fled Israel to avoid arrest. For some reason, the team's leadership did not view any of this as problematic. It did not even try to hide the connection to the fugitive Knesset member and praised Bishara publicly.

The tribute ceremony to Bishara led to sharp criticism in Israel of Bnei Sakhnin. The management of the Israel Football Association decided to summon the team for a disciplinary hearing on two charges: unbecoming conduct and taking a stance on disputed political and public issues.

And as if that weren’t enough, Bnei Sakhnin was also criticized by the Arab public, including Sakhnin's residents, who claimed that the team’s management harmed the coexistence goals symbolized by the group.

Sakhnin Mayor Mazen Ghnaim, considered one of the founders of Bnei Sakhnin, headed the team until 2008. This week, he refrained from criticizing the team publicly. However, the town residents who spoke with Al-Monitor said they were furious about the tremendous damage inflicted on the team and on the public image of the city of Sakhnin.

"Personally, I decided not to react," Ghnaim told Al-Monitor. "I will only share my views behind closed doors, with the members of the management. Forgive me, but I do not want to express myself on this subject." He added, "I decided that the members of the team’s management would respond themselves on the issue. Not me."

Munder Khalaila, Bnei Sakhnin's spokesperson, spoke to Al-Monitor on the matter. An excerpt of the interview follows:

Khalaila:  The feelings of our Jewish brothers, who live with us here in the land and we live with them, are important to us. But on the other hand, we examine ourselves and we ask: What did we do? All we wanted was to thank a person who worked hard and went to great efforts to assure that the donation would actually be handed to us. We didn’t imagine that such a storm would ensue. We are not naive, but truly we didn’t anticipate this. We don’t want to hurt anyone; we want the strong, tremendous bridge of coexistence we have worked on for years to remain firm. On the other hand, we do expect a modicum of understanding for our economic distress.

Al-Monitor:  The problem is not the source of the money and not even about who brought the money, but about the tribute that was paid to Azmi Bishara, who is suspected of espionage.

Khalaila:  I understand your point of view and what is going on in your mind. I’m not oblivious to that.

Al-Monitor:  I also understand your distress and the hardships you have endured over the years, but don’t you realize that you crossed a red line?

Khalaila:  I want to believe that every entity, even us, becomes wiser with time and experience. I hope that we will emerge from this incident wiser.

Al-Monitor:  When you say “wiser,” does that mean you admit that you made a mistake?

Khalaila:  I didn’t say we made a mistake. We were in great financial distress. Am I personally acquainted with Qatari Prince Tamim al-Thani? How would I know him? We have no access to the prince, not me nor anyone else on the team. So we adopted the right approach and were helped by someone who does have access to the prince. Besides, we don’t assign scores to people. We don’t say who betrayed or who didn't betray or who was just suspected based on a rumor.