Racism in Israeli Sports Should End

After fans of Beitar Jerusalem's soccer team demonstrated against the signing of two Muslim players this week, Shlomi Eldar writes that such racism remains a problem in Israeli sports and society. 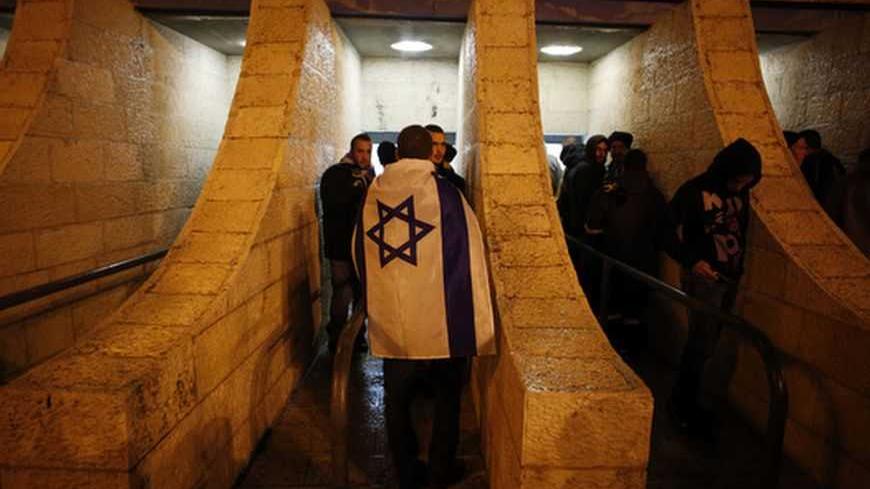 A supporter of Beitar Jerusalem enters the stadium before a soccer match against Maccabi Umm el-Fahm at Teddy Stadium in Jerusalem Jan. 29, 2013. - REUTERS/Baz Ratner

“The blacks have different colors too. There’s dark black and there’s mocha. The ones who are mocha are smarter. I mean the ones who are a little more mixed, like Andrew Kennedy, for example. You can see it in the way he holds himself, in his personality. He checks you out, and he’s smart too. The other blacks really are idiots. They’ll do whatever you tell them to, just like slaves. Tell them to do something, and they’ll do exactly that.”

This isn’t a quote from some eighteenth-century slave trader. It’s from a speech given by Pini Gershon, a former coach of the Maccabi Tel Aviv basketball team, to a group of managers in 2001. His audience burst out laughing, and Gershon apologized as soon as his words hit the press. Still, he never actually paid for his remarks in any tangible way, and kept coaching the team long considered Israel’s national basketball team.

Twelve years have passed since he made those miserable comments, and the racist attitudes that they reflected have only gotten more deeply entrenched in Israel’s sports culture. The most recent scandal erupted on the Beitar Jerusalem soccer field, where a group of fans roared their disapproval at the management’s plans, as yet unfulfilled, to sign two Muslim players from Chechnya.

By the way, it should be noted that the current management is doing a lot, if not enough, to combat racism, with General Manager Itzik Kornfein actually getting into a confrontation with some of the more extreme elements of his team’s fan base. At an earlier game, fans protested the decision from the stands by raising a conspicuous yellow banner that read, “Beitar, Forever Pure.” This aroused public fury throughout Israel, in both the Jewish and the Arab sectors. The very use of the word “pure” in this context touched one of the few raw nerves that can still shock and infuriate Israeli society. If there is one thing that Israelis of all stripes reject with utter repugnance, it is evoking the horrors of the Holocaust.

But until those fans actually borrowed a term from the “Aryan” lexicon, open displays of racism toward Arabs were ignored, for all intents and purposes. In some cases they even gained legitimacy from the silence of so many of the country’s leaders. Former prime minister Ehud Olmert, a longtime fan of Beitar, continued to attend the team’s games and never said a word about it. Only when this racism was painted in shades inspired by the Holocaust did Olmert announce that he would no longer be attending the team’s games.

Songs referencing the Holocaust have been heard more than once coming from the stands during HaPo’el Tel Aviv’s soccer and basketball games, too, mainly against their local rival, Maccabi Tel Aviv, and its management. The team was punished for this, but just as in the case of Beitar Jerusalem, it's hard to insist that management must exert full control over the hotheads.

It was only this week that everyone woke up to what was going on, after this ubiquitous racism reared its ugly head. The bad apples really were spoiling the bushel. President Shimon Peres condemned the phenomenon and expressed his “disgust,” while the media gave it extensive coverage. The topic of racism on the playing field made the transition from the sports section to the front page. Out of nowhere, retired police bigwigs like former commissioner Aryeh Amit went on radio and television to call for sending the Yasam (a SWAT team specializing in maintaining public order) into Beitar’s games to nip any rowdy provocations in the bud.

These bleeding hearts are suddenly voicing their revulsion. But where were they until now? Why have they traditionally responded to racist chants snarled at Arab players with a resounding silence? Where were they when the bus carrying the Bnei Sakhnin team was stoned, or when fans screamed, “Terrorist! Terrorist!” whenever an Arab player as much as touched the ball? That happened with more than one team, too. Where were you, and why didn’t any of you cancel your season tickets when fans started shouting “Death to the Arabs"?

Let’s ask it another way: How would ministers, police commissioners and the attorney-general react if, for instance, the crowd at Umm al-Fahm’s soccer field started shouting, “Kill the Jews"?

What would you suggest doing if each time a Jewish player in Nazareth touched the ball, the crowd started chanting, “Kike! Kike!”? Wouldn’t the SWAT team burst into the stadium and put an end to the game?

Everyone is awake now. It may have happened years too late, but once the Aryan connotations started to be heard, people realized that this wasn’t just a small group of hotheads that is ruining everything for Beitar. This is more than just a bunch of bad apples.

In the case of Pini Gershon, the response to his statement, quoted at the beginning of this article, was relatively tepid. It just focused on “the relationship between skin color and IQ,” even though this is an issue that left the world reeling over the past few decades. In the case of Beitar Jerusalem, it was a single word, “pure,” that roused sleeping demons and stirred memories better left alone. Suddenly the spotlight was focused on the anti-Arab racism that had become the team’s trademark.

But the painful fact is that Beitar is not alone. Yes, racism is raising its ugly head in Jerusalem’s Teddy Stadium, but you can also find it in Jaffa’s Bloomfield Stadium and in many other cities. Actually, racism and the hatred of Arabs are phenomena that afflict far too many people in Israeli society. And it all starts at the top, or in other words, in the Knesset, where it has become the norm.

It seems self-evident that “we do not form a coalition with the Arab parties.” We don’t even try to form a coalition with their external support. Consider, for instance, one of Yair Lapid’s first statements on election night: “We will not form a bloc with the Zoabis,” which can be more loosely expanded to, “with Knesset Member Haneen Zoabi and the other Arab Knesset Members.”

In response to this, Israel’s leadership must do more than just raise a red card. It must raise a black flag, too.