Does the US trust Turkey?

Turkey’s position in the struggle against the Islamic State will determine whether the West will treat it as a friend or a suspect. 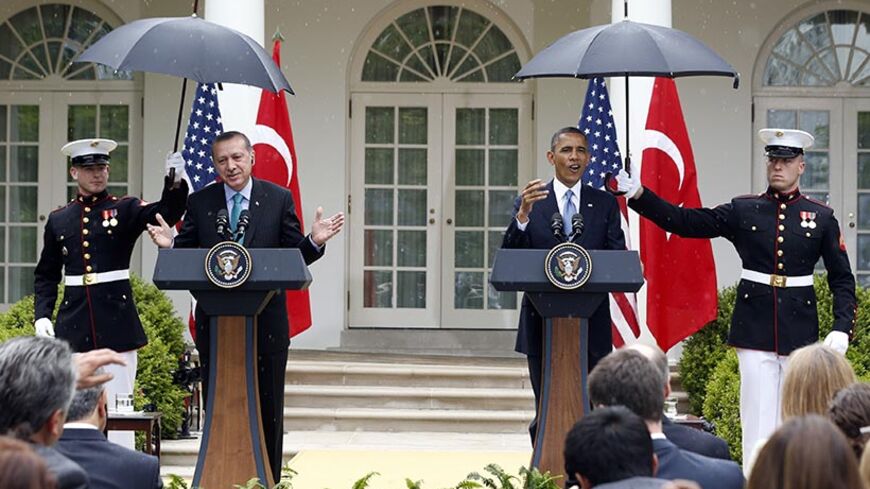 The German newspaper Der Spiegel has discovered that Turkey, a NATO ally, was the target of US, UK and German espionage. In its August 2014 report headlined, “A Two-Faced Friendship: Turkey Is ‘Partner and Target’ for the NSA,” Der Spiegel scrutinized hundreds of thousands of pages of National Security Agency (NSA) documents leaked by Edward Snowden​.

There was no German apology, but instead, a distinction between “friend and ally,” implying that Turkey is an ally but not a friend.

Der Spiegel reporter Michael Sontheimer told Elmas Topcu, a journalist of Turkish origin, in an interview: “We studied Edward Snowden’s archives and found 20 very important documents attesting to the cooperation between Turkish intelligence and the NSA. These documents showed that the NSA on the one hand supported the Turkish intelligence service MIT and the Turkish Armed Forces intensively in their combat against the PKK [Kurdistan Workers Party], and on the other hand how American intelligence units and Washington had no confidence whatsoever in the Turkish government. They [Americans] succeeded in monitoring Turkish government computers by trying every conceivable method.”

Sontheimer stated in the interview that the US administration does not trust Turkey at all. The original Der Spiegel piece stated: “The degree to which the NSA surveils its partner is made clear in the National Intelligence Priorities Framework (NIPF), a document establishing US intelligence priorities. Updated and presented to the president every six months, the NIPF shows a country’s ‘standing’ from the perspective of the United States. In the April 2013 edition, Turkey is listed as one of the countries most frequently targeted by Washington for surveillance, with US intelligence services tasked with collecting data in 19 different areas of interest.”

It continued with the following interesting information: “The document places Turkey at the level of Venezuela — and even ahead of Cuba — in terms of US interest in intelligence collection.”

Turkey’s Western allies do not trust the country's Islamist government, which does not conceal its pro-Muslim Brotherhood leanings. This mistrust was only aggravated by allegations that Turkey provided significant logistical support to the Islamic State (IS).

When IS made important advances in Iraq and Syria, the Turkish government came under unpublicized but apparent pressure from the United States and European governments to control its borders and not provide further assistance to IS. Ankara has sent signals that it is complying, however, because IS still holds 49 Turkish hostages, it remains uncertain whether the compliance would evolve into full-fledge cooperation. In a sense, IS has taken hostage Turkey’s Middle East policy.

The current NATO summit in Wales will indicate how Turkish-Western relations will be shaped from now on. President Barack Obama, on the eve of the summit, said the United States would expand cooperation with allies to render IS a "manageable problem."

In that, Turkey’s cooperation is essential. And, on the day of the NATO summit, it is not by chance that international media provided wide coverage to the news that Turkey was tightening its borders, and that IS is no longer easily crossing them. International news outlets also reported that Turkey’s new president, Recep Tayyip Erdogan, will meet Obama and British Prime Minister David Cameron in Wales.

This meeting will be an important international legitimization of Erdogan’s new status. Erdogan's past efforts to have a telephone conversation with Obama had fallen on deaf ears in Washington, demonstrating Washington's displeasure with the conduct of Turkey’s then-prime minister.

On Sept. 4, the day of the NATO summit, The Wall Street Journal, which has attracted Erdogan's wrath in the past, carried a story stating: “Turkey is struggling to close a 'jihadist highway' that lets foreign militants slip across its border into Syria, amid pressure from Western governments and mounting security fears at home. Turkish forces have stepped up arrests, patrols and interrogations in recent months, but the rapid advance of Islamic State extremists in Iraq has made Ankara's initiative even more urgent, say Turkish officials.”

Another influential Western daily, the Financial Times, also known for its critical approach to Erdogan, wrote on Sept. 3: “In the past, Turkey has been accused of turning a blind eye to the movement of ISIS [the former name of the Islamic State] and al-Qaeda-affiliated fighters across its borders, in part because of its eagerness to see the ousting of [Syrian President] Bashar al-Assad. But Turkish officials say they have clamped down on the militants and are looking for their allies to do more — particularly in terms of forwarding information on suspected foreign fighters who plan to travel through Turkey to Syria.”

Nonetheless, the Financial Times also underlined Turkey’s limitations in cooperating against IS. The FT report referred to an assessment by a Western diplomat: “‘Ankara is constrained in its actions and statements against ISIS by 49 Turkish hostages. … Turkey is under pressure to declare more visibly that it is working against ISIS, but it has a dilemma because of the 49 hostages and the danger of other blowback,' says a senior international diplomat. 'The measures at the border could be a case of closing the stable door after the horse has bolted. In these kinds of situations, you need to get things right at the beginning.’”

Renowned American diplomat Nicholas Burns wrote in an Aug. 31 Financial Times opinion piece that there were “three critical tests” that NATO leaders would confront during the NATO summit, including the problems in Ukraine, the Middle East and Afghanistan. He wrote, “Obama will need to convince a prickly Recep Tayyip Erdogan to close his border to the export of ISIS-controlled oil.” For him, the “three critical tests” may make this among the "most consequential summits in NATO's 65-year history."

Following the summit, US Secretary of Defense Chuck Hagel will go to Turkey to discuss the modes of cooperation and operational issues against IS. “Turkey has a stake here. We understand that. It’s an important partner in the region, a NATO ally,” said Pentagon spokesman Rear Adm. John Kirby, on Sept. 2. “The Turkish government has concerns about foreign fighters, and right they should, and we’re going there next week. I have no doubt this will be a topic of discussion between Secretary Hagel and his counterpart.”

Apart from Turkey’s limitations in cooperation — as well as its current leadership’s ideological limitations, meaning, adhering to Sunni Islamism in a period of sectarian cleavages — it remains to be seen how the Western alliance will move against IS, which has proclaimed a caliphate in parts of Syria. The new Turkish leadership's margins of pragmatism will also be tested in the wake of the NATO summit in Wales.

In the fight against IS, the Western world will see whether Turkey will be promoted from ally to friend, or if it will remain an intelligence target.