Given Turkey's reluctance, what will be the chances of success for the "coalition" against the Islamic State? 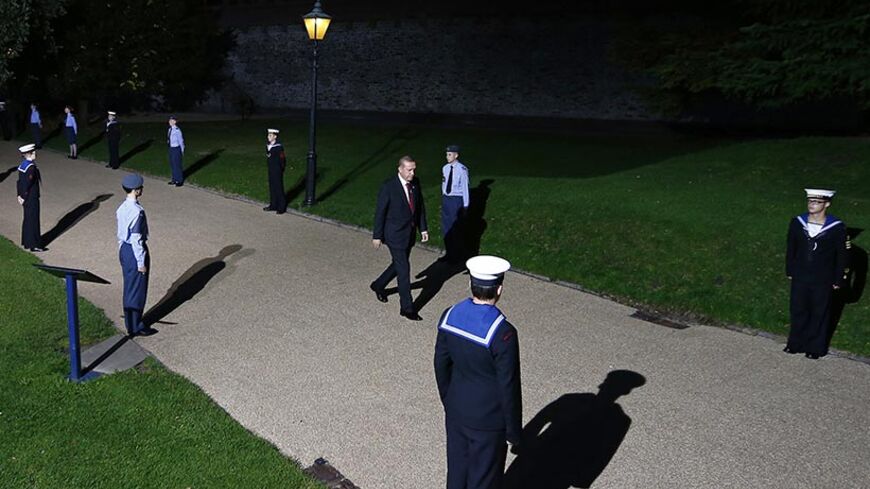 “In the fight against ISIS, the Western world will be able to see whether Turkey will be promoted from an ally to a friend or to be kept, still, as an intelligence target,” I concluded in my Al-Monitor article on Sept. 4, at the start of the NATO summit in Wales.

In the wake of the summit, how Turkey will act in terms of the coalition that US President Barack Obama promised to form is still unclear. Despite being a NATO ally, Turkey is not counted on as a backbone or a staunch member of such a coalition, given its closeness to the Islamic State (IS) that has been prioritized as a target by the Wales summit and by the US administration.

After the summit, Obama responded on NBC's "Meet the Press" to questions in a comprehensive interview with Chuck Todd on the conclusions of the summit. He was unequivocal on the issue of IS and said:

“Unless we have people we can work with who are Sunni in these Sunni regions, then we're going to continue to have these problems. And […] the strategy both for Iraq and for Syria is that we will hunt down [IS] members and assets wherever they are. … But in terms of controlling territory, we're going to have to develop a moderate Sunni opposition that can control territory and that we can work with. The notion that the United States should be putting boots on the ground, I think would be a profound mistake. And I want to be very clear and very explicit about that.”

In his response to Todd’s question, “I got a somewhat snarky email […] from a casual viewer who said, 'The United States gives a lotta military aid to Saudi Arabia. It's about time they use it.' What do you say to that?” Obama responded, “Well, I think that it is absolutely true that we're going to need Sunni states to step up, not just Saudi Arabia, our partners like Jordan, the United Arab Emirates, Turkey. They need to be involved. This is their neighborhood. The dangers that are posed […] are more directed at them right now than they are [at] us. … Sunni extremism, as represented by [IS], is the biggest danger that they face right now. And with that understanding, it gives us the capacity for them to start getting more active and more involved. And by the way, some of that's military. But some of it is giving political support to Baghdad and strengthening relations with [Shiite] leaders in Baghdad. … The question is, when are the moderate Sunni states and leadership going to work systematically to say, 'What [IS] represents isn’t Islam.' It is an abortion — a distortion — an abomination of that … somehow tied Islam to the kind of nihilistic thinking that any civilized nation should eliminate.”

This is where Turkey and the United States are not on the same page. Differences were revealed right after the 80-minute meeting between Obama and Turkish President Recep Tayyip Erdogan — their first since the May 2013 meeting at the White House. Since then, allegedly, a great deal of bitterness has transpired between the two, despite previously having enjoyed a close relationship.

Erdogan, after his meeting with Obama, underlined specifically the “model partnership” between the two countries, a concept coined during Obama’s visit to Turkey in April 2009. That concept has never been referred to by the US side, apparently unhappy with Erdogan, particularly since the summer of 2013.

After the encounter between Obama and Erdogan in Wales, the US side not only omitted any reference to the “model partnership,” but on the contrary the meeting was defined in a way that might signal a critical stance vis-a-vis Erdogan.

“In a pointed summary, the White House said that at a meeting at the NATO summit on Friday, US President Barack Obama discussed with Mr Erdogan 'the importance of building tolerant and inclusive societies and combating the scourge of anti-Semitism.'”

It appears that, for the Americans, Obama used his meeting with Erdogan as an opportunity to raise the displeasure of Washington with Erdogan’s recent statements and his domestic policy.

Needless to say, if Obama would find an enthusiastic NATO ally in his quest to construct a coalition to deal with IS, his attitude toward his Turkish counterpart might be different. Yet, Turkey’s reluctance in taking part in the efforts led by the United States against IS is also confirmed by Turkey’s media outlets following the Erdogan-Obama meeting.

Sources close to Erdogan and who were in Wales reflected on the Erdogan-Obama meeting by emphasizing that Erdogan objected Obama’s idea of assistance to Baghdad with arms delivery in the context of the struggle against IS.

The following is an excerpt of the news that demonstrates the way the Turkish media outlets close to Erdogan interpreted the meeting, relying on the information received from the “horse’s mouth.”

"Erdogan stressed to Obama that Turkey opposes the idea of the coalition of the willing supplying weapons to the government in Baghad, because that could provoke sectarian clashes. Erdogan said, Turkey does not favor the idea of a coalition of the willing for Iraq. It should not be a coalition, but an alliance. Such a coalition should not provide weapons to the Baghdad central government. The weapons that were provided before are now in the hands of [IS]. Having uncontrolled weaponry will endanger our domestic process and delay the solution process. The formation of an anti-[IS] should not reinforce [Syrian President Bashar al-] Assad. Because of the coalition and its actions our citizens held in the hands of [IS] could be harmed. We don’t want our people to be killed like the US journalists. We hope you will understand us.”

Turkey’s prominent daily Hurriyet’s Washington correspondent Tolga Tanis wrote a detailed assessment, apparently relying on the information provided by US sources in the US capital, under the title, “Differences between Washington and Ankara.” He drew attention to the fact that “US President Barack Obama held a press conference in Wales after he met with Turkey’s President Recep Tayyip Erdogan. Out of the four questions asked, two of them were about the Islamic State of Iraq and the Levant (ISIL). Turkey was not even mentioned once. Not only because of Ankara’s reluctance to appear on the frontlines of a struggle against ISIL, but it is also because of the differences …” Tanis arrived at a rather gloomy conclusion:

“While the danger of ISIL is growing, we are entering a very different phase. The Turkish-US relationship may undergo a very painful period, the first signs of which have appeared this week, as expected.”

This week, US Secretary of Defense Chuck Hagel will visit Ankara to discuss the cooperation against IS. The New York Times reported on Sept. 8: “The talks between Mr. Hagel and the Turkish leadership may be crucial in determining whether the United States will be able to count on Ankara on a number of fronts, including closing the Turkish border to foreign fighters who have been using Turkey as a transit point from which to go to Syria and Iraq to join militant organizations and allowing the American military to carry out operations from bases in Turkey.”

Most probably, the US side, when it comes to fighting against IS, finds once more that Turkey is a reluctant ally.

With such a reluctant ally, what will be the chances of success for the "coalition" against IS, and how will that affect the duration of the struggle against the “caliphate state," which emerged in the vast territories of Syra and Iraq?