Erdogan will try to pull off balancing act at NATO summit

President Recep Tayyip Erdogan is expected to be a media focal point during the NATO summit, where Turkey will find itself in a difficult position as a country both directly affected by the crises on the agenda and reluctant to take any decisive action. 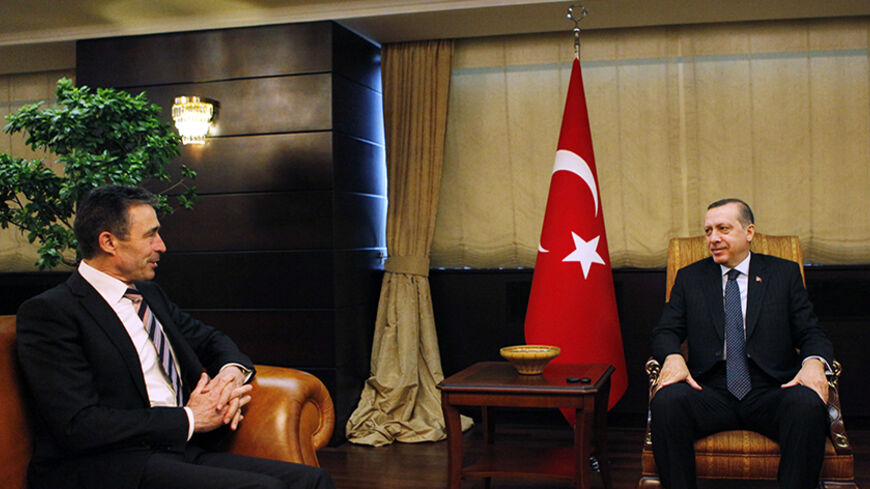 Recep Tayyip Erdogan will make his international debut as president in the West this week when he attends the NATO summit in Newport, Wales.

Despite the low turnout from the United States and Europe for his Aug. 28 inauguration, Erdogan is expected to be a point of attraction for the media during the Sept. 4-5 summit. He has earned an international reputation as an abrasive leader, frequently using anti-Western rhetoric to shore up domestic support.

The leaders Erdogan plans to meet on the sidelines of the summit — including US President Barack Obama — are nevertheless aware of Turkey’s geostrategic importance, especially in view of developments in Ukraine, Iraq and Syria expected to dominate the talks in Newport.

The United States has signaled that it wants an international coalition against the Islamic State (IS) in Iraq and Syria, while Europe and Washington are seeking to establish a unified front against Russia to counter Moscow’s military action in Ukraine.

These topics are of close interest to Ankara, which is warily watching as the crisis to its immediate north in Ukraine grows, and is concerned over advances by IS in areas adjoining Turkey’s southern borders, as its key Western allies start taking direct military action against the group.

Ankara is also unhappy about the decision by Western countries to arm the Iraqi Kurdish peshmerga against IS. These developments leave Turkey in an uneasy position, given its reluctance to take military action against IS, which has been holding Turkey’s consul general from Mosul and 48 other Turks, including security personnel and dependents at the consulate, hostage since June.

Ankara is also reluctant to anger Moscow by acting against Russia with the West. It is not clear, however, to what extent Turkey can set itself apart from its allies as a NATO member.

US Secretary of State John Kerry spelled out Washington’s intentions with regard to IS in an Aug. 30 opinion piece for The New York Times. Echoing similar remarks by Obama, Kerry referred to the group as a “cancer” and said that IS could be prevented from spreading to other countries if the broadest possible coalition led by the United States is established against it.

He named Turkey among the countries threatened by the group, and added that he and Defense Secretary Chuck Hagel would meet with NATO counterparts in Newport to “enlist the broadest possible assistance.” Later in the week, Hagel is scheduled to visit Turkey to further discuss the matter.

NATO Secretary-General Anders Fogh Rasmussen also weighed in before the summit and indicated that the alliance would agree on a “Readiness Action Plan” in response to “Russia’s aggressive behavior” in Ukraine. He added that the plan also “equips the alliance to respond to all security challenges, wherever they may arise.”

Referring to a “spearhead force” to be deployed on very short notice, Rasmussen said this “would be provided by allies in rotation, and will require reception facilities on NATO territory and pre-positioned equipment and supplies, command and control and logistics experts.”

Rasmussen’s remarks are of particular interest to Ankara given that the proximity of the crises to Turkey, which also plays host to essential US/NATO facilities, most notably at the Incirlik air base near Adana and the early warning radar station in Kurecik, Malatya.

Turkey was one of five allied countries that agreed to deploy the advanced radar system against ballistic missiles in 2012, a move that angered Russia and Iran. These countries continue to see a threat to their security with this deployment, even though NATO and Ankara insist it is purely defensive. Both countries have threatened to hit the radar facility if the need arises.

Ironically, the deployment of the radar system — a move that remains highly unpopular among Turks — came at a time when Erdogan was using anti-Western rhetoric for domestic political purposes.

Despite Erdogan’s rhetoric, the deployment showed Turkey’s vital geostrategic position for the West, as well as the importance Ankara continues to place in its NATO membership and its dependence on the alliance for security.

A similar, albeit uneasy, compliance on the part of Ankara can be expected if and when it is called on to provide support to NATO’s “spearhead force” announced by Rasmussen. This does not mean, however, that Ankara will be keen to parade this support, given the widespread anti-Western and anti-NATO sentiment among Turks.

It will also try to downplay its support so as not to anger Moscow further. The two countries exchanged some minor barbs after Russia annexed the Crimea, but Ankara has not supported Western sanctions against Moscow, even hoping to benefit from them economically by increasing its trade with Russia.

Erdogan as well as Foreign Minister Mevlut Cavusoglu and Defense Minister Ismet Yilmaz, who will accompany Erdogan at the two-day NATO summit, clearly have a delicate balancing act to do in Newport.

The headlines in Turkey are currently dominated by domestic issues, and the revelation that the US National Security Agency and its British and German counterparts had spied on Turkey for years. There has, on the other hand, been almost no coverage at all about the NATO summit. This will work to Erdogan’s advantage.

By giving the impression that he took to task the leaders of countries that reportedly spied on Turkey, Erdogan can, with the aid of amenable domestic media outlets, divert attention from the much more controversial issues at Newport. Erdogan and the pro-government media have already laid the groundwork for this.

Ankara’s reluctance to enter a military coalition against IS, however, is much more clear. One concern is that cooperating with the United States, United Kingdom, Iran or any other power against IS will endanger the lives of the Turkish hostages being held by the group.

A more significant reason behind Turkey’s reluctance, however, lies in the Kurdish issue. Ankara has good ties with the Kurdish Regional Government (KRG) in northern Iraq and peace talks are ongoing with the Kurdistan Workers Party (PKK), which the Turkish military has been fighting since the mid-1980s.

The idea of an independent Kurdistan adjacent to Turkey — given Turkey’s large and restive Kurdish minority — and any development that empowers the Kurds nevertheless remains a highly sensitive topic for nationalist Turks as well as the Turkish military.

Tellingly, Gen. Necdet Ozel, the chief of the Turkish General Staff, told reporters in Ankara recently that the military is not privy to the talks with the PKK and is following developments through the news media.

The fact that the PKK is fighting IS together with the Kurdish peshmerga is also fueling concerns about the decision by Western countries to arm the Iraqi Kurds. The worry is that these arms will fall into PKK hands and be used against the Turkish military.

Fuad Hussein, a senior member of the KRG, was quoted recently in the Turkish media as telling the Kurdish Rudaw TV that he traveled to Turkey secretly on Aug. 2 to ask for arms against IS but was refused. Hussein said Turkish officials had cited the Turkish hostages being held by IS and the Aug.10 presidential elections as justification for the refusal. The bottom line nevertheless is that Turkey is unlikely to arm the peshmerga, and does not actually have to now that others are doing it.

Turkey is also unlikely to join any US-led military coalition against IS — although it may cooperate in other ways — to shield itself from attacks by the group, whose members appear to be able to enter and exit Turkey freely, and who clearly have sympathizers in the country.