With Temple Mount as flashpoint, violence rises in Jerusalem

In the midst of increasing violence and harassment against Arabs in Jerusalem and tensions over the Temple Mount, the Jerusalem Municipality announced encouraging news about two building plans in East Jerusalem Arab neighborhoods. 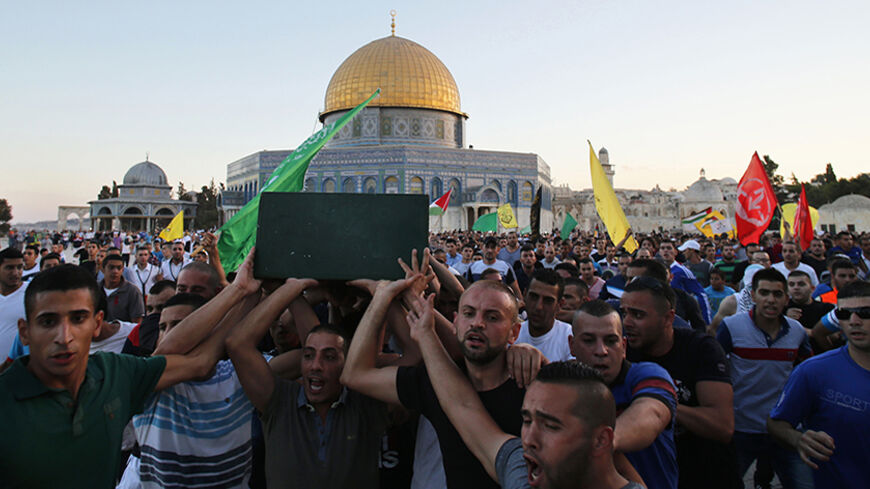 Palestinians carry the coffin of Mohammed Sinokrot during his funeral in front of the Dome of the Rock, on the compound known to Muslims as Noble Sanctuary and to Jews as Temple Mount, in Jerusalem's Old City, Sept. 8, 2014. - REUTERS/Ammar Awad

Hatred and nationalism have been seething in Jerusalem since three Israeli teens were slain on the outskirts of Hebron, and even more so during their funeral procession and following the killing of Palestinian youth Mohammed Abu Khdeir in East Jerusalem's Shuafat neighborhood.

Even as the United States mobilizes a broad Shiite-Sunni coalition against the fanatical Islamic State, the third most important city to Muslims has become a playing field for religious extremists and nationalists from both sides. One side — with the encouragement of government and right-wing legislators — aspires to deepen Jewish hegemony over the city, while the other responds with fire bombs, fueled by growing despair and distress.

The stalemate in the diplomatic process and what is perceived as a victory for Hamas and for the armed resistance in the most recent military conflict in Gaza are convincing more and more Palestinians that violence is the only way out. They are taking their anger out on Jews who have settled in the heart of Palestinian neighborhoods around the Old City of Jerusalem.

A 16-year-old Palestinian youth died Sept. 7 after being severely wounded by a rubber-coated bullet in an Aug. 31 confrontation between stone throwers and police. In recent weeks, sticks and stones attacks against Arab passers-by on the West Jerusalem streets, attempted stabbings and spraying of tear gas in their faces are also on the rise. Firebombs have been hurled at Palestinian homes and Jewish passengers forcibly removed from Arab cabs.

Aviv Tatarsky, a researcher for the nongovernmental organization Ir Amim, has documented dozens of attacks, and Al-Monitor has additional testimony of victims who refrained from lodging police complaints. In recent weeks, many of those who were attacked reported disparaging attitudes on the part of police and of the police actually abetting their harassment.

Unlike the complaints about law enforcement's lax responses by to such incidents, in July and August the police arrested 740 Palestinians, a few of them minors dragged out of their beds in the middle of the night. Police handed down 246 indictments on charges of participating in incidents in which 107 police officers were injured. Jerusalem police chief Yossi Parienti boasted to members of the Knesset’s Interior Affairs Committee who toured East Jerusalem recently that the number of arrests was hundreds of times greater than in any other police district during the same period.

If this is not enough to turn Jerusalem into the violence capital of Israel, two weeks ago the city council approved construction of a campus for the nationalist Or Sameach in the heart of the predominantly Palestinian Sheikh Jarrah neighborhood. Construction of the rabbinical college will contribute to the blurring of the Green Line. In diplomatic contacts, and even in talks between former Prime Minister Ehud Olmert and Palestinian Authority President Mahmoud Abbas, the land was designated for construction of the main border terminal between the capital of Israel and the capital of Palestine.

Given that the city of Jerusalem is a powder keg, it would not be an exaggeration to describe the Temple Mount as an active volcano. That site reflects the deep gaps of consciousness between the Jewish and Arab collectives living in the area. Many Jews know very little about what goes on at the site, which is holy to Jews and Muslims, except what is reported occasionally about restrictions imposed on praying there. On the other hand, the Palestinian media report day and night about a “violation of the status quo,” or in other words, a declaration of war by the Jews on the holy places of Islam. A position paper by Ir Amim researcher Tatarsky in July confirms that claim.

Palestinian friends and colleagues told Al-Monitor that they've heard a move is afoot to turn the Temple Mount (Haram al-Sharif) from a Muslim place of prayer into a joint prayer site for believers of both faiths, repeating the transformation that took place at the Tomb of the Patriarchs (al-Ibrahimi Mosque) in Hebron. Their concern is based, among other things, on a series of moves made recently by the Israel police. At the end of June, police issued dozens of Palestinians with restraining orders barring them from the area for four months, claiming the move was needed to prevent “serious damage to persons or property.” During Ramadan (this year in July), police restricted Friday prayers to those 50 and older.

Muslims ears are attuned to the declarations of radical Jewish elements like Yehuda Glick of the Temple Mount Heritage foundation and Bentzi Gupstein, who proclaimed, “The Muslims will soon get out and we will build the temple.”

Such talk could be dismissed as the ravings of fringe right-wingers, but it's hard to ignore when a member of the Israeli Cabinet wishes, “With God’s help, in another decade we will stand at the foot of the temple.” The speaker is Housing Minister Uri Ariel, who told Channel 2 television in July, “Here [at the site of the Dome of the Rock] I would like to see the temple. I hope I will live to see it.”

Amid this disturbing news, one can find consolation in two recent events. First, at the beginning of the month, the Local Planning and Construction Committee of the Jerusalem Municipality approved new plans for the Palestinian neighborhood of Arab al-Sawahra. These will enable the construction of 2,200 new housing units, a project unprecedented in scope since Israel annexed East Jerusalem in 1967. In the second event, last week the National Planning and Construction Board decided to freeze a previous decision to create a national park on the slopes of Mount Scopus. Freezing the original plan paves the way for the expansion of the Palestinian neighborhoods of Issawiyah and al-Tur.

One can hope that these important steps signal a merging of common sense and tolerance in the holy city in the face of the cursed alliance between religious fanaticism and lunatic nationalism.