Saad Hariri's return to Lebanon coincided with a rapprochement between Iran and Saudi Arabia, and appears to be part of Riyadh's plan to invest in fighting terrorism and promoting moderate Islam. 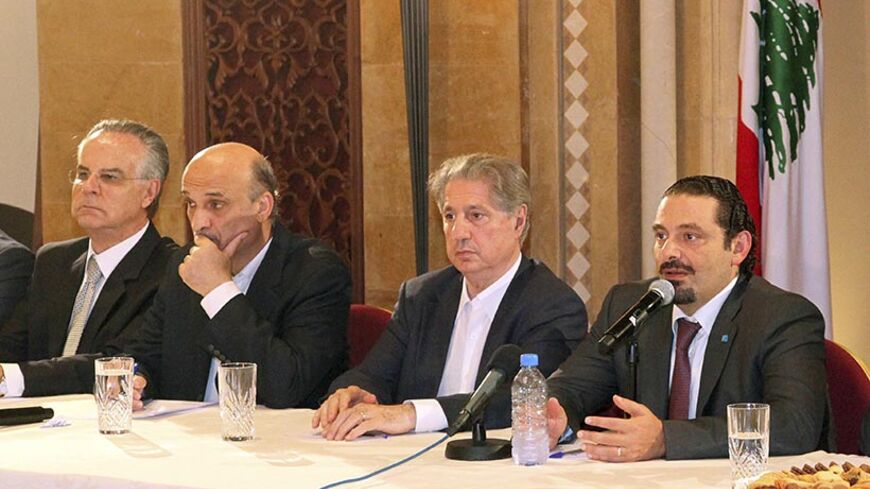 Saad Hariri’s return to Lebanon after a forced absence surprised Lebanon and the rest of the Arab world. It is significant in several ways and comes with wishes attached.

On the one hand, Hariri's visit coincides with the apparent development of a Saudi-Iranian rapprochement, which, if it lasts, could lead to a decrease in tensions in Syria, Yemen and Iraq. On the other hand, the political deadlock and deteriorating social and economic crises in Lebanon — and accompanying distress — have led many people to hang their hopes for Lebanon on Hariri's return, to which they lend many interpretations.

Some believe Hariri's presence could mean a coming push to elect a president, thus filling a seat that has been vacant for four months. Others see in his visit the potential for a revivial of economic activity, which has been chronically stagnant, given that Hariri’s name is linked to reconstruction and that he has had a positive influence in business circles.

Such speculation reflects the aspirations and needs of the Lebanese, but they remain wishes only, as they do not rest on solid political ground. The Saudi-Iranian rapprochement is still very young and might not extend beyond a circumstantial convergence of current mutual interest, namely, confronting the Islamic State (IS) and its threat to both parties.

Hariri returned to Beirut in the wake of a Saudi decision to donate $1 billion to the Lebanese army to support it in countering terrorism. Hariri was tasked with supervising spending for the effort. The Saudi's decision came at a critical moment, not only for Lebanon — with the Lebanese army battling jihadists in Arsal, close to the border with Syria — but also for Iraq.

Commenting on the timing of Hariri's return, a source close to him told Al-Monitor, “It was not a coincidence that Hariri headed to Beirut on the same day that US military forces started their air raids on the northern Iraqi regions to deter the advancement of jihadists after they had reached the regions close to Kurdish Erbil.” The source also pointed to another set of dates to connect events, stating, “Hariri returned on Aug. 8, and a few days later, on Aug. 13, Saudi Arabia decided to give the United Nation $100 million to fight terrorism.” The source was seemingly confirming Saudi Arabia’s firm resolve to fight terrorism and spend money toward that purpose.

The Saudis' actions, however, not only entail investing money to fight terrorism, but go beyond that to a more symbolic step in its blessing of Hariri’s return and tasking him with spending and supervising its financial assistance. It is no longer a secret that Saudi Arabia’s support for Hariri, leader of the Future Movement, had led Riyadh for the past three years to work around his not returning to Lebanon, to ensure his safety. It blessed his return at this critical moment to reaffirm its commitment to fight terrorism in word and deed and to further show that it has a strategy invested in this purpose.

Hariri has become the symbol of moderation since his return, which could be dubbed the “Return of Moderation.” Since Aug. 8, this phrase has been repeated by March 14 politicians and has even appeared on posters in Beirut’s streets welcoming the returning leader. The sloganeering is of significance on several fronts given that sectarian strife is raging across the Middle East, including with jihadist groups beheading people and attempting to annihilate minorities in the name of religion.

While the moment is being characterized by moderation — which is Lebanese in shape and enjoys the blessing of Saudi Arabia — extremism remains the vice that must be uprooted. For this reason, in conjunction with the “return of moderation,” it was announced on Aug. 7 that a conference on fighting radicalism will be held in Saudi Arabia in mid-2015, with the participation of 20 countries.

King Abdullah bin Abdulaziz gave an overview of the plan in an Aug. 1 letter to leaders and scholars of the Islamic world. Meanwhile, an openness to Iran has bloomed, as indicated by an Aug. 26 visit of Iranian Deputy Foreign Minister Hussein Amir Abdel Lahyan to the kingdom. Obviously, Hariri’s return to Beirut is also part of the Saudi plan to fight terrorism and radicalism.

The source close to Hariri concluded, “Saudi Arabia is sending a message that this phase’s slogan is 'moderate Islam.' It overcame sectarian and religious boundaries and decided to support the Lebanese army and international organizations like the UN, rather than religious groups. At the same time, it is open to dialogue with Iran, based on strategic interests, despite the persistent conflict between them over several issues. These include the stance regarding the regime in Syria and Egypt and policies in Yemen and Iraq.”

Where Iranian and Saudi interests converge today is in the fight against IS. This constitutes the foundation for forming a Lebanese government and assuring the security of this small country. This is the backdrop against which Hariri returned to Lebanon.

The Future Movement has benefited from the dynamics generated by Hariri's arrival, resurrecting its leading role, which suffered during the long absence of its leader. The bloc also invested in the return in reorganizing Dar al-Fatwa, the leading Sunni institution in the country, and reuniting it after a period of division. A new mufti, Sheikh Abdel-Latif Derian, known for his closeness to the kingdom, was elected Aug. 10, two days after Hariri’s return.

Hariri went back to Saudi Arabia a week after arriving in Lebanon. Was his return to Beirut in fact no more than a visit? People close to him have confirmed that his return to Lebanon is imminent and will be for a longer stay. Its determination, however, especially in regard to his personal security, depends on developments in the Saudi-Iranian dialogue.