In his first public appearance at this year’s UN General Assembly, the Iranian president suggested that a nuclear deal would transform US-Iran relations but said that failure to reach agreement by the deadline did not mean that the two countries would automatically revert to the hostility of the past. 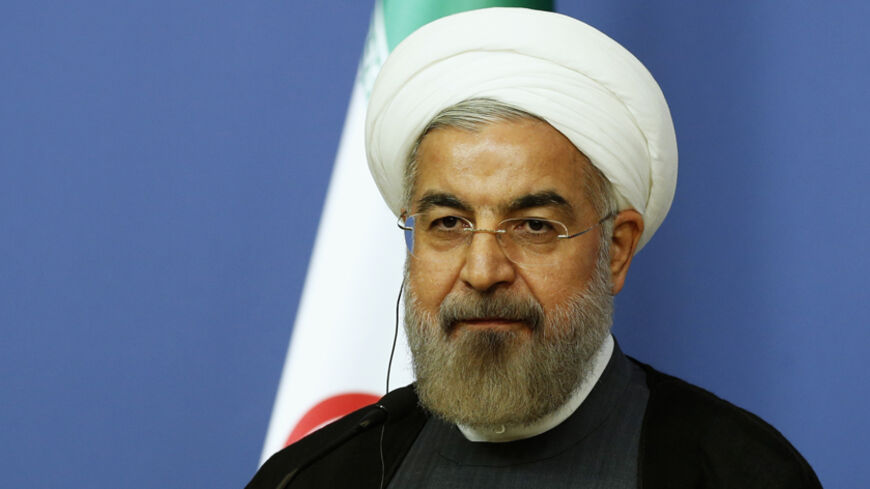 Iranian President Hassan Rouhani said US and Arab airstrikes against the group calling itself the Islamic State (IS) in Syria “do not have any legal standing,” but refrained from endorsing Syrian leader Bashar al-Assad by name, referring instead to the need to work with Syria’s “central government” against terrorism.

Speaking to a group of senior news executives and correspondents Sept. 23 in his first major appearance at the United Nations this year, Rouhani also expressed optimism about the chances for a long-term nuclear agreement and said that relations between the United States and Iran “will be completely different” if such an agreement can be reached.

However, contrary to some press reports that Iran is tying US concessions on the size of its uranium enrichment capacity to cooperation against IS, Rouhani made no such explicit link. If no deal is achieved by the current Nov. 24 deadline, Rouhani suggested that Iran and the United States would not revert to the hostility that preceded his inauguration as president. “Everything is based on the expectation — God willing — that we will reach success,” he said, but added that it “doesn’t mean if we fail to reach agreement, we will go back to the past.”

Rouhani was repeatedly queried about the Syria strikes that took place just a few hours after his arrival in New York. While he noted that such attacks should either be endorsed by the UN Security Council or come at the request of a government — as occurred in Iraq — his condemnation appeared to be pro forma.

At the same time, Rouhani did address the US-led coalition of Sunni Arab states including Saudi Arabia, Bahrain, Jordan, Qatar and the United Arab Emirates, which participated in the strikes.

“Those who played a role in creating these terrorists … how can these same countries today say they want to fight these terrorists?” Rouhani asked, alluding to financial and other support provided by Sunni Arabs to assorted Syrian rebels. Earlier, he said, “What the US does is her own prerogative … Iran’s role has been undeniable. As to who is best qualified to lead the coalition, countries in the region are much more qualified” than outsiders.

Asked if Assad was a suitable partner in the fight against IS, however, Rouhani did not endorse the Syrian president by name.

If “we want to bring an end to terrorist activities in Syria … you cannot reach that objective without a central government,” he said, adding, “First, we must drive out the terrorists,” implying a political resolution could come later.

Rouhani did note that there have been recent elections in Syria that included Syrian refugees and other expatriates. The fight against terrorism, Rouhani said, did not mean there was “love” between all of these Syrians and the government.

In response to a question from Al-Monitor, Rouhani acknowledged the importance of Saudi Arabia to the region’s stability or lack thereof. Iranian Foreign Minister Mohammad Javad Zarif, who sat to the Iranian president’s right at the press breakfast — and who has called the US-led coalition against IS a coalition of "repenters" — met Sept. 21 with Saudi Foreign Minister Saud al-Faisal in the highest level contact between the two countries in many years.

Relations between Saudi Arabia and Iran — whose rivalry has been a major factor in fueling sectarian violence in the region— are “not within the level expected by the people of the two nations,” Rouhani said. “The relationship deserves to be warmer.” He predicted that there would be an improvement, saying, “Within the next few months, our relations will grow closer.”

Al-Monitor also queried Rouhani about the nuclear talks and asked whether Iranian opponents of his government had failed to release detained Washington Post reporter Jason Rezaian and his wife in an effort to embarrass Rouhani and undercut his ability to reach a nuclear agreement and reconcile with the United States.

On the nuclear question, Rouhani said it was not just a matter of differences over a few thousand centrifuges but the execution of an agreement and the time frame for it. Nevertheless, he added, “if there is goodwill and seriousness … I do believe in the next two months, we can” achieve a long-term agreement.

“This week is an important week that will clarify many things,” Rouhani added, alluding to the many bilateral and multilateral meetings between the five permanent members of the UN Security Council plus Germany and Iran taking place in and around the world body’s headquarters. “Both sides have reached the conclusion … that a final resolution will be for the betterment” of everyone, he said.

One requirement, Rouhani indicated later, was lifting UN Security Council sanctions imposed on Iran “within an acceptable time frame.” He also mentioned the Arak reactor, where Iran has lately backpedaled on possible alterations that would reduce its output of plutonium in a possible ploy to achieve its major goal of holding onto 9,400 operating centrifuges at another facility in Natanz.

“The differences are not so difficult as to be unresolvable, but not so simple to be resolved in a few meetings,” Rouhani said, confirming indications that negotiations will likely go down to the wire.

For US-Iran relations, Rouhani suggested, a nuclear deal could be transformative.

“I have no doubt that the situation between the US and Iran will be completely different,” he said, predicting “extremely effective and positive” changes in “economic affairs, trade and the political arena. … We can with more security speak about international affairs.”

Rouhani said without elaborating that he had a very detailed conversation about other potential areas of collaboration with President Barack Obama on the phone last year at the conclusion of Rouhani’s first visit to the UN General Assembly as the Iranian president. No preparations have been made for a similar conversation in person this year, Rouhani said.

While he acknowledged that any nuclear deal would face domestic opposition in both countries, Rouhani predicted that both countries would eventually embrace an agreement as they did last year’s interim accord.

“After the dust settled, we never saw any thorns, only roses,” he said. “The aroma of these roses will be pleasant for all” and the “prolonged result will be a success for everyone.”

As for Rezaian and his wife, Yeganeh Salehi, who is also a journalist, Rouhani said, “I do not believe [their detention] was something preprogrammed against my administration.” Rouhani noted that the Iranian judiciary had not yet leveled any charges against the couple. “I am hopeful and quite optimistic that now and in the future the judiciary will comport itself in a fair … manner.”

When Washington Post editor Marty Baron pressed the issue further, asking how it was possible that such a “good journalist and good person” could be detained without charge for two months, Rouhani said he hoped that Rezaian and his wife were “as comfortable as possible under the circumstances” and that a judgment would come “as soon as possible.”

The International Campaign for Human Rights in Iran, a New York-based group, has reported that family members who have gotten to see the couple recently were shocked by how much weight they had lost.