Iran’s president said a nuclear agreement would open the prospect of more cooperation with the United States but criticized the American decision to give more support to Syrian rebels, warning that it could spawn more terrorism. 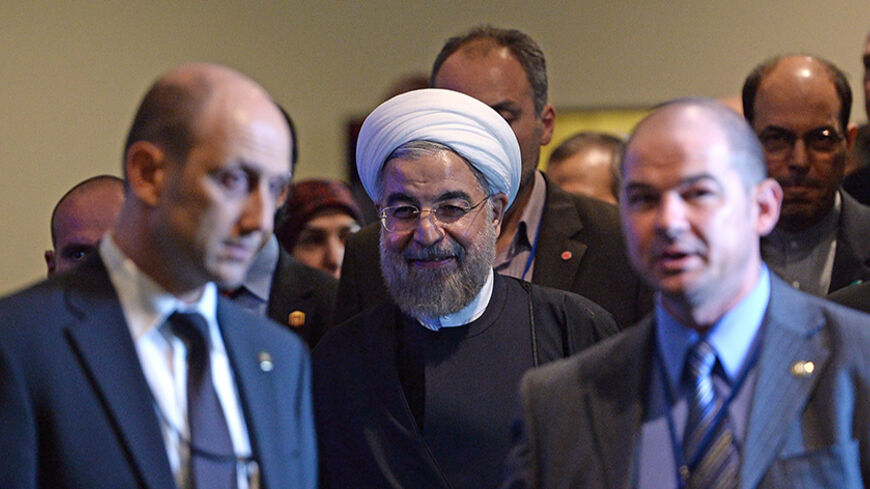 Iran's President Hassan Rouhani (C) is escorted for a meeting with UN Secretary-General Ban Ki-moon on the sidelines of the UN General Assembly in New York, Sept. 23, 2014. - REUTERS/Jewel Samad

Iranian President Hassan Rouhani put forward his prescription for defeating the group that calls itself the Islamic State (IS), saying that local Iraqi and Syrian central government forces must be in the lead and that the United States was creating a new “terrorist group” by training and equipping members of the Free Syrian Army.

Speaking to a large audience of Americans and Iranian Americans in a New York City ballroom on Sept. 24, Rouhani did not reply when asked if he had heard President Barack Obama offer his own ideas for eradicating Islamic extremism in a major speech just hours earlier before the UN General Assembly.

US President Barack Obama spoke of the need for Muslim communities “to explicitly, forcefully and consistently reject the ideology of al-Qaeda and ISIL [another acronym for IS]” by accommodating “devout faith with a modern, multicultural world.” But Obama also said in relation to IS that “the only language understood by killers like this is the language of force.”

While there was a certain overlap in their views in terms of advocating political inclusiveness in Iraq and Syria, Rouhani suggested that the bombardment of IS in Syria by a US-led coalition might backfire and produce more terrorist organizations.

He specifically criticized the Obama administration for announcing that it would offer more training and arms to Syrian rebels to confront IS, which Rouhani referred to by its Arabic initials, Daesh.

“The American authorities have announced they wish to train another terrorist group to send them to Syria to fight,” Rouhani said. Asked by moderator Fareed Zakaria if he meant the Free Syrian Army, Rouhani said, “Call it what you like. … We must put the burden on the shoulder of the Syrian people, not make decisions for them and announce it to them.”

Airstrikes, he added, “may yield desired results in the short term but in the long term will only create tragedies.”

Rouhani was even tougher in his speech before the UN General Assembly on Sept. 25, asserting that, “Certain intelligence agencies have put blades in the hand of madmen, who now spare no one.”

As he did on Sept. 23 in comments to senior news executives and correspondents, Rouhani suggested to the audience at the New York Hilton that Iran had been in the lead in combating IS by offering early assistance to the Iraqi government after the group seized Mosul in June. He praised the new Iraqi government for its inclusiveness but sidestepped questions about the fairness of a recent election that reconfirmed Bashar al-Assad as president of Syria. Rouhani also would not say whether Assad must step down to permit formation of a government that more Syrians could support.

On the issue of nuclear negotiations, Rouhani echoed Obama in saying both the United States and Iran needed to seize the opportunity to resolve the issue.

"Today we are faced with a very good opportunity," Rouhani said. "A new atmosphere was created, and we all must make good use of it, Iran and the P5+1 [the five permanent members of the UN Security Council plus Germany], everyone together.

Thanks to the interim deal reached last year, conflict between the United States and Iran has decreased, Rouhani said.

"We still have two months [before the Nov. 24 deadline for a long-term deal]," Rouhani said. "We, all of us, must all take best advantage of this opportunity. All of the countries that can play a role, must help and assist ... in order to reach a final agreement."

Rouhani declined to go into specifics on differences between the two sides on Iran’s enrichment capacity. In meetings in New York over the past five days, the United States and Iran had discussed various creative solutions to try to bridge the gap, but little substantive progress had yet been achieved, a former US official told Al-Monitor. Before his speech Sept. 24, Rouhani met with European Union foreign policy chief Catherine Ashton, the chief international negotiator for the six world powers. Some sources expected a ministerial level P5+1 Iran meeting to be held on Sept. 25 or 26.

In his speech to the UN on Sept. 25, Rouhani warned the United States not to demand too much of Iran.

“The people of Iran are devoted to certain principles and values at the apex of which are independence, development and national pride,” Rouhani said. “Our people evaluate the behavior of their government based on the same criteria. If this obvious national fact is not understood by our negotiating partners and they commit grievous miscalculations in the process, a historic and exceptional opportunity will be lost. ”

In his speech to the General Assembly, Obama urged Iran to “take this historic opportunity” to reach an agreement, adding, “We can reach a solution that meets your energy needs while assuring the world that your program is peaceful.”

Rouhani said he and Obama had agreed in a historic telephone conversation last year that in the future, the United States and Iran could cooperate in other areas. But first they needed to reach a nuclear deal.

"I told him, 'I wholeheartedly agree. In the future, we must cooperate.’ But, we have a saying in Persian, 'Let's first raise the baby we gave birth to, and then move on to the second,'" Rouhani said.

Obama, Rouhani said, agreed with him.

"The concept is that there are many potential areas of cooperation in the future," Rouhani said. While some Americans and Iranians mistrust each other because of past disagreements and tensions, a few successes could change views and help transform relations.

A day earlier, Rouhani was even more effusive, saying, “I have no doubt that the situation between the US and Iran will be completely different [if a nuclear deal can be clinched]."

On several key regional issues, the United States and Iran already appear to be more in agreement than apart.

One of those issues is Afghanistan, where contested elections have yielded a fragile unity government between President-elect Ashraf Ghani and a new chief executive, Abdullah Abdullah.

“We’re happy we have witnessed a coalition between the two camps,” Rouhani said. “We hope it will behave in such a way … as to seek what their people are worthy of.” The Iranian leader warned, however, that coalitions are “breakable” and said all countries should do what they can to support the new government.

Iran is strongly impacted by the lack of stability in Afghanistan and fears for its future. Iran hosts some 3 million Afghan refugees and has also been inundated by narcotics produced by its neighbor.

The United States and Iran also appear to have similar views about Egypt, where the government of Abdel Fattah al-Sisi has tried to eliminate any political role for the Muslim Brotherhood.

While Rouhani would not pass judgment on the elections that brought Sisi to power after a coup that removed Muslim Brotherhood President Mohammed Morsi, the Iranian leader noted, “The government of Egypt has labeled the Muslim Brotherhood a terrorist group. We do not believe that.”

Rouhani advised Egypt to try to “attract the Muslim Brotherhood” instead of suppressing it, noting that it is a “big group with many loyal followers. … We must all strive … so that every Egyptian feels compelled to participate in elections in the future.”