In a wide-ranging conversation with senior representatives of US media, Hassan Rouhani said the nuclear deal, if implemented, could be “something to build on” in US-Iran relations and efforts to resolve other regional conflicts, but offered no details. 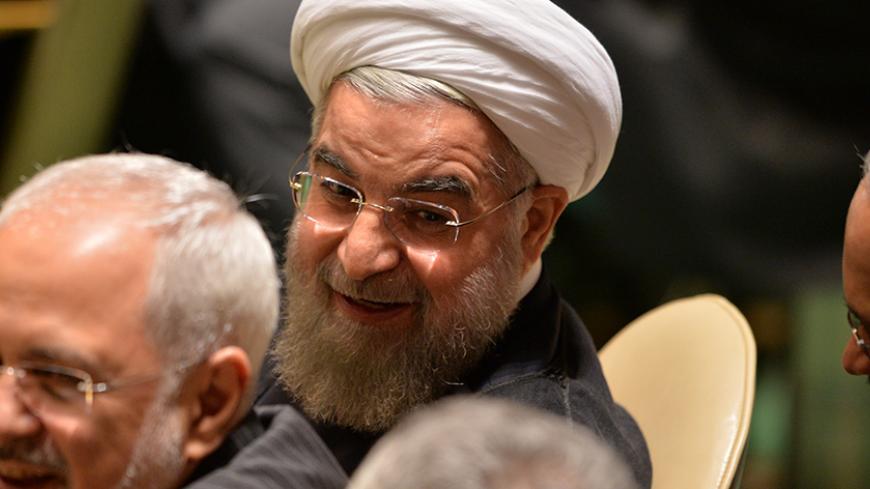 NEW YORK — Iranian President Hassan Rouhani accused Saudi Arabia of “ineptitude” in its handling of religious pilgrims and suggested that the diversion of Saudi military manpower to Yemen might be one reason for the Saudi failure to prevent a stampede near Mecca on Sept. 24 in which hundreds of pilgrims — including many Iranians — died.

Rouhani, in his first public comments since arriving in New York for the annual UN General Assembly, was judiciously diplomatic and vague about many other topics, including the continued detention of three Iranian-Americans, the future trajectory of US-Iran relations and a road map to a political solution in Syria. But when answering questions from senior representatives of the US media Sept. 25, he acknowledged the poor state of Iranian-Saudi relations even before the tragedy at Mina.

“Of course, relations between Saudi Arabia and Iran have worsened because of Yemen,” Rouhani said. While asserting that Iran would not “hesitate” if it saw an opening for diplomacy with the Saudis, he noted, “we are completely opposed” to Saudi military intervention in Yemen.

Rouhani suggested that the preoccupation of the Saudi military with Yemen might have left the kingdom short of experienced manpower to manage the annual pilgrimage known as the hajj. He said the death toll for Iranian pilgrims was at least 140 and might go higher once all the missing are accounted for. The total dead is more than 700, and the incident follows the collapse just weeks ago of a construction crane at the Great Mosque of Mecca, killing more than 100 people.

The Saudis intervened in Yemen in March to push back Shiite Houthi rebels who seized the Yemeni capital, Sanaa, and much of the rest of the country. Saudi military action, which has included heavy bombing that has devastated an already desperately poor nation, was sparked in part by fears that Iranian influence in the region would increase as the result of an impending nuclear agreement with the United States and other major world powers.

Rouhani praised that deal — known as the Joint Comprehensive Plan of Action (JCPOA) — and said that if implemented, it “can be something to build on” to resolve other regional and bilateral issues. But he offered no specifics when pressed about Iran’s priorities going forward.

On US-Iran relations, Rouhani noted that no one could have imagined when he took office two years ago that top officials from the two countries would sit “across from each other for weeks, for months” to reach a historic agreement. However, he sidestepped a question from Al-Monitor about whether he might exchange a handshake with President Barack Obama if their paths happen to cross during UN meetings over the next few days.

In comments to reporters Sept. 24, Ben Rhodes, a deputy national security adviser, ruled out a formal meeting between the two. Rouhani, whose acceptance of a mere phone call from Obama in 2013 aroused opposition from Iranian hard-liners, noted that he and Obama have exchanged numerous letters. Rouhani seemed to suggest that that form of communication would be sufficient for now.

At the United Nations over the next few days, Secretary of State John Kerry and Iranian Foreign Minister Mohammad Javad Zarif are scheduled to meet one-on-one and with other ministers from the five permanent members of the UN Security Council plus Germany (P5+1) to finalize the implementation of the JCPOA.

Majid Takht-Ravanchi, Iran’s deputy foreign minister for European and American affairs and a key negotiator of the nuclear deal, told Al-Monitor separately that Iran and the P5+1 hoped to complete an agreement on the technical aspects of modifying a heavy-water reactor at Arak so that it cannot produce large quantities of plutonium, a potential fuel for weapons. Takht-Ravanchi said that Iran's parliament and Supreme National Security Council must also sign off on the deal, which has survived US congressional scrutiny.

Rouhani was also pressed about the case of Washington Post Tehran correspondent Jason Rezaian, who has been jailed on unspecified charges for 14 months. The Iranian president repeated comments he made before coming to New York to CBS’ 60 Minutes, suggesting there might be a swap of Rezaian and other detained Iranian-Americans for Iranians jailed because of violating US sanctions against Iran.

While Rouhani said he didn’t like the word “exchange,” he said it might be possible for “both governments to render aid, to be helpful to move these files forward … and take actions to set all of these prisoners free.”

Rouhani did not answer a question from Al-Monitor about whether the intelligence branch of the Islamic Revolutionary Guard Corps — which is believed to have arrested Rezaian and numerous Iranian civil society activists — was trying to undermine his authority and inhibit his freedom of action on both domestic and international affairs.

He acknowledged, however, in response to another question about the prolonged house arrest of 2009 presidential candidates Mir Hossein Mousavi and Mehdi Karroubi — as well as limitations on media access for former President Mohammad Khatami — that there are some issues on which “the executive branch cannot by itself make a decision.”

The final arbiter on all key policy questions in Iran is Supreme Leader Ayatollah Ali Khamenei, who has backed the nuclear negotiations but expressed concern that an easing of Iran’s isolation will boost the influence of Westerners advocating the overthrow of Iran’s Islamic regime.

Many of the questions to Rouhani dealt with the multisided war in Syria, which has led to the deaths of more than a quarter of a million people, the displacement of half the population and the worst refugee crisis the world has seen since World War II.

Rouhani said at one point, “We do believe Syria must face new conditions” requiring a change in the “framework” of the government in Damascus. But he added quickly that while stability might require democracy, “democracy cannot be realized without stability. Ballot boxes cannot be placed on a battlefield.”

The Iranian leader, in response to a question about the use of barrel bombs against civilians by the government of Syrian President Bashar al-Assad, said, “I don’t have any such information.”

The Iranian leader also said that Iran has “common objectives” with Russia in Syria in fighting terrorist groups. However, he denied that Iran and Russia have anything “resembling a military coalition” despite a recent buildup of Russian military personnel and weapons in Syria.