Political parties are demanding payments of up to $28,000 for candidates to be included in their electoral lists. 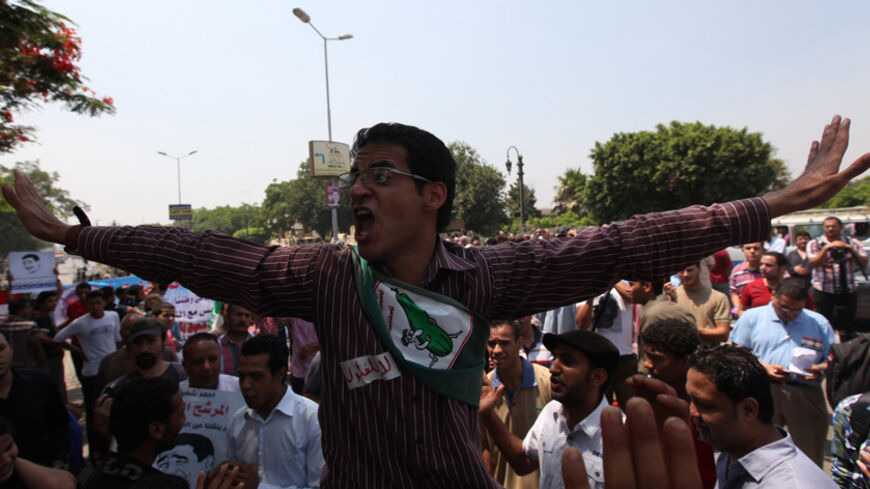 CAIRO — Egypt’s youth, particularly the revolutionary youth, are unable to independently finance their campaigns in the parliamentary elections scheduled by the end of this year. Many were shocked to find out that political parties in alliances led by Amr Moussa have linked inclusion in their lists to a payment of up to 200,000 Egyptian pounds (about $28,000) to limit the conflict between the electoral lists of the new Egyptian parliament and those of businessmen and capitalists, many of whom were associated with the Hosni Mubarak regime.

A number of revolutionary youth have decided against running in the parliamentary elections in the absence of a sponsor for their campaigns.

A number of them count on some Egyptian parties to include them, said Mohammed Attia, a member of the Coalition of Revolutionary Forces’ political bureau, in a phone interview with Al-Monitor. The majority of seats in the parties’ electoral lists will go to wealthy youth who have not worked in politics before, while the January and June revolutionary youth will miss out on this opportunity.

“I gave up the idea of ​​running in the elections after the Conference Party, with which I am affiliated, imposed the payment of 200,000 pounds to include me on its list," Attia said. "There are many others who did not find any partisan support, given that they do not have financial capabilities and the money to manage the electoral campaigns independently. So we gave up the idea of running in the [parliamentary] elections, and we are counting on the upcoming local elections, hoping to find another opportunity to continue with political action.”

Mahmoud Afifi, spokesman for the National Partnership Current (NPC), criticized “some parties in Egypt for blackmailing the revolutionary youth to add them to their electoral lists. He told Al-Monitor over the phone: “Many of the NPC members will run for the elections within the Egyptian Wafd Alliance. So far, it has not asked for any funds, and we expect the alliance to take into account our financial conditions, and to rely on us with other nonfinancial contributions, including our ability to move in the street and mobilize the masses in favor of the list.”

He added: “So far parties have not taken a final decision regarding their electoral alliances, and Moussa is deploying ongoing efforts to unify the civil forces in a single alliance, while the announced alliances are still not concrete and there are no clear lists yet. Moreover, the youth have not taken a decision regarding these lists, and neither have other candidates such as the Copts, women and people with disabilities, where the law stipulates a quota for each category in the lists.”

While a number of youth in political and revolutionary movements have backed off from running in the parliamentary elections to escape the financial campaign pressures, there are many who are still trying to reach parliament, including the spokesman for the Revolution Youth Union, Tamer al-Kadi, who decided to run in the elections in the province of Fayoum.

“Fayoum is one of the toughest constituencies in Egypt as it is considered the stronghold of the Muslim Brotherhood families, and as there are a large number of members of the National [Democratic] Party who are associated with the Mubarak regime,” Kadi told Al-Monitor. “What is opposing my campaign is not just the financial support in the face of other candidates from the Mubarak regime and Islamist [parties] that are able to buy votes, but also campaigns that disfigure the image of all of the January 25 revolutionary youth, that incite people against them, and accuse them of treason to serve the interests of foreign agendas.”

He explained: “I am still looking for an opportunity to be included in a partisan alliance, but chances are small. Unfortunately, despite the fact that the new electoral law gave the youth, Copts, women and people with disabilities the opportunity to be part of the parties’ lists, the splits and conflicts between the parties, in talks to reach new alliances, does not forebode that there will be real electoral lists capable of including us.”

Amr Ali, a member of the Coalition of Revolutionary Forces’ political bureau, told Al-Monitor he was ready to run in the next elections, saying, “It's not just that political parties are not convinced of how important it is to empower the youth in political action, but unfortunately, the political leadership in Egypt does not have confidence in the ability of the youth — despite the two revolutions they started — and in their ability to bring about a genuine change in the Egyptian street.”

Ali added: “Egypt’s president believes that the youth are not ready now, and can not be relied upon. This was confirmed by a number of politicians, with whom we have met recently. This statement is very frustrating."

Ali criticized the Egyptian electoral law that provides the youth with a limited number of parliamentary seats in the parties’ lists, while it gives businessmen and capitalists affiliated with the Mubarak regime, as well as the Muslim Brotherhood and Salafist candidates, greater opportunities through an individual-candidate system.

He said, “It is an unjust law,” and demanded, “the law be amended immediately after it is issued. Unfortunately, this was the mistake of the revolutionary youth from the onset, when they agreed to start a revolution and bring down two regimes without seizing the opportunities of taking part in the rule. None of them took part in the government formation. We are not even allowed to enter parliament. But, the figures and parties currently in power need to expect more serious movements in the coming period from our part, we will regain our rights.”

If Egyptian political parties do not trust the youth enough to include them, then the parties' leaders are still unable to succeed in controlling the political scene and in assuming active roles. They could not reach a consensus on the alliances map, based on which they will form their electoral lists. This has pushed a number of party leaders to ask for the postponement of the elections, but this demand was not approved by the Egyptian president.