President Obama, in a dinner with foreign policy experts, laid out a comprehensive, long-term strategy to combat the Islamic State in Iraq and Syria, saying the terrorist group must be defeated, not contained. 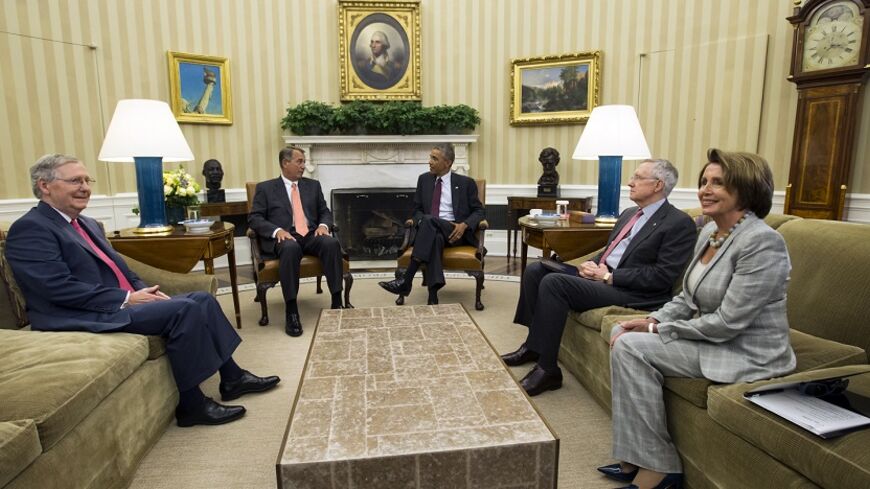 US President Barack Obama meets with congressional leaders in the Oval Office of the White House in Washington to discuss his plan to combat Islamic State militants operating in Iraq and Syria, Sept. 9, 2014. - REUTERS/Kevin Lamarque

WASHINGTON — President Barack Obama, ahead of an address to the nation Wednesday, laid out a comprehensive, long-term strategy to "take down" Islamic State (IS) militants in a dinner with foreign policy experts at the White House Monday night, in which he expressed optimism about the forging of a US-led coalition to combat the IS threat.

There was a “big emphasis on a comprehensive approach, not trying to divide the problem and solve it in this country and that country,” Strobe Talbott, president of the Brookings Institution, told Al-Monitor.

“ISIS is not just a game changer; it is a game changer of almost unique danger, not just for the region, but for the world … because of the nature of the phenomenon, the way it spreads, its brutality and destabilization of countries important to the US,” Talbott said. “Therefore, it is not enough to contain it. … There has got to be a take-down.”

Another attendee at the dinner “came out very impressed with the way that the president has pulled together the various pieces that are in flux on this,” a source, speaking not for attribution, told Al-Monitor. “The president does have his arms wrapped around this, and will lay out a pretty comprehensive, long-term strategy,” involving a military component, going after IS financing, foreign fighters and the ideological side.

"While he sees the magnitude of the challenge, the effort and time it’s going to take, he sounded an unequivocal note of optimism about the way various regional players are coming together behind the US-led initiative,” Talbott said.

Boosting traction in getting regional sign-on to combat IS is the new leadership in Iraq and the departure as prime minister of Nouri al-Maliki, who was seen as highly sectarian by Sunni countries.

Secretary of State John Kerry, who attended the dinner hosted by Obama and Vice President Joe Biden Monday night, traveled Tuesday to Jordan and Saudi Arabia, which will host a conference of countries on combating IS on Sept. 11. Other stops are likely to be added to Kerry’s itinerary, the State Department said.

Regarding whether Iran would — either tacitly or explicitly — be part of a regional coalition combating IS, the Obama administration remains focused on trying to get a nuclear deal with Iran. Any tactical coordination with Iran on the ground in Iraq is unlikely to translate into bringing Iran into a broader regional effort, the sources said.

“The Iranians have their own reasons for not wanting to see ISIS thrive,” Talbott said. “There is going to be an effort to keep intact the policy with regard to Iran and with regard to Syria, without cutting slack to the regime with which we have major problems on this, in order to get cooperation.”

The first half of the discussion, over a dinner of Chilean sea bass Monday night, was on Obama's strategy to combat IS, the other part on Ukraine.

A new ABC/Washington Post poll shows a spike in American public support for US military action against IS, with some 71% of Americans saying they support US airstrikes in Iraq, and 65% supporting US airstrikes in Syria. The more aggressive US public mood has been fueled in part by horrific videos of IS beheading US journalists James Foley and Steven Sotloff. Obama is likely to caution the public in his address Sept. 10, however, that there are likely to be more such IS attempts to horrify and demoralize the US public, especially as US military action expands.

“I think there was a shared sense among folks at the dinner that these are provocations by ISIL [IS], and they will continue as you go after them,” the source briefed on the dinner said. IS has “this PR machine. And that is just going to be difficult. The president will address that also.”

Obama “will answer that challenge tomorrow, by putting the pieces together for the American people and showing them the bigger picture,” the source said.

Obama also met with congressional leaders on Sept. 9 to discuss his strategy to combat IS, during which he asserted that he does not need congressional authorization to expand US military action against IS.

“The President told the Leaders that he has the authority he needs to take action against [IS] in accordance with the mission he will lay out in his address tomorrow night,” the White House said in a read out of the meeting Sept. 9. “The President told the Leaders that he would welcome action by the Congress that would aid the overall effort and demonstrate to the world that the United States is united in defeating the threat from [IS].”