US continues to curb its involvement in Middle East

US President Barack Obama's speech on attacking the Islamic State reflects the US regional strategy on Iraq, Syria and the Israeli-Palestinian conflict: partial engagement only, since radical Islam and conflicts in the Middle East are first and foremost a regional problem. 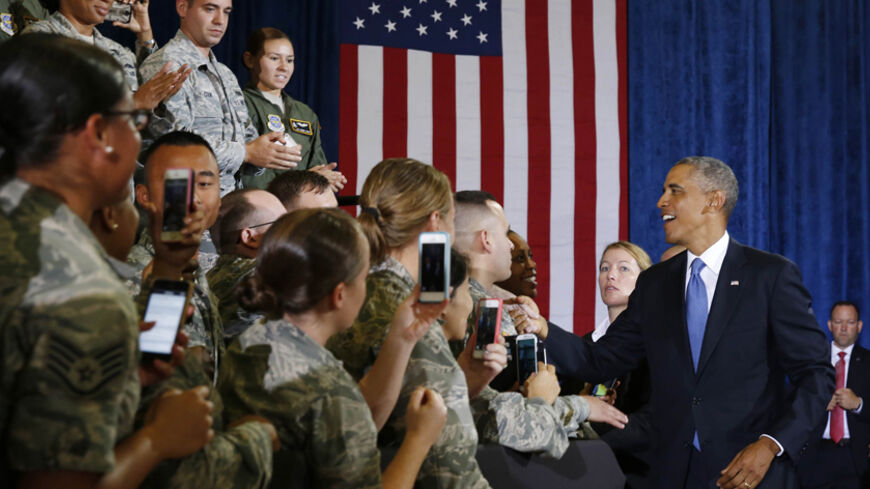 US President Barack Obama shakes hands before speaking after a military briefing at US Central Command at MacDill Air Force Base in Tampa, Florida, Sept. 17, 2014. - REUTERS/Larry Downing

"Is America back?" This was the question many Middle East analysts asked themselves after President Barack Obama's policy speech on confronting the Islamic State (IS). "No, absolutely not," a White House source told Al-Monitor.

According to US administration Middle East analysts, Obama made his decision on the airstrikes against IS with restrained enthusiasm. "It's not in his DNA," said the White House source. ''He believes in collective diplomacy for conflict resolution and is also driven by moral considerations.''

Yet, Obama was left with little choice — the genocidal attacks against religious minorities and the beheading of Western journalists were too much to stomach. The timing was also conducive to his decision, as weeks before the midterm elections (Nov. 4), US public opinion swayed in favor of military intervention in Iraq and Syria.

The president curbed the US intervention by deciding in advance against a grand operation, and by conditioning the intervention both on an international and a regional coalition.

State Department sources say that the United States will intervene in a measured way according to its own security interest; it is not striving to defend the interests of thankless Arab states, or to be the policeman of the region.

Washington does not have a uniform view of Islam; it is opposed to radical Islam, but believes that the majority of the Arab states are pragmatic and that it is their duty to confront radicalism. Better governance, power-sharing, less corruption, the rule of law and a single security force can serve the pragmatic states in defeating the fundamentalists. The IS threat is first and foremost faced by the Arab and Muslim world, not by the West or the United States. It is a problem born from within, not from without, and its ambitions are primarily regional. So the United States, while re-engaging, is more out than in, and rightly so.

The same is true for the Israeli-Palestinian arena. The United States is engaging with Israel on security matters in the aftermath of the Gaza war and with the Palestinians on the new policy initiative put forth by President Mahmoud Abbas. Both are handled with politeness and restraint. Israel’s importance grows in the run-up to the US midterm elections. But photo opportunities aside, Washington has given up on convincing Israeli Prime Minister Benjamin Netanyahu to engage in a serious peace process. At most, the administration will be active in cutting losses resulting from the settlement policies.

As for Abbas, while there is respect for him in Washington and a genuine desire to see him strengthened, there is little appetite to accept his deadline for an end to the occupation. The most the United States will engage in is a political dialogue, economic assistance and a role for Fatah in Gaza. As for Palestinian statehood in the foreseeable future, it will only be lip service. So here, too, the United States is more out than in.

The same White House sources claim that Israel and Palestine could have been on the path to conflict resolution a long time ago. The refusal to take courageous compromise decisions by both sides has left them with serious predicaments: Israel is challenged in its very identity as a Jewish democracy by the settlers, and Palestine is challenged in its identity by fundamentalists. In the end, these are Israeli and Palestinian predicaments, not American ones, say the skeptics in Washington.

Twenty-one years have passed since the signing of the Oslo Accord at the White House (Sept. 13, 1993); it has been 21 years since there was courageous leadership in Israel and Palestine — leadership that understood that a peaceful two-state solution is an existential Israeli and Palestinian interest, not an American one. Indeed, in the three years of the Oslo process, the Americans were facilitators of great importance but were not part of the talks themselves and did not aspire to replace the parties. That is still the US attitude today.

The Abbas government is extremely concerned with the US disengagement from the peace process, the international focus on Syria and Iraq, the strengthening of Hamas in the West Bank and Israeli settlement policies.

According to senior sources in Ramallah, the Palestinian Authority is launching an international diplomatic campaign with an address by Abbas at the UN General Assembly at the end of the month. The Palestinian message is that the only possible two-state solution is the one based on the 1967 lines, with only minor, parallel land swaps and East Jerusalem as the capital. The two main target audiences for this campaign are the European Union and the Israeli public opinion.

Internationally, the Palestinians aim to isolate the United States and Israel in their opposition to Abbas’ three-year timeline to end the occupation. As for Israel, the Palestinians want to make it clear to the Israeli constituency, which is possibly going to elections in 2015, what the meaning of a two-state solution is — with the 1967 lines at its heart.